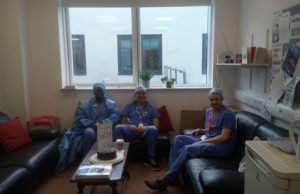 The departmental coffee room has always been the “hub” of any anaesthetic department. I qualified in 1984, and started my career in anaesthesia a year later. I have been lucky to work in Kent, Nottingham, Derby, Leicester, Peterborough, as well as spells in Holland and San Francisco. As a trainee the department secretaries always took the novices under their wing. Registrars would advise on all aspects of hospital life, and the coffee room was the place where all grades would meet and discuss clinical and non-clinical matters.

I was a registrar in Peterborough, and one of the reasons I jumped at the opportunity to go back was the welcome I had received as a registrar on the Leicester rotation. The filter coffee was often 10 molar, but it was regularly filled up. When the department office doubled as the coffee room and on call room it was always a pleasant surprise to be woken up by the coffee machine being turned on, when you were trying to get a bit of sleep during a 24 hour on call shift.

In 2010, a new PFI hospital was opened in Peterborough. The new anaesthesia department had some offices, but there was no kitchen, not even a sink, and no communal space for anaesthetists to socialise, wind down, and chat amongst ourselves. No kettles were allowed, and refreshments were meant to be purchased from outlets, which were all run by the organisation which had built, and was running, the hospital.

Six years later, we were fortunate to be managed by a former nurse, who I had known 17 years earlier when I was a registrar. She was somebody who had organisational memory and realised that morale was low. She approached me and asked me what I thought could be done to improve morale. My immediate reply was to try and get the departmental coffee room back. We had no sink, so we decided to go down the disposable cup route, and use large 5 litre water containers that could be filled from a ward about 100 yards away. The manager sourced a fridge and microwave for us, we had some furniture that we had purchased in case the consultants had to sleep in, and I went to well known wholesaler to buy some Yorkshire Tea and Gold Blend coffee.

It was important that the consultants paid for the supplies, the only proviso was a monthly charity collection, a suggested amount of £1 a day, for those using the coffee and tea. We have collected for Epilepsy Research, Heltwaite School, Malaria Nets, and the usual Christmas/New Year collection for The Peterborough Soup Kitchen.

I was very pleased to be awarded “Trust Employee of The Month“ in November 2018, nominated by colleagues for setting up the coffee room. Our manager, Kay Ruggerio, deserves a lot of credit and the support from all my colleagues and trainees who have worked with us over the last three years. We have our own cleaning supplies and I have come in at weekends, with my wife, to clean the fridge thoroughly and vacuum behind the sofas.

I hope that all those who design hospitals make sure that communal spaces for doctors are promoted. The Association of Anaesthetists (I am a former Honorary Secretary and Vice President) has always promoted close cooperation between grades and they have an ongoing campaign to promote “coffee and gas.”

On an environmental front, there is a Costa coffee shop in the hospital who now recycle our disposable cups, so we all feel a little less guilty. We have bought some nice storage cabinets and we have a secondhand coffee table, which has made it look more homely.

It is a relatively minor development and the costs were minimal, but the coffee room has been a success and I think has restored morale in our department. I am sure that many anaesthesia departments would echo my sentiments.