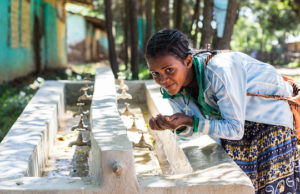 It is easy for us to take for granted that everyone understands that clean water and decent sanitation should be indispensable elements of our everyday lives, but this wasn’t always the case.

London in the first half of the 19th century was to mark a turning point. The British capital at the time stank, with raw sewage flowing through the streets and routinely dumped in the River Thames. Cholera had first struck the city in 1832 and returned with a vengeance in Soho on the last day of August 1854 claiming 127 lives over the next three days. The year before, over 10,000 people died of the disease in London and Newcastle.

At the time, the miasma theory—that illness was caused by poisonous bad smells—was medical orthodoxy.

It was the work of physician John Snow that finally proved disease was not spread through “bad air,” but was due to contaminated water, much of which came from the Thames. After famously recording the 1854 deaths onto a map of Soho, he discovered that mortality clustered around a water pump and persuaded the local council to remove the pump handle.

Snow’s supposition that contaminated water caused cholera was not immediately accepted, but the timing of his discovery chimed neatly with an emergence of public health initiatives.

Visionaries like Edwin Chadwick had played a key role in the 1848 Public Health Act, which acknowledged, for the first time, that the state should be responsible for the health and wellbeing of its citizens.

The hot summer of 1854 led to the Great Stink where the smell of the open sewer that was the Thames became so overwhelming, it forced MPs to suspend Parliament and galvanised action. They quickly passed a bill that paved the way for London’s first sewage system, leading to engineer Joseph Bazalgette’s visionary system—which transported the city’s waste to the open sea.

When another outbreak of cholera hit the city in 1866, it was confined to a small section of the East End that was not connected to the new sewer system, thus proving Snow’s theory.

Around the same time in the 1840s, Hungarian physician Ignaz Semmelweis was working on his own theories concerning the importance of handwashing. He had noticed that in the maternity unit at the General Hospital in Vienna, the rates of childbed fever (puerperal fever) were much higher amongst those delivered by doctors or medical students rather than midwives. The doctors were treating new mothers immediately after dissecting corpses, without first washing their hands. When Semmelweis imposed rigorous handwashing rules, the number of deaths immediately dropped from 18 per cent to 2 per cent and Semmelweis became known as the “saviour of the mothers.” Despite these striking results, the medical establishment did not accept Semmelweis’s findings for another couple of decades.

It’s nigh on 160 years since these world changing developments, yet there are still parts of the world where clean water and decent toilets seem like a distant dream. Astonishingly one in four healthcare facilities still doesn’t have clean water and an estimated 1.5 billion people use healthcare facilities with no sanitation service, exposing them to an increased risk of infection.

At household level, around 785 million people have to walk for more than half an hour for clean water, while a staggering 2 billion live without basic sanitation and nearly 673 million defecate in the open. The resulting diarrhoeal diseases claims the lives of 800 children every single day, and a lack of water and sanitation is a major factor in several neglected tropical diseases.

Although today’s world is very different to 19th century Britain, there are clear parallels in how sanitary reform has developed. Rapid urbanisation is still a major factor in poor sanitation with under-five mortality rates in city slums often worse than in rural areas. And political prioritisation remains crucial in effecting largescale change.

Such was the case in South Korea, Malaysia and Singapore in the 1950s and 60s, until governments realised investment in sanitation not only improved public health, but also boosted economic growth. These countries launched major campaigns to drive public awareness: Keep Singapore Clean and Let’s Try to Live Well in South Korea.

As well as working with communities to build facilities, WaterAid works on a national and international scale, advising and convincing governments to prioritise water, sanitation and hygiene, as well as linking policy makers with people on the ground so there is effective implementation. This work has been accelerated by the agreement of world leaders in 2015 to work towards the Sustainable Development Goals (SDGs), which aim to end extreme poverty by 2030, with Goal 6 being dedicated to water and sanitation.

As we enter 2020, progress is happening but not fast enough to meet the 2030 vision. This is particularly the case for sanitation where progress is mostly slow.

Whilst ordinary people, local champions and visionaries like Chadwick, Snow and Semmelweis helped change accepted thinking, it is only when combined with a political will to ensure sufficient resources and ambition that large-scale change happens. The medical establishment can help play a powerful role in driving that change.

The BMJ’s readers can help by donating to WaterAid this Christmas: please give generously.