It was a crisp autumn New England day, and I left my desk in my research office at Boston Medical Center and walked through the empty side streets of Boston’s South End in search of a cup of coffee.  As I was returning to my office, I caught a glimpse of dozens of protesters standing in front of the hospital. About an hour earlier, I had been looking out the large picture windows of our Section of General Medicine’s lunch room as I microwaved my meal. Massachusetts Avenue, a major thoroughfare in the city, had been blocked off in preparation for Melania Trump’s visit to Boston Medical Center. The public had been told that Ms. Trump was coming to tour the hospital and learn about our cuddling program to nurture babies born with neonatal abstinence syndrome. Motorcades of black SUVs and police vehicles whirred by, and police shooed away the homeless and opioid-addicted denizens of the neighborhood in preparation for the First Lady’s visit.

I was struck by the sight of my colleagues protesting, and took out my phone, snapped a picture, and posted it on Facebook and Twitter. On Twitter I wrote “Protesting Melania Trump’s visit to Boston Medical Center @The_BMC.”  I didn’t give my tweet much thought—this is just what I did, it seemed like an important event to document. In retrospect my tweet is ambiguous-was I protesting too? I then joined and chatted with the protesters. Colleagues held signs saying things like “who is going to cuddle the babies in the ICE detention centers?” and “Our BMC cares for all patients.”  I hadn’t planned to attend the protest and thus didn’t have a sign to carry. It was oddly quiet; there were no chants of protest, perhaps this had been agreed upon ahead of time?

The day before, there had been a heated discussion among the doctors, nurse practitioners, and social workers in our primary care suite about the upcoming visit. I felt that it was reasonable for the hospital to host the visit, but at the same time I was somehow troubled by it. I didn’t recall any visits from the First Lady when I was an intern at this hospital in the mid 1990s, caring for African-American women with HIV and addiction to crack cocaine. Finding it challenging to have an in-depth political discussion in the midst of a busy primary care session, I didn’t fully engage in the discussion.

Several hours after attending the protest and posting a photo on Twitter, I received an e-mail from my social work colleague that my name and tweet had been mentioned in coverage of the protest by Newsweek.com: “BMC primary care doctor and health disparities researcher Karen Lasser, also a professor of medicine and public health and daughter of immigrants, according to her Twitter profile, shared a photo of the demonstration.” My tweets usually consist of a retweeted New York Times article, and garner at most a handful of “likes.” I had inadvertently stumbled into the Twitter major-leagues.  As I write this essay, my Tweet has been retweeted 48 times, there are 241 comments, and 221 likes.

I have received hate mail in the past, as some of my research has been critical of the tobacco, pharmaceutical, and insurance industries’ role in healthcare. The comments on my tweet about Melania Trump’s visit, including some posted by internet “trolls,” are a barrage of hate. A number of the comments raise the inflammatory concern that “left-wing doctors” will provide inferior care to Republican patients. In my nearly 25 years practising medicine, only one patient I’ve cared for wore a pin indicating she was a Republican. Politics has always stayed out of the exam room. I recall wincing at a large tattoo on the chest of a patient—not necessarily a Republican—that read “white power.” He was seeing me to receive treatment for his hepatitis C infection and for his opioid use disorder. Research has actually shown that chronic use of prescription opioid drugs was correlated with support for the Republican candidate in the 2016 US presidential election. [1]

Another recurrent theme in the responses to my tweet was that doctors should be taking care of their patients instead of protesting. This comment made me recall the National Rifle Association’s message to “anti-gun” doctors that they “stay in their lane” after they had published papers about firearm injuries and deaths and issued recommendations to reduce gun violence. [2] Just as emergency department physicians and surgeons who care for patients with gunshot wounds have been speaking out about gun control, physicians who care for immigrant patients feel compelled to speak out.  Most of my patients are immigrants from the Dominican Republic, and other Central and South American countries. While my patients have not discussed with me the effect of immigration policies on their lives (perhaps an effect of living in the “sanctuary state” of Massachusetts), my colleagues across the US have raised serious concerns. They have observed that immigrants are avoiding medical visits and withdrawing from public benefit programs out of fear of possible deportation, in response to increasingly aggressive immigration enforcement. [3]

What had my encounter with the protest at Boston Medical Center taught me? It seems, that in these times when there are assaults on human rights and so much hate, it’s important that doctors use their voices judiciously, so as not to lose credibility. I realized I had some ambivalence about protesting. Had it been President Trump visiting I would have protested, and not just on Twitter. But is Melania Trump culpable for her husband’s words and actions? No one can know the interior workings of another’s marriage.

As I was driving with my 12 year old daughter, the American singer-songwriter Taylor Swift spoke to me from the radio:

“Say it in the street that’s a knockout.

But you say it in a Tweet that’s a cop-out.” 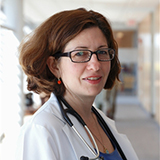