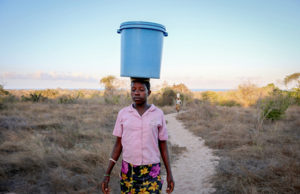 WaterAid is often referred to as a single issue organisation, and it’s true; we are incredibly focused on making clean water, decent toilets, and good hygiene for everyone, everywhere a reality.

But while our focus might be narrow, the impact is huge. This one issue has an enormous impact on people’s lives, yet one in ten people around the world still lack access to clean water close to home, and one in four have no decent sanitation. And when that changes? The effects will be immeasurable.

Every single day, 800 children under the age of five die from diarrhoeal diseases caused by dirty water and poor sanitation. Many more will miss school because they have to spend hours collecting water or fall ill from drinking dirty water.

When a community gets clean water for the first time, it creates a powerful ripple effect, improving people’s health, education, and livelihoods. It means children can stay healthy and in school, and both men and women have time to work and earn a decent living for their families.

Having decent facilities in schools improves attendance and performance; and having clean water and good sanitation in hospitals means doctors and nurses can provide good healthcare and prevent the spread of infection, while mothers can give birth safely in clean environments.

For many people in the countries where WaterAid works, their first waking thought is of water. Hagira is 15 years old and lives in Nacapa, a village in the Nampula province of Mozambique, where access to water is a big challenge.

Each day, she makes the long walk to a hand-dug well, queuing in the intense heat before collecting buckets of dirty water to carry back to her village her families. The well is too dangerous for younger children, so it’s often young women and older girls who take on this responsibility.

WaterAid and community leaders in Nampula have been working together to create an infrastructure that will provide clean water to the populous area. They agreed on a mini aqueduct system served by a large storage tank, and after consulting with the local community, WaterAid proposed a system that harnesses one of Mozambique’s most abundant resources, the sun. This idea should work well for Nacapa, where there is no other reliable source of electricity.

When a system of clean, accessible, and reliable drinking water is built in a community that has never had it before, it frees up time once swallowed up walking for water and caring for children made sick by that same water. Women and girls, who the burden of collecting water often falls to, can focus on other things; unleash their creativity; become innovators and leaders.

When this system is built, Hagira will no longer have to make the arduous journey to the unsafe well every morning and can focus on her schooling and future:

“I like the lessons at school,” says Hagira. “When I finish, I want to be a teacher and teach other children to read and write.”

In Mozambique, over half the population—around 13.1 million people—are still living without clean water; 21 million don’t have a decent toilet and nearly 2,000 children under five die every year from diarrhoea caused by dirty water and poor toilets. Despite recent efforts from the Government, low investment and capacity in water infrastructure makes building and maintaining services difficult, and support is needed to make its commitments and plans a reality.

Water, sanitation, and hygiene underpin all areas of development and are the foundations to a better future. At WaterAid, we work globally to tackle the reasons why millions of the world’s poorest people live without these vital services, and work with local partners in 28 countries to transform millions of lives every year by improving access to clean water, toilets, and hygiene.

We also campaign tirelessly to make sure that taps and toilets are at the top of the political agenda, and that governments recognise that access to clean water and sanitation is crucial to eradicating poverty.

Through our work in countries like Mozambique, we see that water is just the beginning

Maybe it is a single issue. But we believe it is the single most important issue we face today.

The BMJ’s readers can help by donating to WaterAid this Christmas: please give generously.