As I reported last week, drug shortages, recently in the news, are not new at all. They have been with us for many years, although they have certainly got worse in the last 10 years or so.

In our recent editorial in The BMJ, Robin Ferner, Carl Heneghan, and I reported current information about current global shortages. Here’s what we said: in Australia prescribers face critical shortages of 56 medicines; around 5% of licensed medicinal formulations are unavailable in Belgium; in 2018 there were 769 shortages in the Netherlands; in 2018 in France regulators managed 871 shortages, compared with 405 in 2016; in the USA 213 products are currently in short supply; and in the UK over 900 formulations have been in short supply since 2014 for periods of weeks to months, some indefinitely.

In a previous restricted PubMed search, reported last week, I looked for papers whose titles referred to shortages of drugs or medicines. I have now broadened my search to all papers with the word “shortage/s” in the title, just over 5700 papers, using their titles and MeSH terms to distinguish shortages of medicines from other types of shortages (Figure 1). 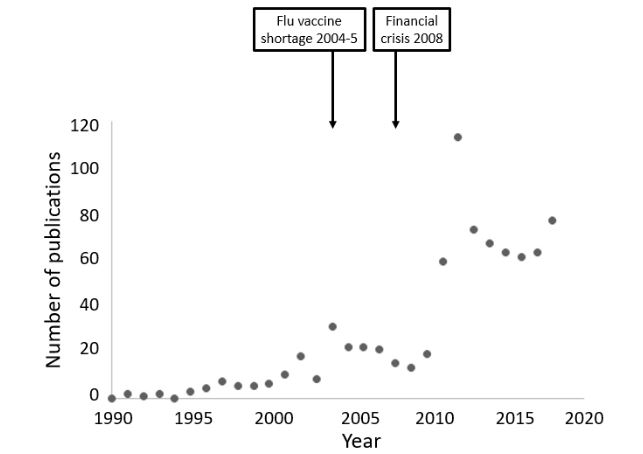 Figure 1. Numbers of publications since 1990 dealing with shortages of medications and containing the word “shortage/s” in their titles (source PubMed); “medications” includes pharmaceutical products, vaccines, and products for parenteral nutrition, but not blood products or radionuclides; this more extensive survey than that shown in last week’s column reveals a small extra peak during the flu vaccine shortage in 2004-5, as well as the large peak in 2012

The earliest papers, from 1914, documented shortages of naval surgeons, then shortages of catgut in 1916, industrial platinum in 1917, and helium in 1927. But most referred to staff shortages—doctors, nurses, domestic help, chemists—and in one case shortages of subjects for anatomical dissection. Shortages of dietary calcium and hospital beds also featured.

Ignoring the Dutch shortage of leeches in the early 19th century, the first example of a therapeutic shortage, of quinine and mepacrine, documented in a 1942 editorial in the Indian Medical Gazette, is linguistically connected to the cutting off of medicinal supplies. The IndoEuropean root [S]KER has different variants, the most prolific of which means to cut, scratch, dig, or separate. The most basic English derivatives come from Teutonic words. Shear means to cut, shears are scissors, and a ploughshare cuts the earth. Other cutting words include scrabble, scrap, scrape, scrub and shrub, sharp, and shred. A cricket score was originally a notch that you cut into a piece of wood to keep tally. Staves on a sheet of music were originally connected by lines or “scores” to show their connectedness; hence a musical score. A scar results from a cut in the skin and when you scarify your lawn you make scores in the surface. A scar or scaur is an indentation in a hill and therefore a cliff, and a scarp is an embankment. A scabbard is a sword protector. To skirmish is to fight with a sword. A screen cuts things off from each other.

Reduce [S]KER to KER and you get a wide range of Greek and Latin words, like cortex in Latin, the bark of a tree, which can easily be cut off. At one time it was used to refer to any bark used medicinally. Peruvian bark, or Cortex Peruvianus as William Salmon called it, was the bark of species of Cinchona tree used as a febrifuge, also called Jesuits’ bark because they brought it back from the New World. Later the quinine it contains was used instead. At least before the supply was cut off in India in 1942. A glut of Cinchona trees led to failure of small plantations and a shortage then resulted.

The overall increase in the numbers of publications describing shortages in the last 10 years (Figure 1) may have been, at least in part, triggered by the financial crisis of 2007–8, after which several generics companies went to the wall. Increasing use of the “just in time” inventory system, in which companies order raw ingredients only in amounts sufficient to meet expected demand, which must therefore be accurately gauged, may also have contributed. However, individual shortages have had widely differing causes, many of which would have been unpredictable at the time, and the solutions to which have been widely diverse.

Finally, amid all the dismal news about shortages, here’s a 1945 poem to cheer you up: 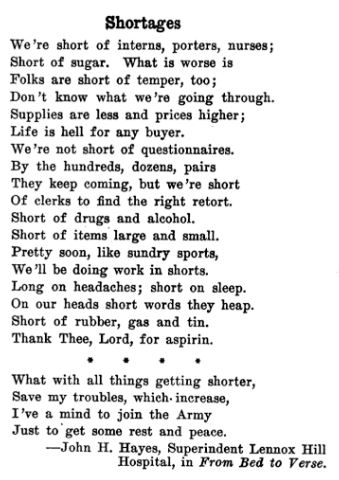