As I discussed two weeks ago, Paracelsus’s well-known statement, first published in his Sieben Defensiones in 1564, that “only the dose determines that a thing is not a poison” suggested, when taken with other parts of his text, some familiarity with the concept of dose-responsiveness, a concept that permeates modern drug development and use.

Three hundred years later, on 15 March 1864, the Norwegian chemist Peter Waage (1833–1900) and his brother-in-law, the mathematician and chemist Cato Maximilian Guldberg (1836–1902) (Figure 1) published a paper in which they propounded what eventually came to be known as the Law of Mass Action. 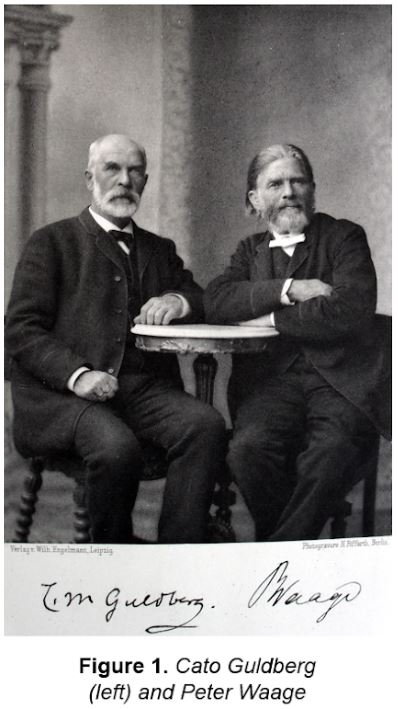 Guldberg and Waage’s 1864 paper, written in Norwegian, was largely ignored, and they published it again in French in 1867, as Etudes sur les affinités chimiques. Even then, however, the idea had to be rediscovered in 1877 by the Dutch chemist Jacobus van ‘t Hoff (1852–1911; Figure 2), who classified chemical reactions and defined their orders. To focus attention on their work, and to establish priority, Guldberg & Waage then published a more complete version in German, as “Untersuchungen über die chemischen Affinitäten” (1879).

The upshot of their analyses was the conclusion that the velocity of a reversible chemical reaction at equilibrium is proportional to the concentrations of the substances undergoing the reaction. If there is a series of intermediate reactions whose form is not known, it may not be possible to calculate the rate of each reaction, even when the overall reaction is known. However, the law governing such reactions at equilibrium does not depend on any intermediate steps, only on the concentrations of the initial reactants and the final products. 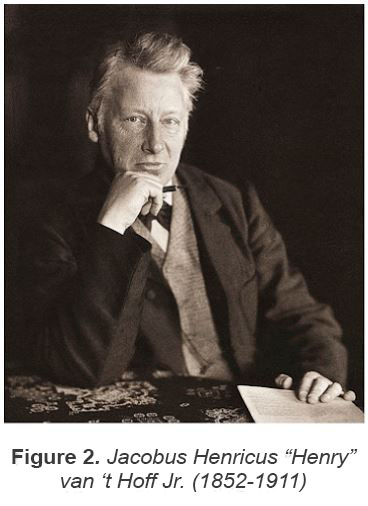 However, soon after the publication of their German paper, the term “Law of Mass Action” started to appear. In 1879, for example, Matthew Moncrieff Pattison Muir published an annotation of Guldberg and Waage’s 1867 paper, which had been donated to the library of the Chemical Society [of London] in its year of publication, in which he described its contents in detail. “The law of mass action formulated [by Guldberg & Waage],” he wrote, “was applied in the authors’ ‘Études’ to the cases of chemical action already cited and also to the case of ether formation” (J Chem Soc Abstr 1879; 36: 580-6).

From all this it may appear that “Law of Mass Action” is a misnomer, since the law deals with concentrations, not masses. However, that is not the case. In the first part of their paper, headed “Théorie des affinités”, Guldberg and Waage wrote “Les quantités d’un corps qui se trouvent dans lcc du volume total se nomment la masse active du corps” (§4) and “Si tous les corps forment une solution homogène, la masse active d’un corps se trouve en divisant la quantité absolue du corps par le volume total de la dissolution” (§7). In other words “active mass” is the term they used to describe the effective concentration of a solution. This term, no longer used, was meant to refer to the concentration of a substance that was involved in a chemical reaction, on the assumption that that might be less than the total concentration of substance present in the solution, not all of which might be available to react. It was first recorded in English in the same paper by Muir referred to above: “Active mass of a substance is defined as the amount of that substance in the unit-volume of the chemical system within which the chemical change proceeds.”

So the word “mass” in the Law of Mass Action is shorthand for “active mass”.