Paracelsus was a Swiss physician, alchemist, and astrologer, born Philippus Aureolus Theophrastus Bombastus von Hohenheim in about 1493. He died in 1541, and his Sieben Defensiones, written in 1538, were published posthumously in Cologne in 1564 in Swiss-German, and translated into Latin, as Septem Defensiones, in 1566. In the third defence (Die dritte Defension wegen des Schreibens der neuen Rezepte), Paracelsus wrote his now much quoted text: “Was ist das nit gifft ist? alle ding sind gift und nichts ohn gifft. Allein die dosis macht das ein ding kein gifft ist.” In English: “What is there that is not a poison? Every thing [sic] is a poison and nothing is not a poison. Only the dose determines that a thing is not a poison.” A Latin translation appeared in the margin of the 1564 edition (below). 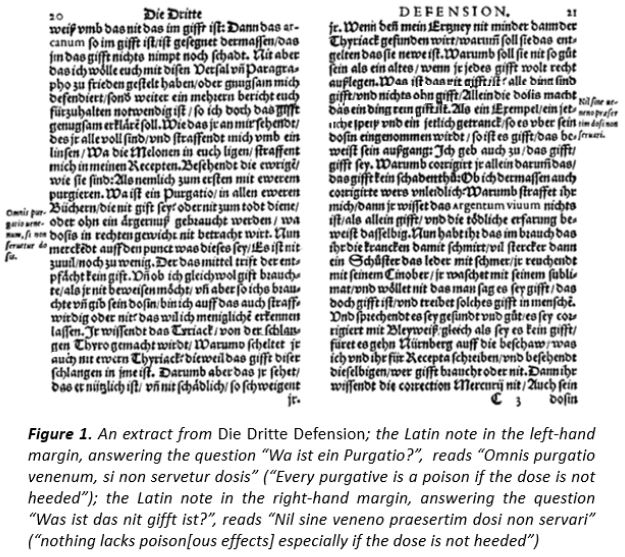 The words “alle ding” (“every thing”) are ambiguous. Instead of the traditional medical philosophy, based on the four humours, the four elements, and Aristotle’s four qualities, Paracelsus proposed a tripartite system, reflecting the Trinity and threefold human nature, consisting of soul, spirit, and body. The three educational pillars on which he thought his system should be built were astronomy, natural philosophy, and alchemy, reflecting the heavens, the earth, and human biology. Seeking a name for the elements of his new philosophy, and wanting to avoid the word “elements” itself, he rejected words such as the Latin terms corpora (bodies), essentiae (essentials or essences), and species (classes), and the German words ersten (first things), and stücke (pieces), and finally settled on “dingen”, literally just “things”.

At a time when most medicines were herbal, Paracelsus’s tripartite scheme involved the use of mercury, sulphur, and salt as therapeutic principles, or arcana (secret remedies), which he called “drei dingen” (“three things”) and which he considered to be the prime sources of all the matter in the universe, the causes of diseases, and at the same time possible cures. By “salt” he meant what we would nowadays call metallic salts, such as those of antimony, arsenic, copper, iron, lead, magnesium, mercury, and potassium, particularly potassium nitrate (sal nitri, nitre, or saltpetre).

Paracelsus wrote The Third Defence in response to herbalists’ criticisms of his treatment of syphilis. Read in isolation, as it is usually quoted, “alle ding sind gifft”, cannot be clearly interpreted: he might have been specifically referring to his therapies, the drei dingen. However, elsewhere in The Third Defence he stated that all therapeutic substances are indeed potential poisons. His reply to those who criticized him for using poisons in his therapeutic practice takes the line that there are poisons in nature, but that God put them there, and when used properly they do not have to be poisonous. “Why should a poison be denounced?” he writes. “He who denounces a poison does not understand its composition.” Take purgatives, for example. “Wa[s] ist ein Purgatio?” he asks, and the answer, in the marginal Latin translation, is “Omnis purgatio venenum, si non servetur dosis”; “Every purgative is a poison if the dose is not heeded” (Figure 1). Theriac, he points out, used as an antidote to poison, was itself obtained from the venom of poisonous vipers. Even food and drink is poisonous, he suggests, if taken in too great quantities. Then he adds, “The main point is that the dose should not be too large or too small. He who uses a middling dose will not cause poisoning.”

It would be surprising if Paracelsus had not recognized that too little of anything, or at least any thing, would be ineffective. His view that the same things could both cause and cure diseases was not Hahnemann’s homoeopathic view that “similia similibus curantur”. Paracelsus appreciated that a dose might be too small to be effective and that too large a dose would be poisonous. It therefore seems likely that he would have thought it logical that there must be a dose in between that would be both effective and not poisonous. This description may even have been seen as according with his more general tripartite theory. Perhaps he fully understood the complete nature of the graded dose–response curve, but we cannot be sure from the evidence of his text.

It took a further 300 years before the proper nature of dose-responsiveness started to become fully appreciated.