On 18 March 2019 the Speaker of the House of Commons, John Bercow, invoked a principle, dating back to 1604 and last used in 1920, that dictates that MPs may not vote on an identical matter twice in the same parliamentary session. Here’s what he said: “There has been much speculation over the past week about the possibility of the Government bringing before the House a motion on Brexit for another so-called meaningful vote under the statutory framework provided in the European Union (Withdrawal) Act 2018.” Following my suggestion that “meaningful” is frequently meaningless, I applaud his use of “so-called”.

Citing Erskine May, the guide to parliamentary procedure, he ruled that “a motion or an amendment which is the same, in substance, as a question which has been decided during a session may not be brought forward again during that same session . . . If the Government wish to bring forward a new proposition that is neither the same nor substantially the same as that disposed of by the House on 12 March, that would be entirely in order. What the Government cannot legitimately do is to resubmit to the House the same proposition, or substantially the same proposition, as that of last week, which was rejected by 149 votes.”

Then, on 25 July 2019, appearing at the Dispatch Box for the first time as Leader of the House, Jacob Rees-Mogg addressed the House: “My right honourable Friend the Prime Minister has said he views Prorogation as an archaic mechanism and does not wish to see archaic mechanisms used. As I am now bound by collective responsibility, that is now also my view.” The laughter that greeted his statement indicated that Members fully understood what he was referring to. As did the Speaker, who then commented: “There are of course Greek antecedents of the word ‘archaic’—a concept and fact with which the Leader himself will be closely familiar. However, I think I can say without fear of contradiction and for the avoidance of doubt, that the word ‘archaic,’ as spelt now, originated in the nineteenth century and in France. So, by the standards of the Leader of the House it is distressingly modern, and it is also—and I simply say this as a matter of fact—of foreign origin.”

“Archaic” is defined in the Oxford English Dictionary as “Belonging to an earlier period, no longer in common use, though still retained either by individuals, or generally, for special purposes”. Which describes the 1604 statute perfectly. In Greek ἀρχαϊκός, an adjective from the root ἀρχ-, origin or beginning, meant old-fashioned. Surprisingly, the earliest instances of “archaic” the dictionary lists date from the 1830s, and it appears to have entered English via the French “archaïque”, as the Speaker implied. However, contrary to his suggestion, the English spelling is as close to the classical Greek as it is to 19th century French.

The Greek root ἀρχ- gave many derivatives, running to seven columns in Liddell & Scott’s Greek–English Lexicon, including the noun ἀρχή, origin or beginning, the verb ἄρχειν, to begin, and ἀρχός a chief or leader.

Many words in English begin with arch-, denoting either leadership or beginnings. Among the former is architect, a chief builder (τέκτων), although the arch that he designs comes from a different root altogether, arcus, Latin for a bow. Archdukes, archangels, and archbishops are all leaders in their fields. The Greeks called the Aegean sea the Archipelago, literally the chief sea, and the meaning was then transferred to the many islands found there. Although “arch-” in its leadership sense often comes at the beginning of the word, as you would expect, it can also come at the end, as in monarch, oligarch, matriarch and patriarch, anarch, ecclesiarch, and hierarchy. Words that reflect the idea of a beginning also begin with “arch-” and include archetype, archaeology, archaeopteryx, and of course archaic. Medical forms include archiblast, archicortex, and archicerebellum. Hydrarch, mesarch, and xerarch end in -arch meaning beginning; they are plants that originate in wet, middling, or dry conditions.

A rare derivative, archeus, can be found in the works of Paracelsus and later philosophers (Figure 1). Paracelsus is perhaps most famous for having propounded the principle of dose-responsiveness in 1564. But, as the Speaker was keen to remind Mr Rees-Mogg, archaism does not preclude modern relevance. Paracelsus’s archaic principle, about which more next week, is as important today as it ever was. 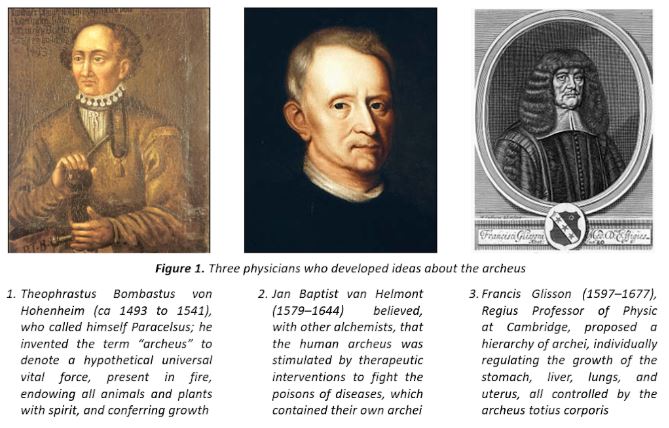