The RCP’s first reaction to the publication of Advancing our health—prevention in the 2020s is disappointment, both its content and the nature of its publication. Making sure people stay physically and mentally well is too important to be quietly released on a Monday evening, hours before the announcement of our new prime minister.

The green paper can at best be described as a Curate’s egg, good in parts. The Curate was, though, trying to be polite. The green paper correctly identifies many of the issues and talks about new technologies to tackle these. However, in effect it continues to deny the main problem—an urgent need to reduce health inequalities.

Unfortunately, it is nothing new. In 1977 one of my predecessors as RCP president, Sir Douglas Black, was asked by the Department of Health and Social Security to chair an expert committee into health inequality. Sir Douglas found that although overall health had improved since the introduction of the welfare state, there were widespread health inequalities due to economic inequality.

That government didn’t issue the report until 1980. When they did, they printed fewer than 300 copies and published it on a bank holiday Monday.

The reason why was made clear by the secretary of state, Patrick Jenkin, in his foreword to the report. He said that while the proposed expenditure may have been the right solution to the problems identified, the short term cost was simply unacceptable.

In 1987 the Health Education Council produced The Health Divide, to update the evidence and assess progress against the Black Report’s recommendations. The chair of the HEC cancelled the press launch hours before it was scheduled to happen, but the panel reconvened at the Disability Alliance and held it anyway.

In 1998 the, government commissioned, Acheson report found that, despite an overall downward trend in mortality from 1970–1990, the lower social classes experienced a more rapid decline, and that poverty affected children more than adults. It recommended increasing benefits for “women of childbearing age, expectant mothers, young children and older people”.

In 2008 the government asked Sir Michael Marmot to chair an independent review Fair Society, Healthy Lives. It said that health inequalities will only be reduced if everyone has good and fair employment, the places we live and work in are healthy and sustainable, and more resources are invested in prevention.

Despite all this work, significant and growing health inequalities persist. In Health Profile for England: 2018, Public Health England said there was no evidence that inequalities in life expectancy had narrowed: they had remained the same for males, and widened for females.

But the starkest finding was that the gap in healthy life expectancy between the richest and poorest areas of England was around 19 years.

As doctors we are committed to the belief that—as the health secretary’s November 2018 vision said—prevention is better than cure. And we are reminded of it each day as we manage wards and clinics that are bursting at the seams with people, many of whose ill health could have been prevented.

Coupled with our commitment to evidence, we can’t avoid the message of the data and reports of the past 40 years: socioeconomic imbalance produces inequalities in health, and the way to reduce those inequalities is to redress that imbalance. It also makes no economic sense to keep avoiding the issue: if the government had made the investment in 1980, perhaps these inequalities wouldn’t be costing the NHS billions today.

The green paper is, of course, just that—a starter for 10. We must use the opportunity to fill in the gaps and ensure that the message is loud and clear. At the RCP we have an advisory group on reducing inequalities in health and wellbeing that we established last year. Together with others, such as the Health Foundation and the Institute of Health Equity, we will aim to turn this whimper into a bang. 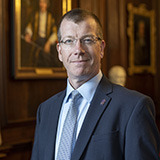 Andrew Goddard, President of the Royal College of Physicians