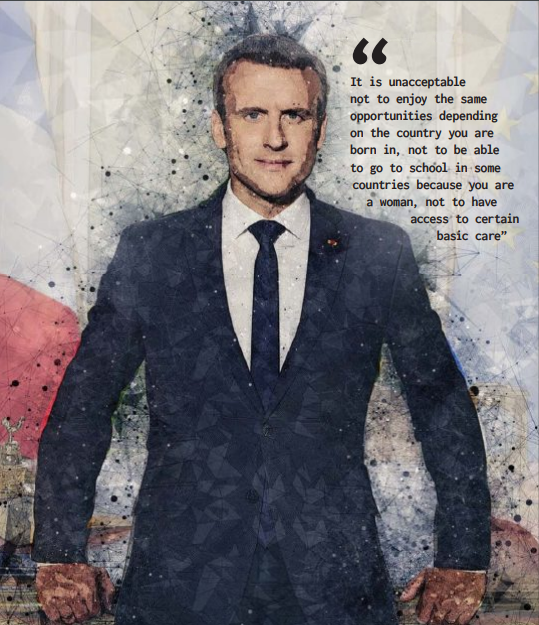 Ten years ago, when the financial crisis broke out, we took emergency measures but we did not solve the deepest problem, we did not curb the trend towards the hyper-concentration of wealth on our planet and we did not really provide an answer to all those who were left behind by globalisation. All those who were marginalised and frustrated by the humiliations they had suffered harboured a despair whose price we are collectively paying today.

We owe all these fellow citizens an answer. We owe an answer, my friends, to the 265 million children, more than half of whom live in sub-Saharan Africa, who have no access to schooling; to the girls who enjoy fair access to education in less than 40% of all countries. We owe an answer to the 700 million children who live in the regions most exposed to the effects of climate change, who are the victims of floods, drought, rising waters, diminishing resources.

We owe an answer when it comes to the aspirations of the largest number of young people in history, our young people, i.e., nearly two billion people between 10 and 24 years old today, 90% of whom live in developing countries.

We owe an answer to all those who look to us because their fate depends on what we can or can’t do here together, in this Assembly. And those people who forget that we owe them all an answer are wrong because they’re preparing for crises tomorrow, the day after, because they’ll leave their successors, because we’ll leave our children in a much worse situation than the one we’re in right now.

But this is also why the fight against inequalities will be the priority of France’s G7 summit presidency in 2019. Indeed, after Canada – whose leadership I want to pay tribute to here – France will hold the next presidency of the G7, whose format I would like to thoroughly revise to involve more effectively several other powers, and work at new forms of coordination.

It’s at the United Nations first that I want to say this inequalities agenda will be central to the next G7. I am also pledging to you to report back on the results of the Biarritz G7… because the time when a club of rich countries could alone define the world’s inequalities is long gone, because the fate of every country belonging to it is inseparable from that of every member of this Assembly.

Yes, we must tackle present-day inequalities today because they’re at the root of the evil I was denouncing at the beginning of my speech. We must tackle inequalities of destiny. It’s a moral aberration as much as a reality which is untenable. It is unacceptable not to enjoy the same opportunities depending on the country you are born in, not to be able to go to school in some countries because you are a woman, not to have access to certain basic care.

We must also fight passionately against gender-linked inequalities. I have made gender parity in France the great cause of my five-year term, and I issue an appeal here to make this a great global cause with you. Women and girls are the first to be affected by poverty, conflict, the consequences of global warming; they are the first victims of sexist and sexual violence, which too often prevents them from moving around freely, working or choosing what happens to their bodies.

Our responsibility in the 21st century is to end these kinds of violence, from harassment on the street to femicide. It’s time our world stopped making women victims and at last gave them their rightful place – the one where they are leaders too! We must guarantee them access everywhere to education, health care, jobs, and to taking economic and political decisions, and fight every kind of violence they are subjected to.

So France will propose to governments wishing to move forward with us the creation of a coalition for adopting new laws for gender equality. Fifty percent of our development aid will be devoted to projects to reduce gender inequalities.

We must also relaunch efforts to fight health inequalities at international level. We are hosting the Replenishment Conference of the Global Fund to Fight AIDS, Tuberculosis and Malaria in Lyon in 2019. We will retake the initiative on the fight against fake drugs and step up our action to tackle major pandemics. I call on everyone here to mobilise.

Emmanuel Macron is the President of the French Republic.