“Classification” is defined in the Oxford English Dictionary as “a systematic distribution, allocation, or arrangement of things in a number of distinct classes, according to shared characteristics or perceived or deduced affinities.” To which one might add that the number of classes is usually less than the number of items being classified. If that were not so, each item would represent its own class, which would obviate the need for classification.

Classification simplifies systems. By grouping things together it shows that items that are in the same class can be treated in like manner. In a good classification, the features of a single member of the class can be taken to be universally applicable to other members.

The IndoEuropean root KEL or KELƏ meant to call and hence to summon or instruct. The Greek verb παρακαλεῖν, to call for help, gives us paraclete (Greek παρακλητος), originally a comforter or helper, as applied for example to Zeus, and later to the Holy Spirit. The Latin equivalent, calare, gave calendae, the calends, the day on which the new calendar month was proclaimed; calendarium was an account book or ledger. A council is a body that is called together, helping us to be conciliatory.

The metathetical variant KLE gives a Greek church, ἐκκλησία, a place where you are ecclesiastically called to prayer. The Latin verb clamare, to shout or declare, gives us claim, claimant, and clamour, acclaim, counterclaim, declaim, exclaim, proclaim, and reclaim.

A class (Latin classis) was originally one of five grades of Roman citizens, supposedly classified by Servius Tullius, the sixth King of Rome, by the amount of property they owned, making them eligible to be called up for particular forms of military service.

Over the last few weeks I have been discussing biomarkers, their uses, their advantages and disadvantages, and those few that predict adverse drug reactions. Now to classification. Robin Ferner and I have described three ways of classifying biomarkers: by the technique used in measuring the biomarker, by the pathophysiology of the problem, and by the mechanism of action of the therapeutic intervention to which the biomarker is relevant.

Given a particular measurement technique one might ask whether it could be used as a biomarker and consult the relevant specialist—for example, a bacteriologist when intending to monitor progress in an infectious disease. In that case the importance of understanding the pathology of the problem is clear. Until the relation between peptic ulceration and the presence of Helicobacter pylori in the stomach was discovered it was not known that markers of the presence of the bacteria might be of interest in monitoring responses to treatment.

The other two methods of classification are closely linked. They are based on a general method of classifying pathophysiological processes and drug actions that relies on describing them according to the levels at which they occur, from molecules to cells, to tissues, to organs, to the whole individual, and even to populations.

Take the example of asthma (Figure 1, below). Monitoring at the molecular level could involve studying genes associated with increased susceptibility, such as beta-adrenoceptor genes, interleukin genes, TNF-alfa genes, and toll-like receptor genes. At the cellular level serum IgE concentrations relate, for example, to the age of onset in children. At the tissue and organ levels, peak expiratory flow rate reflects bronchoconstriction and blood gases reflect how capable the lungs are of gas exchange. Finally, the frequency and intensity of symptoms such as wheeze and breathlessness can be used to follow a patient’s long-term progress. 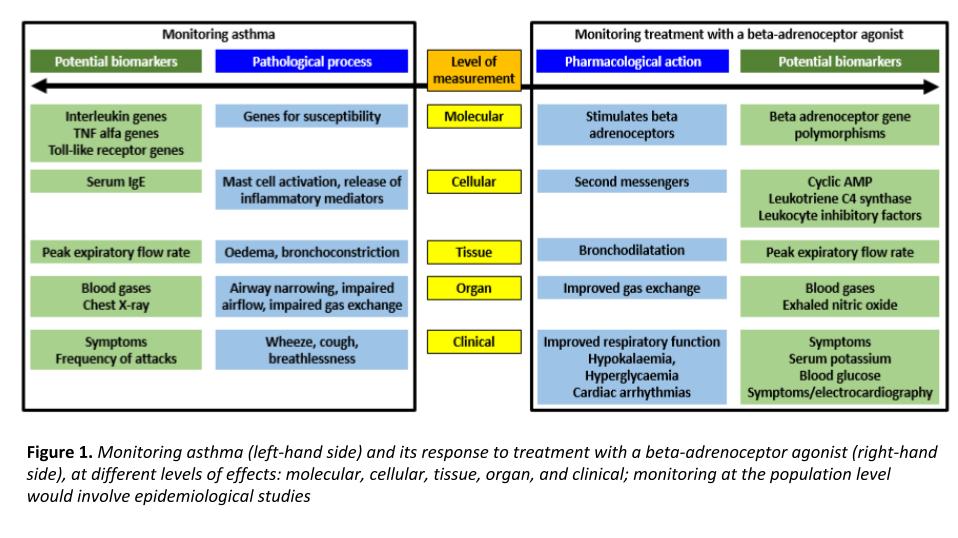 Comparable biomarkers can be used to monitor the response to treatment with, for example, a beta-adrenoceptor agonist, short-acting or long-acting.

One would expect that the nearer the final clinical outcome to the biomarker, the better. However, things may not always be that simple. Consider for example, the results of a study of two drugs used to treat asthma. Although patients with asthma feel breathless if they have a low peak expiratory ﬂow rate (PEFR), patients taking beclomethasone did not feel as breathless as those taking theophylline for a given PEFR. So what should the biomarker be? The objective measurement, peak ﬂow, or the patient’s subjective sensation?

And how often should we measure more than one biomarker in clinical trials?