Last week I discussed the idea of a minimal clinically important difference, introduced in the 1980s. It was later suggested that the term “clinically” should be omitted, implying as it did the doctor’s sphere rather than the patient’s personal experience. Was that justified?

The IndoEuropean root KLEI meant to lean or slant. In Latin clinare, to lean, gave us decline, incline, and recline. A clinometer is used to measure slopes. An aclinic line on the surface of the earth is one marking places where a magnetic needle does not dip. If you are matroclinous you resemble your mother more than your father and if patroclinous vice versa.

Clivus in Latin meant a slope, from which we derive acclivity, an up slope, declivity, a down slope, and proclivity, an inclination towards something.

The Greek word for the clitoris, κλειτορίς, may have originally meant a little slope. But it is more probably connected with a different root, KLEU, which gave the Greek verb κλείειν, to close or confine, and the noun κλείς, a key. The latter was originally κλᾱϝῑς, the extra letter in the middle being the obsolete letter, or episemon, digamma, a semi-vowel pronounced like a w. The Latin equivalent of κλείς is clavis. Two musical instruments, the ophicleide, from κλείς and its resemblance to a serpent (ὄϕις), and the clavichord, from clavis, both have keys.

The Latin word cliens originally designated one who was under the protection or patronage of another, i.e. one who leant on him, hence a retainer or follower, a votary of a god, a vassal state, and later one who used the services of a legal adviser, a client.

Add an m to KLEI and you get the Greek word κλίμα, Latin clima, an inclination or slope of the ground at a particular latitude or in a particular region. It therefore came to mean, as Liddell & Scott’s Greek-English Lexicon puts it, one of seven latitudinal strips in the οἰκουμένη (the known world) on which the longest day ranged from 13 to 16 hours in half-hour intervals, a system credited to Ptolemy in his book Geographia. Each of those zones, associated with a particular latitude, therefore came to be known as a climate. Each was associated with one of the seven known planets, celestial objects that could be seen with the naked eye, and each climate was named after the location through which it passed (Table 1 and Figure 1). And since the weather conditions varied with latitude, “climate” came to be used to refer to the weather in the seven zones. 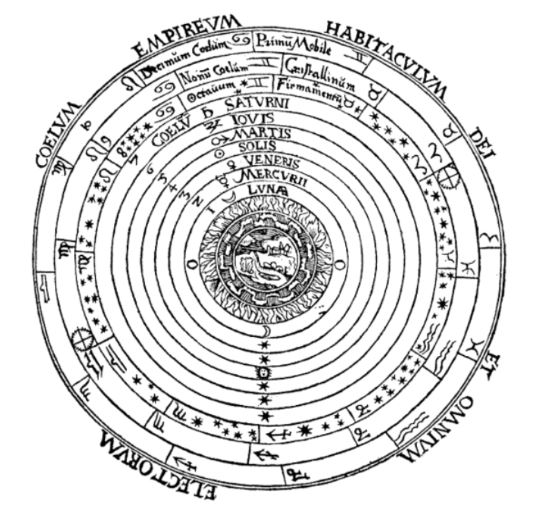 Now further extend the root with an x and you get the Greek word κλῖμαξ, a sloping ladder or a staircase, giving us climax; κλιμακτήρ was a rung on a ladder and hence any turning point in one’s life, eventually applied specifically to the menopause, the climacteric.

Add an n to KLEI and you get the Greek word κλίνη, a bed, something on which you lie. In Roman times a triclinium was a couch that ran round three sides of a table.

The English noun clinic originally (17th century) meant one who is confined to bed by sickness or infirmity. It then came to mean one who defers baptism until on his deathbed. When Voltaire was dying he was exhorted to renounce the devil; this was no time, he said, to be making new enemies. Then “clinic” became an adjective, meaning bed-ridden or relating to the sick-bed, replaced in the 18th century by the adjective “clinical”, which particularly referred to instruction at the bedside. The earliest instance cited in the OED is from 1780: “Dr John Parsons was unanimously elected Clinical Professor to the Radcliffe Infirmary at Oxford.” Parsons had been elected in 1772. It was not until the early 20th century that “clinical” came to mean detached and dispassionate, like a medical report or examination; diagnostic or therapeutic, like medical investigation or treatment; and treating any subject matter as if it were a case of disease.

So “clinical” implies the bedside, and dropping” clinically” from minimal clinically important difference, stressing the patient’s experience rather than the doctor’s, was strictly speaking justified. However, doing so might lead you to forget that the difference so described was in any way medical.