I suggested last week that “meaningful” more often means “meaningless” than any of the other possible meanings that it has acquired. As for the so-called “meaningful votes” in the House of Commons, is one to believe that all previous votes have been meaningless?

1 a. Full of meaning or expression, significant; communicating something that is not explicitly or directly expressed.
1 b. Having a serious, important, or recognizable quality or purpose.
2. Of a word, sound, etc.: conveying meaning; (Logic and Philosophy) compatible with the rules of a logical language or other sign system; able to function as a term in such a system.
3. Of data or its presentation: accurate and realistic; of practical use.

Those who coined the term “meaningful vote” seem to have had meaning 1a in mind.

Modern dictionaries are descriptive—their definitions reflect what those who use the words intend them to mean or think they mean. For example, “fulsome” originally (13thC) meant “characterized by abundance, possessing or affording copious supply”. Then it came to mean overgrown and rank, rather than simply abundant (17thC). Now, according to the OED, it is “chiefly used in reference to gross or excessive flattery, over-demonstrative affection, or the like”. And if enough people think that’s what it means, and use it often enough, then that’s what it means. Fortunately, no-one has yet invented the word “meaningfulsome”.

Collins English Dictionary gives a range of synonyms for “meaningful”: 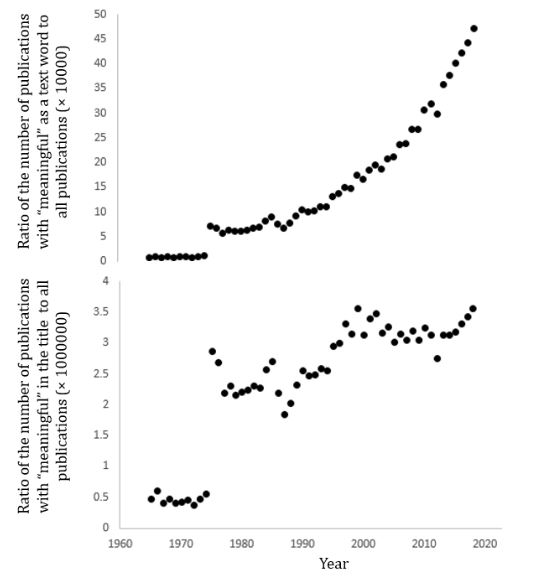 Occasionally, “meaningful” is criticized. An excellent example is to be found in a 1971 issue of the journal Science, highlighting a requirement of the US Food and Drug Administration (FDA) that the effectiveness of a medicinal product should be demonstrated to be “clinically meaningful”. In Table 1 I have summarized the authors’ cogent arguments against this usage. They ended their analysis thus: “We hope the scientific community will become aware of the FDA’s use of the phrase ‘clinically meaningful’ and respond in a positive fashion to this imminent regulatory development.” The FDA has continued to use the term “clinically meaningful” (currently over 1400 hits on their website). Freund & Preston have been cited relevantly only once. And if the data in Figure 1 are anything to go by, their exhortation seems to have fallen on generally deaf ears.

Table 1. A summary of comments by Freund & Preston on the FDA’s 1971 requirement for evidence of “clinically meaningful” effectiveness

With due deference to the several dictionaries that I have consulted, I suggest that there is another meaning of “meaningful”, one that I haven’t found in any of them, but which should, I think, be included: “Meaningless, used unintentionally in this sense by those who do not understand the meaning of ‘meaning’”.