“I’ve been a professor in a university hospital for more than ten years, leading one of the largest departments in the university’s children’s hospital. I never get any feedback.” At the opening plenary of the 2018 BMJ/IHI International Forum on Quality and Safety in Healthcare in Amsterdam, Wim Helbing made this statement to stress how special it was that a junior doctor had spoken up to him about their unpleasant phone conversation during the previous night shift. The audience laughed and clapped, but also recognized the disturbing truth just put forth.

Hierarchy is just one of many barriers that prevent us from giving feedback to colleagues. During my wife’s labor, for example, I was in doubt about whether the hospital personnel abided to the proper hygiene rules, but refrained from voicing my doubt. Despite my knowledge of the risks of puerperal fever, I did not want to jeopardize my relationship with the people we were so dependant on at that time. Voicing one’s concerns, even humbly and politely, can be misinterpreted as criticism. And criticism of a situation, is all too easily interpreted as personal criticism.

At the international roundtable BMJ hosted in Riyadh in April 2018, I was privileged to discuss current and coming patient safety issues with healthcare improvement leaders from around the world. Despite the differences in our healthcare systems, we all recognized the importance of an open culture and collaboration for patient safety improvement. But how can we be open and truly collaborative if we feel uncomfortable in speaking up to each other?

One way to tackle this problem is to flip perspectives: instead of questioning how the other might react to your comment, ask yourself how you would want to be addressed in his or her place. Would you want the other to think badly of you and walk away, or would you want a chance to undo a misunderstanding, explain yourself or correct yourself before harm happens? Would you seize the opportunity to learn, or would you feel threatened when a colleague confronts you with your fallibility?

The American psychologist Carol Dweck found that humans approach a challenge with either a fixed or a growth mindset. In short: in a fixed mindset you believe your talents and abilities are fixed, you are who you are. In a growth mindset you believe there is always room for improvement. In a fixed mindset, feedback about suboptimal professional performance is threatening as it confronts you with your shortcomings. In a growth mindset it’s a gift, as it helps you to further develop. Professor Jill Klein of the University of Melbourne wrote that many clinical settings are characterized by factors that promote a fixed mindset, like competitiveness and a focus on talent rather than shared learning. She describes how adopting a growth mindset in clinical teams may positively influence the team dynamics, for example, how errors are disclosed, discussed, and learned from. Discussing concerns about circumstances or each others performance is then decoupled from blame and ego’s, but seen as a normal way to continuously enhance the quality and safety of patient care.

Both Professor Helbing, and the then junior doctor, Anne de Pagter, showed a growth mindset in the way they handled the aftermath of their unpleasant phone call. Anne de Pagter did not assume that “he is who he is”, but stepped up to confront the professor with the effects of his behavior. She felt she had to speak up, because not doing so could negatively impact her patient care. Partly due to the way she spoke up, Professor Helbing could accept the feedback as valid and used it to improve his interaction with colleagues. Both doctors experienced personal growth. I was moved by their story, as were many others at the forum.

We are all fallible, and none of us perform at our peak all the time. We can all use some feedback on a regular basis, especially from those that feel hesitant to express themselves to us as they often see things we are blind to. Confusing feedback with criticism stagnates the development of individual and team performances, and negatively impacts patient care.

Just imagine how much we could improve both the safety for our patients and our joy in work if we adopted a growth mindset. 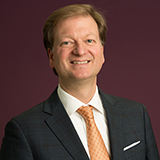 Ian Leistikow inspector at the Dutch Health and Youth Care Inspectorate and professor at Erasmus School of Health Policy & Management in Rotterdam. He is author of the book “Prevention is better than cure. Learning from adverse events in healthcare.”