In 2012 Leonard Kish’s headline grabbing claim that “Patient engagement is the blockbuster drug of the century” was hailed for its insight. It galvanised ongoing debates on the potential of empowering patients and working jointly with them in research, policy making, and practice. As publications on “PPI,”—patient and public involvement, the front running acronym—have soared and new journals are set up to house them discussion is hot on the ethical and moral challenges of PPI, what good practice looks like, and what difference it makes. Evidence of the impact of PPI is a necessary prerequisite, pragmatists argue, to persuade health systems to invest in it.

The pharma industry’s landmark paper on the return of PPI appeared in 2017 in Therapeutic Innovation and Regulatory Science. This estimated that money spent on patient engagement activities could produce an over 500 fold return in investment via a reduction of protocol amendments and increased recruitment and retention to trials. Over recent years pharma companies have approached PPI in different ways and with varied enthusiasm. Within Europe many have joined a dedicated consortium to advance it and recent initiatives were discussed at a meeting in London last week. 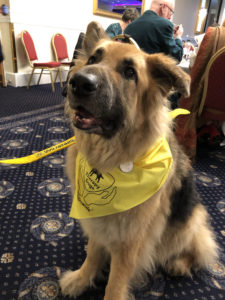 It was a lively affair. Participants from industry, academia, medical charities, and new research platforms, together with a strong contingent of patients, exuded passion for collaboration. Even the visiting “therapy dogs” seemed on side.

Former footballer and “leukaemia survivor” Geoff Thomas’s opening headline message was that patients can do more than raise money for research. He urged pharma, academic, and scientific communities to invest more of their resources in working with patients; and do more to tackle inequitable access to medicines.

Nicholas Brooke, executive director of The Synergist, a not-for-profit coalition, described how its Patient Focused Medicines Development programme promotes partnering with patients throughout the lifecycle of medicines. Its recent co-created best practice guidance builds on that developed by INVOLVE. Its appropriately named mapping tool, SYNaPsE, connects hundreds of initiatives, organisations, and experts working on PPI and relevant linked learning resources.

A discussion of whether patients should be “skilled-up” to work with researchers, or researchers taught the complex skills of forging effective partnerships with a diverse range of patients and carers, concluded that both were needed. Two patient graduates of the EUPATI Patient Expert training course, which has several hundred networked alumni, spoke about how it had empowered them to take on leadership roles in patient organisations.

Vanessa Pot, director of Patient Advocacy and Strategic Partnerships at Merck KGaA who heads a six person team, underlined a universal truth.”Effective patient engagement depends on getting buy in and support from senior management.” Her mission, she said, was to spread the concept and practice of PPI across the whole company. The “image of money making pharma companies bent on grooming patient puppets” had to be confronted. Trust is vital, she said, and there must be full transparency in all pharma’s interaction with patients.

“Lots has already changed” she asserted. “We now routinely involve patients in protocol design and the development of patient reported outcome measures. Through mapping patient journeys we have a much better understanding of patients needs, including information needs, and how to reduce the burden of participating in trials.”

All agreed that co-design of “patient centric, minimally disruptive” studies should become the norm. Patients are calling for it and a recent report from the Economist Intelligence Unit shows clear evidence of benefit; but also that such trials are still rare. New technologies make it perfectly possible to “take the trial to the patient” not vice versa; and several presentations described how drug administration and collection of biometric trial data at home, has resulted in markedly reduced drop-out rates.

Maintaining relationships beyond the end of a trial is important, speakers agreed. Too often exchange is terminated when trials end. Patients want to know where, when, and how their input into clinical (and pre-clinical studies) makes a difference. Most also want access to study results, and in a form they can understand. Paywalls frustrate all, and the promise of a new funder led initiative, Plan S, to “end the reign of paywalls was mentioned. Publication of lay summaries of research was advocated; but these are still uncommon and there is no consensus on who should write them and what literacy level to pitch them at.

In meetings where enthusiasts for PPI in healthcare gather to exchange ideas and aspirations it’s hard to avoid rhetoric. Phrases like “tokenism must be avoided ” and “it’s all about building relationships ” get bandied about a lot. A catchy one at this meeting was  “Partnership is better for health and better for business.” That said, this was a meeting where the divide between patients and other delegates was far less obvious than most meetings I attend and I left uplifted. It’s not hard to conclude that the NHS, and other health systems too, might have something to learn from the energy and innovative approaches to PPI being shown by some pharma companies.

Just a couple of cavils. Is a round of applause for “badge wearing” patient attendees a good idea?  Aren’t we all equal partners in this enterprise? And I’m not a fan of framing patients as “medical heroes,” a term which may equally be applied to carers of all sorts. Talking to people at the meeting it was evident that many straddled both camps—and that’s what drives their passion for PPI.