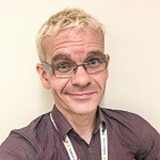 “LGBTQ folks—what’s one activity you dread that straight people don’t stress about? Mine’s going to the doctor. I just always feel judged” —@MarkPochow

That’s not an unusual feeling among LGBT+ (lesbian, gay, bisexual, transgender) people—a recent Stonewall UK study reported that one in seven LGBT+ people have avoided seeking NHS care because they were concerned that they would experience discrimination.

Despite a quarter-century of major social and legal advances in the UK, LGBT+ people can still face significant challenges, particularly with respect to healthcare. Almost a quarter have witnessed NHS staff making negative remarks about LGBT+ people. One in eight report experiencing unequal treatment because of their sexuality or gender identity, and a quarter feel that their healthcare provider does not have a good understanding of specific health needs of LGBT+ people.

Over half of NHS staff don’t think sexual orientation is relevant to healthcare, and one in every fourteen members of NHS staff say they would feel “uncomfortable” working alongside a trans colleague. Many NHS staff feel they don’t have the knowledge or confidence to stand up for LGBT+ patients and colleagues who might need it.

LGBT+ people are far more likely to have mental health issues than the general population, with significantly higher rates of anxiety, depression, self-harm, and attempted suicide. For some groups, particularly trans people or LGBT+ people who are black or from ethnic minorities, those figures rise further.

“No feeling is worse than needing someone to talk to but having nobody that you can turn to.*”

For younger LGBT+ people, often still exploring their sense of self or identity, dealing with these issues can be even more difficult. They may feel uncertain, afraid to disclose their sexuality or gender identity—and feeling unable to do so often further increases their risk of physical or mental health problems. Many feel they don’t have an adult they can turn to or confide in, leaving them feeling isolated and vulnerable. If they feel uncertain of the response they may get if they come out to an NHS staff member, they are less likely to do so—even the perception that discrimination may happen can cause harm.

Conversely, NHS staff are often in a perfect position to be advocates and supporters for LGBT+ people when they most need it. 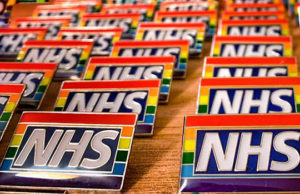 Launched in October 2018, funded by Guy’s and St Thomas’ Charity and working closely with the Royal College of Paediatrics and Child Health, the Evelina London Children’s Hospital Rainbow NHS Badge project is intended to be a small part of the solution to some of these challenges.

The badge is a simple image: an NHS logo superimposed on the rainbow pride flag, worn on NHS staff lanyards or uniforms. It’s intended to send a strong message: “you can talk to me”, without fear of judgment or discrimination, about sexuality or gender identity. The badges reinforce that our hospital is a place of inclusion, that LGBT+ children, young people, and families do not need to feel scared or alone here, sending a clear signal our staff will listen to them and help get any support they may need.

Staff wanting to be part of the project are provided with information explaining some of the barriers to healthcare that LGBT+ people face  and why we need to send a message of inclusion. They have to sign up, positively affirming that wearing a badge is a responsibility; that they will listen and make sure that an LGBT+ person is signposted to further help and support if they need it.

“My badge has started so many conversations already!”

The response at Evelina London has been overwhelmingly positive, with a third of our staff now wearing a badge.

The project will roll out across the rest of Guy’s and St Thomas’ NHS Foundation Trust in February 2019; soon after that we will give any NHS organisation or Trust who is interested in doing the same a toolkit to do so.

A badge will only ever be one small part of a much needed wider NHS commitment to help address challenges LGBT+ people still face with regards to both health and accessing healthcare, but the power of a simple symbol to send a clear message of acceptance, inclusivity and non-judgmental assistance is one we think should not be under-estimated.

“A simple gesture, a small sign – that means so much to people who really need it!”

You can keep up to date with the project by following the @RainbowNHSBadge Twitter account, or by emailing RainbowBadge@gstt.nhs.uk