A colleague recently showed me a recipe, dating from around the beginning of the 20th century, for a tooth powder. It appeared to contain, among other things, dragon’s tooth.

The earliest instance of “tooth powder” in the Oxford English Dictionary (OED) dates from 1542, whereas that for “toothpaste” dates from 1832. Each is also called a dentifrice (Latin dens a tooth, fricare to rub), defined in the OED as “A powder or other preparation for rubbing or cleansing the teeth; a tooth-powder or tooth-paste; also applied to liquid preparations.” Not knowing which meaning is usually attached to it by dentists, I searched PubMed for clues. When I paired “dentifrice” with “paste OR toothpaste” as text words I got 548 hits. Pairing it instead with “powder” OR “tooth powder” gave only 12 hits. I conclude that today “dentifrice” is typically used to mean “toothpaste” and rarely “tooth powder”. However, the earliest instance of “dentifrice” quoted in the dictionary is from 1558, and the word must therefore originally have been used to describe tooth powders.

So what was dragon’s tooth? Several draconian plants (Latin draco, a snake, diminutive dracunculus) include dragonwort, also called dragon’s claw or dragon’s herb, variously identified as Dracunculus vulgaris and Polygonum bistorta (also known as snakeweed); small dragonwort is Arum maculatum or wake-robin. Dragon’s-mouth is variously identified as Antirrhinum majus, Arum crinitum, and Epidendrum macrochilum. And dragon’s head is the name given to a genus of plants, Dracocephalon. But although I have searched for it in various dictionaries and books on medicinal plants, I have found no dragon’s tooth.

Looking for it in Latin, “dens draconis”, I found it listed as a remedy, Long Chi, used in traditional Chinese medicine as a tranquillizer and to relieve restlessness and convulsions, in conditions such as insomnia, palpitation, and epilepsy. However, I suspect that this may have been confused with Dendrobium draconis, a type of orchid (picture). 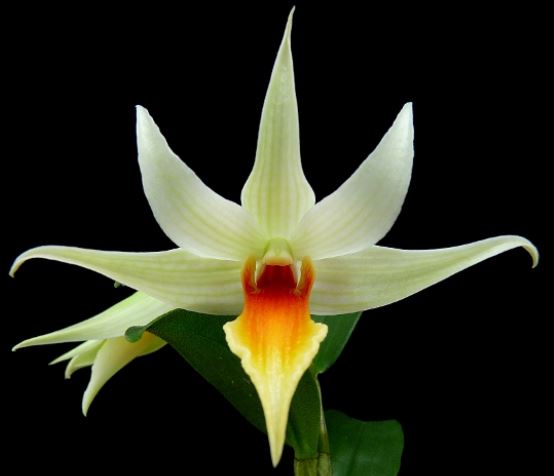 “Dragon’s teeth” are something else again. Cadmus, a Phoenician prince, looking for his sister Europa, who had been abducted by Zeus in the form of a white bull, sought inspiration from the Delphic oracle. The Pythia told him to give up his quest and instead to follow a heifer that he would meet; when the cow lay down exhausted he should build a city where it lay. When that happened, Cadmus decided to sacrifice the cow to Athena, and sent some of his companions to the nearby Ismenian spring for water to purify the ritual. But the spring was guarded by a dragon, sacred to Ares, which killed his men. Cadmus slew the dragon (picture) and, instructed by Athena, sowed its teeth in the ground. When fully armed men sprang up, Cadmus threw a precious stone in their midst, over which they fought. With the help of five survivors of the fray, Cadmus founded the city of Thebes. He is also reputed to have brought the alphabet from Phoenicia to Greece. Cone-shaped anti-tank obstacles used in the Second World War were also called dragon’s teeth. 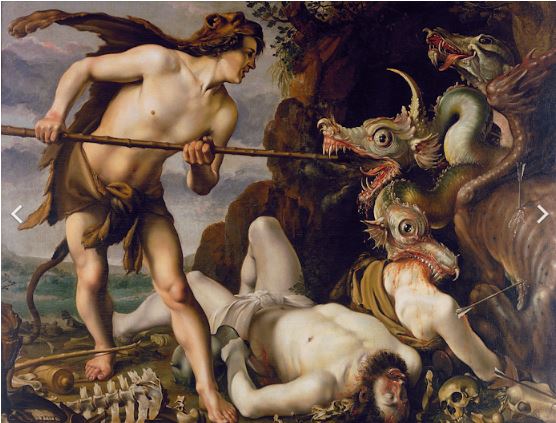 In early sources a “dragon’s tooth” may mean something with the potential to cause major problems, like the teeth sown by Cadmus; for example, “the dragon’s tooth of necessity” (1856) and “the dragon’s tooth of reprimand” (1889). However, its meaning is often unclear, as, for example, in The BMJ (1905), in a piece titled “Quacks In America”: “America has a body of physicians and surgeons who are a credit to the world, but … they are as a dragon’s tooth in the multitude to the ‘quacks’ who prey upon the people, and in so doing are in many cases protected by the law.” And in a piece about prohibition (1915): “The dragon’s-tooth question, ‘Why, if prohibition does not prohibit, do the liquor men oppose prohibition?’”

Finally, I found a recipe for a tooth powder (picture) containing dragon’s blood, a resin derived, according to Mrs Grieve, in A Modern Herbal (1931), from plants such as Calamus (or Daemonorops) Draco, whose ripe berries are covered with a reddish resin, used to colour varnishes, toothpastes, tinctures, and plasters, for dyeing horn to imitate tortoiseshell, as a cathartic, and to treat syphilis. Other forms of dragon’s blood have been prepared from resin exuding from the trunks of Dracaena species; δράκαινα is a Greek she-dragon. 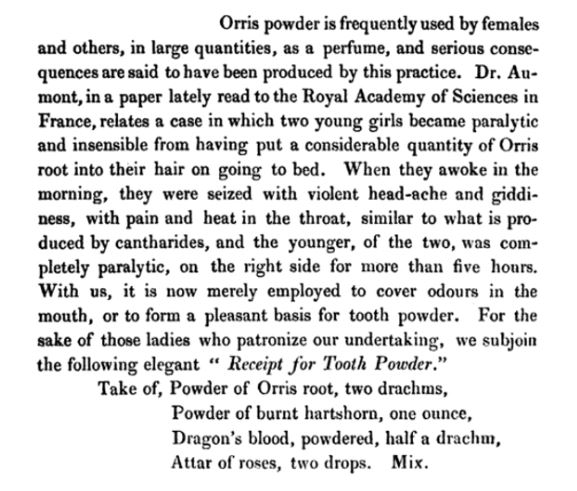 A recipe for tooth powder, found in the entry on orris root (Iris Florentina) in Medical Botany, Or, Illustrations and Descriptions of the Medicinal Plants of the London, Edinburgh, and Dublin Pharmacopoeias by John Stephenson and James Morss Churchill (London: John Churchill, 1831)

With this information, I took another look at the original recipe. The key word had been obscured by a large stain, and on closer inspection I realised that what I had read as “dragon’s tooth” was in fact “dragon’s blood”. But then, had I read it correctly in the first place, I wouldn’t have had such an interesting journey.

Acknowledgement: Thanks to Sebastian Bacon for having drawn my attention to the recipe for a tooth powder.