Sir Henry Cole is widely credited with “inventing” the first Christmas card in the UK in 1843. [1] His friend John Horsley was the illustrator and each card sold for one shilling in his first card run of approximately 1000 cards.

The first Christmas card was also controversial and unpopular with some people as the illustration depicted a scene showing people drinking, and included a young child being given a glass of wine (figure), but it heralded the beginning of an industry that in 2016 had grown to one billion cards sold in the UK alone annually.

175 years after Sir Henry Cole’s first card, the depiction of alcohol on greeting cards is commonplace, and while they may not depict children drinking, the messages they promote about drinking are still controversial. 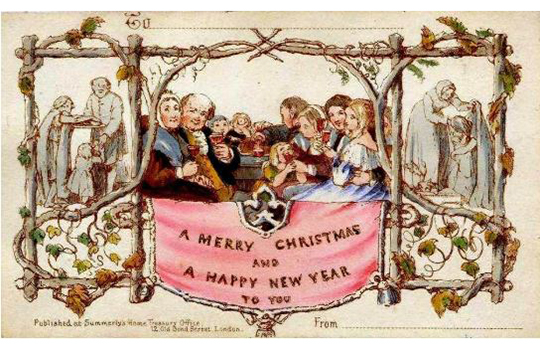 Alcohol is a common theme for greeting cards. Illustrations and texts portray alcohol as enjoyable and fun, and can range from a glass of champagne with the word “Cheers” to those that are more excessive and encourage binge drinking. Phrases such as “let’s get wrecked,” “all the gin,” and “trollied” are printed across illustrations of people clearly drunk, surrounded by empty bottles, drinking directly from a bottle, or in some case unconscious. These cards reflect and reinforce a social attitude that excess alcohol consumption is acceptable and associated with celebration. They influence views on drinking and reinforce this as a social norm.

When an analysis of studio greeting cards, containing alcohol related subject matter was undertaken, by Peter Finn in 1980, it “revealed themes that suggested getting drunk is a natural and desirable concomitant of celebrations, and that drunkenness is humorous, enjoyable, and harmless.” [3]

Nearly four decades later the greeting card industry remains buoyant with the UK buying more cards per person than any other nation, an average of 33 each a year. [2] It has also embraced new technology with online cards now accounting for 10% of cards sold. [4] The portrayal of alcohol on Christmas cards today is not dissimilar to those described by Finn, and show that while the card industry has changed and adopted online technology, and the risks of excess alcohol consumption are regularly communicated, it is still a popular theme used to sell cards.

The idea that excess drinking as shown on many greeting cards cards is normal, enjoyable, and to be encouraged is at variance with public health messages. In 2016 new guidance was issued which recommended “that it is best, if you do drink as much as 14 units per week, to spread this evenly over three days or more.” [5]

Over 10 million people across the UK are drinking at levels which increase their risk of health harms, and alcohol consumption is the leading risk factor for ill-health, early mortality and disability in those aged 15 to 49. [8] Using the narrow measure (where the main reason for admission to hospital was attributable to alcohol) there were 337 000 estimated admissions in 2016/17 and 5507 alcohol specific deaths in 2016. [7]

While alcohol related deaths and illness are increasing across the UK and Public Health England is running campaigns targeting excess alcohol consumption, these cards reflect that many people consider drinking to be harmless and fun.

In a large competitive market, cards which appeal to the sender may reflect social opinion. The acceptability of alcohol use and its association with celebrations such as birthdays and Christmas is evident in the cards available. The card industry responds to the market, producing cards that sell. New celebrations such as same-sex marriage cards are now available, and as the population ages there has been an increase in the number of 80, 90 and 100 year age cards sold. As the card market adapts and produces new themes it is worth considering whether it influences societal views or whether societal views influence the card market. The truth lies probably in the middle. Buying and sending a card that suggests, promotes, or encourages excessive alcohol consumption also sends the message that this is normal. As cards with alcohol themes become more prevalent then a cultural norm develops where drinking in association with celebration becomes the expected. It becomes a self-fulfilling prophesy. Manufacturers are unlikely to respond to public health lobbying to depict more responsible drinking, but may change what they produce if consumers choose not to buy cards depicting irresponsible drinking. Whether this leads to changes in alcohol consumption is, however, another question.

Acceptability (social norms) of alcohol is one of the three key influencers of alcohol consumption. [6] There is little evidence of effective interventions which impact on social norm, with marketing, labelling, and advertisements designed to reduce excess drinking being shown to have small, short term and inconsistent impacts.

Ultimately the responsibility for choosing cards lies with the purchaser so perhaps it is worth reflecting the next time that you choose one whether the message is one that you condone and wish to pass on.

Footnote: Who has the last laugh? One of Sir Henry Cole’s first Christmas cards, sent to his grandmother was recently sold at auction for £22,500. [1]

Provenance and peer review: Not commissioned; not externally peer reviewed