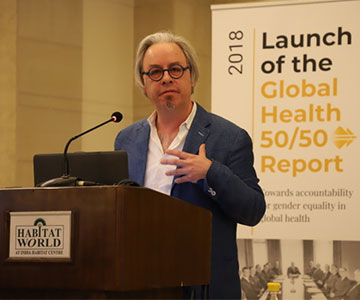 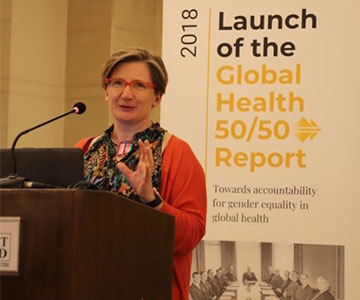 Former US President George HW Bush may have declared that ‘’this gender thing is history’’ but current political discourse suggests that discussion around the issue of gender is alive and kicking. [1]

Governments have signaled their intention to move away from the idea that gender is a lens through which we understand people’s opportunities to realise their own health and wellbeing. [1] We have seen a range of such interventions, from the withdrawal of funding for academic departments that study gender, to threats to replace the word “gender” with “woman” in United Nations human rights documents. [2] Through such moves, states have confirmed their disavowal of gender as a social construction that highlights how position, power, and interpersonal relationships affect the health outcomes of people throughout their lives. [3]

Against this ideological backdrop, there are signs that organisations working global health are moving in the opposite direction, embracing gender equality as a way to improve health outcomes.

The inaugural report of the Global Health 50/50 (GH5050) initiative, which seeks to advance action and accountability for gender equality in global health, reviewed the gender equality policies and practices of 140 global organisations with an influence or interest in health. [1] It revealed significant variation in the sample, with scope for improvement across the board. [2]

But GH5050 is more than an academic exercise. We contacted the leaders of those 140 organisations and asked them to make one public commitment to improve gender-equality in the coming year. This ‘’GH5050 Challenge’’ has triggered solid commitment from some 20 organizations to date. [1]

This week, to coincide with the Women Leaders in Global Health conference in London, GH5050 launched a report with a snapshot of the commitments and changes. [1]

These commitments cover the seven domains reviewed in the 2018 analysis – publicly committing to gender equality (eg Global Handwashing Partnership and Population Services International), clarifying how the organisation defines gender and gender equality (e.g. Partners in Health, Becton Dickinson), adopting policies to create gender-responsive programmes (e.g. Engender Health, IPPF), including disaggregating data by sex (e.g. UNICEF), as well as a range of measures to create gender equitable workplaces, including in relation to the parity of men and women in leadership positions (e.g. Population Council, Save the Children, GAIN).

Beyond the GH5050 Challenge many organisations have been in touch with GH5050 to discuss how they can improve their practice, including organisations not included in the initial sample. Moreover, a number of organisations have undertaken critical self-reflections based on the GH5050 framework and identified areas to practice greater gender-responsiveness, among them The Lancet, Drugs for Neglected Diseases initiative, Health Action International, Medicines for Malaria Venture, and the Medicines Patent Pool.

The leadership shown by some global health actors to up their game on gender should be celebrated. Organisations have taken steps to improve the working environment for women, including measures that will facilitate career progression and help to improve gender-equality and gender-parity in the workplace. This is certainly to be welcomed. Our report showed that men largely run the business of global health. Only a fifth of global health organisations had gender parity on their governing bodies or female board leaders. Fewer than a third had female executive directors.

Global health organisations must also embed a focus on gender lens in the work programmes. The gendered nature of roles, behaviours, activities, attributes, and opportunities that any society considers appropriate for women and men, girls and boys, and people with non-binary identities exerts a significant impact on the health outcomes of individuals. It also determines how institutions respond to the needs, health, and career of every individual. Such responses range from that are gender-unequal and perpetuate gender inequalities to those that are gender-blind or even gender transformative, addressing underlying inequalities and working to transform harmful gender roles, norms, and relations. [2]

The public commitments being made to improve practice suggest that the tide is turning towards greater recognition of the importance of both gender and the goal of gender-equality in global health. GH5050 welcomes this trend. The underlying logic of the GH5050 initiative is that rigorous research and transparency will generate incentives and accountability for better practice. Signs are indeed encouraging that together we can make this gender inequality thing history.

KB and SH have read and understood the BMJ conflict of interest policy and have nothing to declare.

The views presented in this Commentary may not represent those of UNAIDS.