Continuing my exploration, during Clinical Pharmacology Month, of the Medicines Act 1968, I turn to Part VI, “Promotion of Sales of Medicinal Products” (§§92–97); i.e. advertising.

The IndoEuropean root WER, to turn, wind, or twist, was highly versatile, you might say.

In Greek, ἐρείκη was the name for Erica arborea, giant heather, from whose twisted roots briar pipes are made. Dioscorides called St John’s wort ὑπέρεικον (ὑπέρ, over, + ἐρείκη); we call it Hypericum perforatum. St John’s wort is supposedly useful in the treatment of mild depression, but, more importantly, causes enzyme induction, which may reduce the efficacy of medications such as ciclosporin, irinotecan, ivabradine, oral contraceptives, and warfarin.

Several Old Germanic forms derived from WER have given us many words: warth, meaning [turning] towards, became a suffix in words such as inward, outward, forward, backward, and sideward; werthaz, to turn into or become, is seen in stalwart and worth; wurthi, to turn into, gives us weird, like the Weird Sisters, from Old English wyrd, fate; other forms meaning to turn give us warp and wrap, wrangle, wreath, wrench, wring, wrist, wrinkle, and writhe. Awry, wry, and wrong connote twisting. And from Old English wyrgan, to strangle, we get worry.

Latin words from WER include vertere, to turn, versāre, to turn repeatedly, and versārī, to move around a place or frequent it. These give us versatile, verse, version, versus, vertebra and vertebrate, vertex, vertigo, vortex, vorticism, and Tinea versicolor; adverse, anniversary, bouleversement, controversy, converse, diverse, malversation, quaquaversal, tergiversate, transverse, universe, and vice versa; animadvert, avert, convert, divert, diverticulum, and divertissement, evert, extravert, introvert, invert, obvert, pervert, revert, and subvert; dextrorse, extrorse, introrse, retrorse, and sinistrorse. From vergere, to turn or be inclined, come verge, converge, and diverge. Verber, a whip or sling, gives us reverberate. Verbēna, foliage used in religious rituals, gives us Verbena or vervain. And vermis, a worm, gives us vermicelli, vermicular, vermin, and the vermiform appendix.

Advertise and advertisement come from advertere, to turn towards (Latin, ad + vertere). The verb to advert means to take notice or pay attention to, but the word is now more commonly used as a short form of “advertisement”. All of these forms first appeared in English at the start of the 15th century, the earliest recorded instances being in 1425/6. However, “advertisement”, a public notice or announcement, especially one advertising goods or services, did not emerge until the end of the 17th century. Joseph Addison, in an edition of The Spectator published in 1712, referred to” men who frequent Coffee-houses”, who “read the Advertisements with the same Curiosity as the Articles of publick News”; Moll Flanders in Daniel Defoe’s novel (1722) tells us how she settled a disagreement, in which she was the injured party, by demanding a payment and to be allowed to publish “an advertisement of the particulars in the common News Papers.” She settled for £150, a suit of black silk, legal expenses, and “a good supper” as well.

The Medicines Act 1968 laid down rules about advertising medicinal products. It made it illegal to give false or misleading information and to advertise unauthorized (i.e. “off-label”) recommendations. Anyone found guilty of an offence was to be liable: (a) on summary conviction, to a fine not exceeding £400; (b) on conviction on indictment, to a fine [unspecified] or to imprisonment for a term not exceeding two years or to both. It also became illegal to send an advertisement to a practitioner unless it was accompanied by a data sheet, in which case the advertisement should be “not inconsistent with the particulars given in the data sheet”. In this section of the Act the term “data sheet” was also defined.

The Act also empowered the licensing authority to require copies of any advertisements and data sheets relating to medicinal products to be provided, and to ensure that they contained adequate information, did not include misleading information, and promoted safety.

How effective these regulations were, and how well enforced, is not clear. However, the quality of adverts changed over the succeeding years, as illustrated by four adverts taken from The BMJ (Figure 1). Furthermore, the numbers of adverts that The BMJ carried fell considerably from year to year, from 1288 adverts (340 products) in a 12 month period in 1955/6 to 73 adverts (16 products) in a corresponding period in 1985/6. Perhaps the Act was effective? 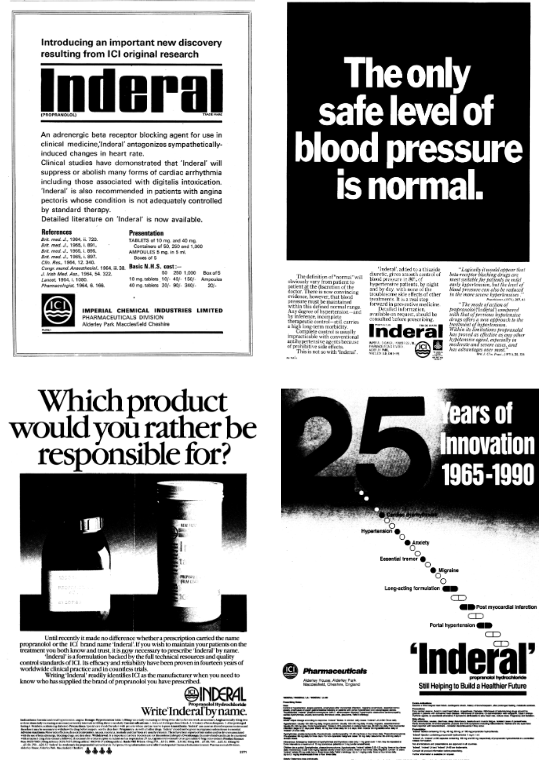 Figure 1. Four examples of advertisements for Inderal, published in The BMJ

• top left: an early advert from 1965; as an indication, treatment of digitalis-induced arrhythmias, included in the advert, was removed from data sheets after 1975, being unauthorized

• top right: an advert from 1972, including quotations from two publications, one of which states that “Within its limitations propranolol has proved as effective as any other  hypotensive agent …”

• bottom left: an advert from 1979, including information from the company’s data sheet on indications, dosages, precautions, use in pregnancy, adverse reactions, withdrawal, and prices; product licence numbers are also given

• bottom right: an advert from 1990, including much more information about the medication, taken from the Summary of Product Characteristics (SmPC)

The first beta-blocker, pronethalol, was marketed by ICI as Alderlin, named after Alderley Edge in Cheshire, where their laboratories were situated; after pronethalol was withdrawn, propranolol was introduced under the brand name Inderal, a near anagram of Alderlin; the next beta-blocker they marketed, practolol, was called Eraldin.