One might expect that if the definition of a technical term requires the use of other technical terms, the latter should have been in existence before the former, the definiendum (the term to be defined), came into existence itself. Things are not that simple, however.

Take the word “sterol”. It is defined in the Oxford English Dictionary (OED) as “Any of a class of solid, unsaturated steroid alcohols that occur naturally both free and in combination as esters or glycosides”. The first instance cited dates from 1913 in a paper in the Biochemical Journal by Charles Dorée, titled “Note on isocholesterol, coprosterol and the classification of the sterols”. There is, however, a slightly earlier example, from a paper published on 9 September 1910 in the Proceedings of the Royal Society of London, on the cholesterol content of rabbit serum: “…the phytosterol of vegetable food can be absorbed during digestion in the blood stream, causing an increase in the sterol and sterol ester content …”.

However, the word “steroid”, used in the definition of “sterol”, dates from much later. The earliest citation in the OED is from 1936, in another paper in the Proceedings of the Royal Society of London, by Callow & Young, titled “Relations between optical rotatory power and constitution in the steroids”, in which we read, “The term ‘steroids’ is proposed as generic name for the group of compounds comprising the sterols, bile acids, heart poisons, saponins and sex hormones.” Given its wording, this citation is unlikely to be antedated.

The IndoEuropean root STER meant stiff or solid. The earliest English examples of words derived from it are from Teutonic sources. They include stark, which originally meant hard and unyielding, starch in all its stiffness, strut, to move stiffly, stern, start and startle, the stiff sternum, and various birds whose movements may have been regarded as being in some way stiff, such as storks, terns (genus Sterna), starlings (Sturnus), ostriches (Struthio), and redstarts.

In German sterben means to die, to become stiff (Figure 1). To starve originally meant to die or cause to die and then specifically to die from want of food. 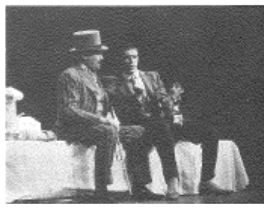 The Greek word στερεός, solid, gives a large range of English words, including stereochemistry and stereoisomerism. The earliest of these is stereometry, introduced into English in around 1570 to denote solid geometry, the art or science of measuring solids. Another Greek word, στηρίζειν, meaning to set fast or support, gave στήριγμα, a prop or support, from which we get sterigma, a ridge extending down the stem of a plant below the point of attachment of a leaf.

In Latin torpere means to be stiff or paralysed with fear, giving us torpid, torpor, and torpedo, originally applied to the fish, the crampfish or numbfish, whose electricity paralyses. Stirps is the stem of a tree, which can be exstirpated.

The word “sterol” is a back formation from other words ending in “-sterol”, steroid alcohols, of which the oldest is cholesterol (Greek χολή, bile; Figure 2). It was originally called cholesterine in French, cholesterin in German, and sometimes cholestearin, by confusion with glycerids or stearins, formed by combining glycerine and stearic acid. It was the stiffness of the sterols that gave them their name, nothing to do with their steroid structures. 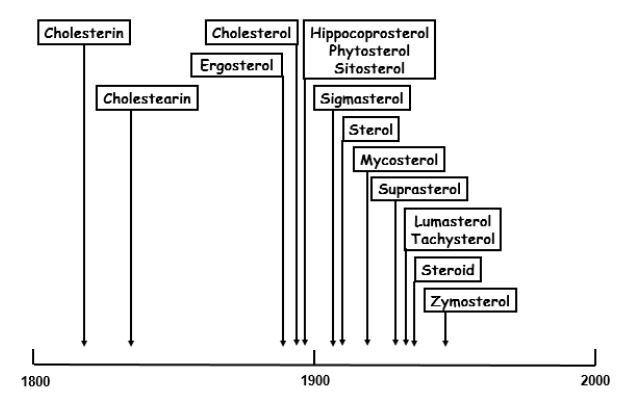 Figure 2. Timeline of the appearance in English of words ending in –sterol, mostly taken from instances cited in the OED; ergosterol was originally found in ergot; lumisterol and tachysterol are stereoisomers of ergosterol, respectively after the Latin word lumen, light, since ultraviolet light and heat cause decomposition of lumisterol to ergocalciferol, and the Greek word ταχύς, fast, since tachysterol is rapidly converted to calciferol when irradiated with UV light; suprasterol is a sterol that is produced when calciferol is irradiated for a prolonged period of time (hence “supra”); viosterol (from ultraviolet) is another name for calciferol; mycosterol is any sterol found in fungi or yeasts, zymosterols are sterols found in yeasts, and phytosterols are sterols found in plants; hippocoprosterol is a phytosterol that was originally found in horse faeces; sigmasterol is a phytosterol found in Calabar beans (Physostigma venenosum) and soya beans; sitosterol (Greek σῖτος grain, bread) is any of a group of sterols originally found in corn oil and also in algae

“Steroid” comes from “sterol” plus the Latin suffix Latin –oīdēs (Greek –οειδής), denoting resemblance. Here is the OED’s definition: “Any of a large class of naturally occurring or synthetic organic compounds characterized by a nucleus of 17 carbon atoms in the form of four fused rings (three containing six carbon atoms and one containing five) and with varying substituents and degrees of unsaturation, the members of which include sterols, many sex and adrenocortical hormones, insect hormones, bile acids and alcohols, cardiac-active glycones, and some sapogenins and alkaloids, and many of which have important pharmacological uses.”

Corticosteroids, glucocorticoids and mineralocorticoids, formed in the cortex of the adrenal gland, have widespread beneficial uses and often cause serious harms. Why do today’s circle squarers complain about harms from other medications but never about the corticosteroids?