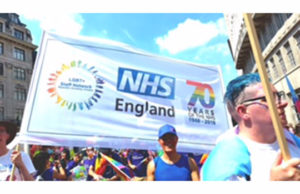 On the 7th of July 2018 I took part in the Pride in London parade to celebrate who I am and also to test my stamina. Britain was experiencing a heat wave and we had to be in the sun on the streets of London for hours. There was a joyous carnival atmosphere; friendly people with all sorts of costumes and on beautiful floats.

I marched with NHS England group. Coincidently it was also the week of the NHS’s 70th Birthday. As someone who has worked in the NHS as a doctor, and has been served by the NHS as a patient, it was a doubly sweet occasion; celebrating who I am and the birthday of NHS, and also being proud of the LGBTQ community and NHS. It was also almost 30 years ago that I marched with like minded people in a similar parade. In August of 1988, as a tutor of my medical school, I marched the streets of Rangoon with medical students in support of democracy. Whereas there was bravery and defiance then, this time there was joy and pride. Nevertheless, both parades were in support of human rights. Although I was 30 years older, I realised that my spirit for the occasion had not diminished.

Looking at my attire, one of my fellow marchers and a junior doctor in London remarked, “Hey, you are wearing NHS colours.” Huge crowds cheering us on along the way were marvellous. At many points they chanted, “NHS, NHS, NHS” and we chanted back. Seeing the NHS England banner they also sang “Happy Birthday to you” and we sang back. The reactions of the adoring crowds showed how much the NHS was loved by the British public, including myself. Walking in front of us was the Great Ormond Street Hospital group. At several points we had to slow down or stop briefly. During one of the stops I took photos with London junior doctors in the parade and also of my shoes with Pride rainbow laces together with those of two NHS marchers who were wearing the same.

When our group arrived at the end of the parade, I drifted towards Trafalgar Square and joined the crowds of spectators cheering on the rest of the parade. I saw the groups from Imperial College, King’s College and University College London (UCL). Later I saw GLADD (Gay and Lesbian Association of Doctors and Dentists ), Camden and Islington NHS Trust, NELFT NHS Foundation Trust, East London Hospital and West London Hospital. Further down the line were groups from Royal Free Hospital, UCL Hospital, Guy’s and St. Thomas’s Hospital. There were lots of international groups from Brazil, to Canada, US, Italy, and Taiwan.

The wide range of people in the parade and spectators confirmed to me that LGBTQ people are not a small group in the community, but we are everywhere, out and proud. Here again, among the spectators, whenever they saw a group with NHS sign they shouted “NHS, NHS, NHS”.

It was a beautiful day and a wonderful event and the public reactions towards us were moving. Pride in London confirmed to me that NHS is the Pride of Britain.

Wynn Aung graduated in Burma, and trained in histopathology in UK, Ireland, and the US with the Royal College of Pathologists and American Board of Pathology. He worked as an NHS consultant histopathologist in Essex.