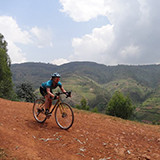 A recent Mail and Guardian article reported the dramatic decline in Rwanda’s neonatal mortality rate. A video documentary in the article features Nyamata Hospital, where I have been working as a volunteer paediatrician with the Rwanda Neonatal Care Programme (a collaboration between the Royal College of Paediatrics and Child Health, Rwanda Paediatric Association, and UNICEF). The article particularly praises the role of community health workers (CHW’s) in providing care to the Rwanda’s rural population, and I was struck by references to the role of the bicycle.

As a keen cyclist, in my spare time I have been exploring the Land of a Thousand Hills. Rwanda truly feels as though you are no sooner down a hill, before you are cycling up the next one. The roads tend to be built along ridges, so you are guaranteed a hill during every cycle. There are tarmacked roads between Kigali and main towns, but otherwise you will find dirt roads or tracks. In the rainy season the red dirt becomes a quagmire.

As a paediatrician I regularly see babies who have birth asphyxia due to prolonged labour; often the result of a long journey from home, to the health centre, to the District hospital. Having cycled around Masaka and Nyamata hospitals. I really started to understand the challenges faced, both by patients trying to attend hospital, and by community health workers trying to access their patients. Many villages are only accessible on foot or by bike, and even then the terrain can be incredibly tough.

Bicycles are by no means risk free. Atuoye et al, in their assessment of transportation barriers in rural Ghana refer to bicycles as a “risky” form of transport. A literature search for “bicycles” on PubMed is more likely to bring up articles about bicycle accidents, than their transformative power in community health. But there are several examples in Uganda of bicycles as incentives for community health workers and the use of bicycles is attributed to better rural health cover. In Tanzania, bicycles transported medical specimens to improve TB case detection. The World Bike Relief impact report 2016 reports positive stories of health care workers in Zimbabwe, Kenya, and Zanzibar.

Land of Second Chances demonstrated how bicycles revolutionised Rwanda’s coffee industry by making the harvesting process more efficient. In the Rwanda National Community Health policy community health workers argued that better transportation would solve the problem of geographic inaccessibility. Having cycled from the depths of rural Rwanda to the district hospitals that I work at, in my opinion, Rwanda would benefit from an injection of bicycles for community health workers to continue decentralisation of health care and improve communication between rural patients and their district hospitals.

Alice Willson is a paediatric trainee and keen cyclist from the North West of England. She was working for the RCPCH as part of their Rwanda Neonatal Care Program, looking into ways of improving neonatal discharge processes.