A few weeks ago I listed seven method of creating neologisms, or neologizing. The word “neologize” was itself a neologism in the early part of the 19th century, and it exemplifies an eighth method—making one part of speech out of another. Last week I discussed the spelling of words ending in –ize, so consider this neologistic method: take a noun or adjective; add–ize, making a verb; now change the –ize to –ization, making another noun, or –izable, making another adjective, or –izability, making another noun.

Some dislike this method, because they think that it is nasty, modern, and American to boot. They are wrong. The habit has a long pedigree, and the earliest examples are English. Of over 1300 –izations listed in the Oxford English Dictionary, from absolutization to zeolitization, the earliest go back to the 14th century: canonization (Wyclif, 1380) and exorcization (Chaucer, 1384). Other early examples include organization (1425) and authorization (1472), cicatrization (1543) and cauterization (1579), and aromatization (1603) and embolization (1677). [The dates in parentheses are those of the first citations in the dictionary.] Authors cited in the earliest examples include Coleridge, De Quincy, John Donne, John Evelyn, Joseph Priestley, and Thomas Addison. The most fruitful period was the second half of the 19th century, with 423 examples, and 125 new citations in the 1880s alone, including atropinization, keratinization, and metamerization. 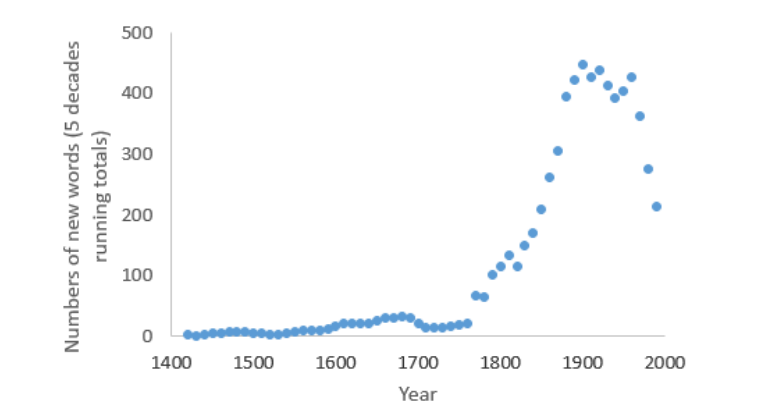 Figure 1. The numbers of new instances of words ending in –ization, from citations in the OED (accessed 1 June 2018; running totals from consecutive five decades)

The BMJ reviewed the New English Dictionary, which is what the OED was originally called, on 23 October 1886, after publication of its first two fascicles, and later carried further reviews and a regular feature titled “Medical Terms In The New English Dictionary”, highlighting medical words of interest. Among medical –izations that appear in the dictionary, picked at random, are anaesthetization (1860), not long after Oliver Wendell Holmes invented “anaesthetic” in 1846, but some time after the first appearance of “anaesthesia” in Bailey’s Universal Etymological English Dictionary of 1721; phlebotomization (1598), although “phlebotomy” first appeared in about 1400; and “vaccinization”, meaning vaccination continued or repeated until the vaccine virus has no effect, although the dictionary cites only one example.

“Medicalization” entered English in the 1960s having already been found in French (médicalisation) in the 1950s. Here is an early example from a paper titled “An abortion clinic ethnography” by Donald W Ball in the journal Social Problems in 1967, in which the inverted commas that surround the word imply its recency: “Treating as routine the patron’s problem helps minimize anxiety inherent in such situations. Parallel to  this is a ‘medicalization’ of the situation, also helping to disarm the patron vis-à-vis the deviant nature of the proposed transaction; at all times, the terminology is that of conventional medicine and surgery.”

The Oxford English Dictionary didn’t define medicalization until 1997 (in the third volume of its Additions Series): “To give a medical character to; to involve medicine or medical workers in; to view or interpret in (esp. unnecessarily) medical terms”, although it had earlier appeared in Jonathon Green’s Dictionary of Jargon (1987), defined as a sociological term meaning “the increasing practice of attaching medical labels to behaviour considered as socially or morally undesirable.” These definitions imply that by categorizing something as a disease, including natural processes, such as birth, the menopause, and the loss of beauty that accompanies ageing, you make its effects susceptible of being cured or at least ameliorated.

According to Ivan Illich, in his 1975 diatribe Medical Nemesis, doctors had medicalized various aspects of life, including ageing, death, pain, patients’ expectations, and healing and preventive therapies. Illich proposed that the things that people traditionally did or organized for themselves were being expropriated by governmental institutions and the so-called “disabling professions”. Institutionalized healthcare—medicalization—impaired health in the same way that, as he later wrote in The BMJ, “schools impeded learning; transportation contrived to make feet redundant; communications warped conversation”. Nowadays we might call that “too much medicine”. I prefer to call it too much healthcare.