In my last two blogs I discussed neologisms and how to create them, citing examples from the Times Literary Supplement. I have since come across another in the same journal (20 April, number 6003): amerilexicophobia (misprinted in the TLS as “amerilexidophobia”). Coined by Lynne Murphy in a book called The Prodigal Tongue (Oneworld, 2018), it means fear, dislike, or even hatred of linguistic Americanisms.

There are two targets for this dislike. First, spelling. This was the fault of the early lexicographers. Spelling wasn’t always standardised. Old English spelling was consistent, but the conjunction of Anglo-Saxon and Norman French produced inconsistencies that lasted until the printing press and dictionaries gradually forced regularity, if not always rationality. Samuel Johnson, in his dictionary of 1755, used the etymologically incorrect variant –our for many words that should have ended –or; in some cases this has survived (colour, honour), in others not (errour, inferiour). When the American lexicographer Noah Webster published his first dictionary in 1806 he introduced some spellings of his own, partly to restore the original etymology, but also because he wanted to make American orthography distinct from English; for example, he removed the u from –our (color, honor, as in Latin) and, ignoring the Latin etymology, changed –re to –er (center, theater).

However, Webster did not institute the change to e in words that are spelt with ae (or oe) in English. The digraph ae was originally a representation of the Old English letter aesc (pronounced “ash”); it disappeared in the 13th century, but re-emerged in the 16th century to represent the Greek αι or the Latin ae. It persisted in Greek and Latin names and technical vocabulary, but tended to disappear in words that entered general use, for example [a]ether, pr[a]eface, and d[a]emon. However, you will still find “daemon” in Philip Pullman’s trilogy, His Dark Materials, and as a name for a program (or part of one) that runs in the background without intervention by the user. The trend of using e instead of ae happened more readily in the US, although it took some time. In Webster’s New International Dictionary (1911), for example, “anaemia” was the main form of the headword, with “anemia” a secondary variant, but in the New Third International (1961) the reverse was the case. Likewise oedema/edema.

Now there are some whose amerilexicophobia is so intense that they think that some words with an e have been Americanised from ae, and they hypercorrect, putting the a, which they suppose has been dropped, back in. Sometimes they make it oe instead. This happens typically with words ending in –penia, a suffix that dates from the late 19th century.

The earliest example of this error that I have found is in a paper in the British Medical Journal in September 1904, titled “Discussion on the rôle of the lymphocyte”, in which the author wrote, “If we could trace any connexion between the variations in number of the two forms [sc. lymphocytes and polymorphonuclear leukocytes] there might be some excuse, but it is sufficient to show that either form may remain at the normal level during the time that the other is fluctuating widely to demonstrate their mutual independence, and at the same time the folly of calling a polynuclear leukopaenia by the term ‘relative lymphocytosis.’” The journal also contains examples from 1914 and 1960 (one each) and two from 1975, but none thereafter.

In papers indexed in PubMed, the earliest examples of words ending in –penia or –penic wrongly spelt as –paenia or –paenic are from the Edinburgh Medical Journal in 1926 (“Thrombopaenic purpura haemorrhagica”) and The Medical World (New York) in 1946 (“Thrombocytopaenic purpura treated with vitamin E”). An example from 1954 occurs in a letter to Nature, titled “Alkoxyglycerols in the treatment of leukopaenia caused by irradiation”, by two Swedish authors. There are two examples from the 1950s and four from the 1960s. Then the habit got going in the 1970s, when the number of papers in which –paenia, –paenic, -poenia, or –poenic were used was 0.86% of the total number of papers that included either spelling. This misuse is getting more common, and currently runs at nearly 2% (Figure 1). 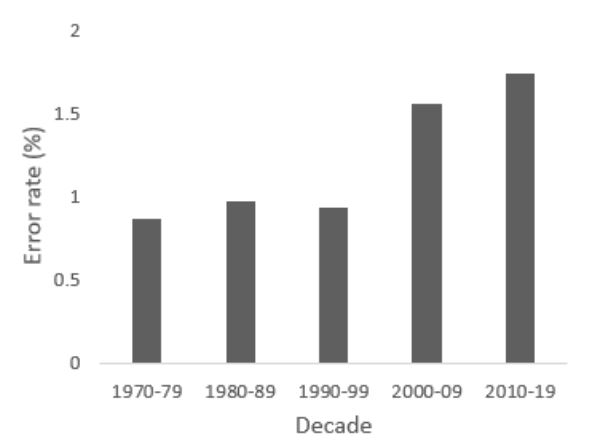 Figure 1. The frequencies (% of total) with which 19 words ending in  –penia or –penic have been misspelt –paenia or -paenic, plus some misspelt -poenia or –poenic (11% of all the errors), in papers indexed in PubMed compared with papers in which they have been spelt correctly

Those who make this error need to know that the suffix –penia comes from a Greek word, πενία, meaning poverty. It is related to the verb πένεσθαι, meaning to have to work for a living and therefore by implication poor or needy. To add in an a or an o, assuming that you are ridding the world of a vile Americanism, is an oegraegious errour.