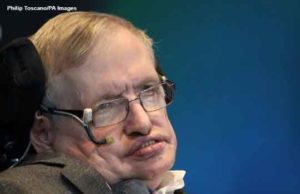 Stephen Hawking transcended astrophysics and physical disability to become the most famous scientist in the last half-century. Aside from his research output on black holes and cosmology, he received numerous scientific medals and was offered a knighthood. He published A Brief History of Time—a book that sold over 10 million copies—and is said to have created the “Popular Science” genre in bookshops. He has been on TV in Star Trek, The Big Bang Theory, and The Simpsons. He has been portrayed in an Oscar-winning film. He had nearly five million followers on Weibo, the Chinese social media platform. I first heard him as the man who told us to keep talking on behalf of British Telecom (and Pink Floyd).

Perhaps above all else, he will be remembered for his determination to survive and succeed in life. He was a 21-year-old postgraduate student when he was given a death sentence of a few years. He had started to stumble and had difficulty tying his shoelaces. He vividly recalled a hospital admission for tests. “After all that, they didn’t tell me what I had, except that it was not multiple sclerosis, and that I was an atypical case,” he wrote. “I gathered, however, that they expected it to continue to get worse, and that there was nothing they could do, except give me vitamins.”

The actual diagnosis has been debated, but it is likely that Hawking had amyotrophic lateral sclerosis, also called motor neurone disease (MND), and was one of the small minority of patients who fortunately defy the grim prognosis—even now fewer than 25% of patients survive for 5 years from diagnosis. Since 1979, he had worked with the Motor Neurone Disease Association charity in the UK and the charity said he had done “a tremendous amount to raise awareness of MND.”

Hawking himself credited two events for his determination after the initial tests. In hospital he had seen a boy with leukaemia die opposite him. Hawking said: “Whenever I feel inclined to be sorry for myself I remember that boy.” Out of hospital, his relationship and engagement to Jane Hawking changed his life and gave him “something to live for.”

Of course, he still lived in the inescapable shadow of motor neurone disease. He felt the disease most keenly at home and his biggest regret was not being able to physically play with his young children. In public, the disease was there in his distinctive synthesised voice after his bulbar muscles were reduced to producing unintelligibly slurred sounds. He sadly noticed “One’s voice is very important. If you have a slurred voice, people are likely to treat you as mentally deficient.” It was there in his slumped posture with only the ability to make tiny cheek movements detected by infra-red sensors to enable him to produce language. It was there in his custom electric wheelchair—except when he abandoned it in his now famous flight of weightlessness, with a look of pure glee on his face. Indeed, Hawking was asked why he undertook such risks and adventures. He replied, “I want to show that people need not be limited by physical handicaps as long as they are not disabled in spirit.”

He thought that suicide for people with similar conditions would be a “great mistake” and said, “However bad life may seem, there is always something you can do, and succeed at. While there’s life, there is hope.” In his own case, he said “I am damned if I’m going to die before I have unravelled more of the universe.”

Despite his own will to live, he defended the right to assisted suicide in recent years, speaking out publicly in support of the assisted dying bill in 2014. “To keep someone alive against their wishes is the ultimate indignity,” he said, warning that we should not take away the freedom of an individual to choose to die and noted that “We don’t let animals suffer so why humans?”

He also championed the NHS, most famously when a US newspaper, critical of Obamacare’s similarities to the NHS, stated “People such as scientist Stephen Hawking wouldn’t have a chance in the UK, where the National Health Service would say the life of this brilliant man, because of his physical handicaps, is essentially worthless.” Hawking’s understated reply was “I wouldn’t be here today if it were not for the NHS.”

In the last two years, he has been worried about the introduction of accountable care organisations in the NHS and chastised Jeremy Hunt over his biased use of evidence regarding “seven-day working”: “When public figures abuse scientific argument, citing some studies but suppressing others, to justify policies that they want to implement for other reasons, it debases scientific culture.”

At a recent conference, he concluded “The message of this lecture is that black holes ain’t as black as they are painted. They are not the eternal prisons they were once thought… If you feel you are in a black hole, don’t give up—there’s a way out.”

That is a message for everyone.