As I noted last week, animals are monophyodonts, diphyodonts, or polyphyodonts. Rodents and some cetaceans, for example, are monophyodonts—their teeth grow continuously and are never replaced. Humans, and most other mammals, are diphyodonts—they normally have two sets of teeth (dentitions), although the numbers of teeth in each dentition are different, so that the 20 deciduous or milk teeth and their replacements can be thought of as diphyodontal (Figure 1) and the other 12 as monophyodontal. Kangaroos, elephants, and manatees, unique among mammals, and some non-mammalians species, typically fishes and reptiles, are polyphyodonts, animals whose teeth are repeatedly replaced during their lives. 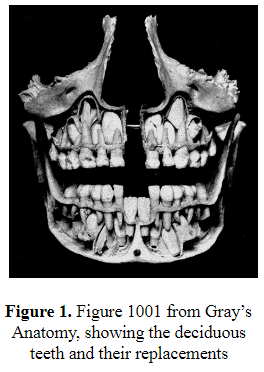 The prefixes in these words are all Greek. “Mono” is from μόνος, alone, solitary, or unique; “di” is from δισσός, twofold or double; and “poly” is from πολύς, one of whose many meanings is “many”, or in this case “more than two”. This is reminiscent of counting systems that go “one, two, many”, like those of the Australian Walpiri, or the Gumulgal from the Torres Strait, or the Pirahã of the Amazon, or like the rabbits in Richard Adams’s novel Watership Down, who can only count up to four, above which everything else is “hrair”, a lot.

The suffix -odont comes from the Greek word ὀδούς, a tooth, its root (the pun is inescapable) being ὀδόντ-, as in the dental terms odontology, orthodontics, and periodontal. The odontoid process is the tooth-like peg at the top of the axis, the second cervical vertebra, which articulates with the arch of the first vertebra, the atlas, above it, helping it to hold up the skull, like the mythical Greek giant Atlas, holding up the heavens (Figure 2). 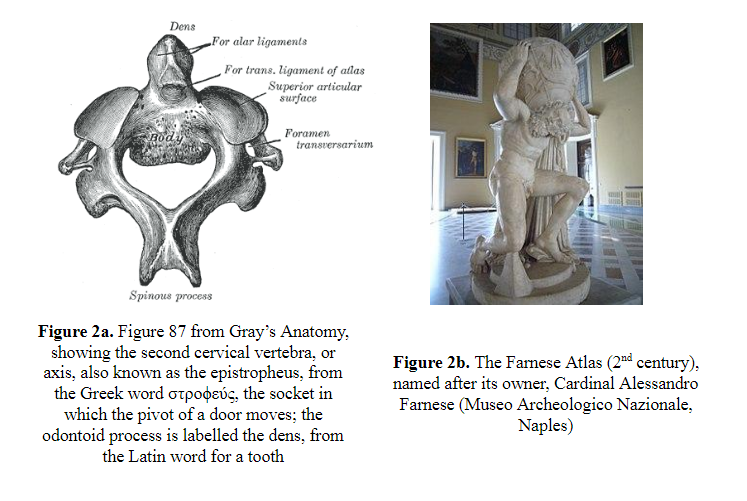 The infix, or filling in these dental words, -phy-, denotes being. The IndoEuropean root BHEU meant to be, to grow, or to exist, and, if to exist in a place, to dwell. Through Germanic forms this gave us “be”. A husband was one who dwelt in a house (hus) and a bauhaus, a bothy, and a booth are all forms of dwelling places, things you build, with neighbours who live nearby. A Boer lives on the land and farms it, keeping his cattle in a byre.

In Latin the BH in BHEU became b or f. In regular Latin verbs the future tense was marked by the suffix -bo (amo, I love, amabo, I shall love). Superbus meant being superior and dubius meant being in two minds (duo = two). The paradigm of the verb to be in Latin had only three forms, as opposed to the usual four: sum (present tense, I am), esse (infinitive, to be), and fui (perfect tense, I have been). “Fiat lux” means “let there be light”, and a fiat was originally a statement that something might be [allowed]. Futurus meant that which will be, the future. The verb futuere expressed the ultimate sensation of being. As Martial put it in his epigram 34, telling Lesbia to keep her door closed, “deprendi veto te, Lesbia, non futui”—“don’t get caught out being fucked”. However, “fuck” and “futuere” are not etymologically linked.

In Greek the BH in BHEU became φ. Greek derivatives include φύειν, to bring forth or beget; φύτεία, growth or a plantation; and φύς or ὀσφύς, the loins. Andronicus of Rhodes edited Aristotle’s manuscripts that dealt with natural science under the title The Physics (τὰ φυσικά). The next set of papers he called The Metaphysics (τὰ μετὰ τὰ φυσικά), simply because they came after (μετὰ) The Physics. Then, because The Metaphysics dealt with what Aristotle called “primary philosophy”, or ontology, metaphysics came to be misunderstood as “the science of that which transcends the physical”. The Greek word φῠσός meant origin, nature, or anything that arose through growth—form, constitution, temperament; apophysis, diaphysis, and epiphysis are parts of growing bones. The derived adjective φῠσικός meant produced or caused by nature, inborn, or native. A physician originally studied natural science, physiology is the study of natural function, physique is one’s natural shape, and physiognomy one’s natural face. From ϕυτόν, a plant, we get epiphyte, saprophyte, zoophyte, and phytotherapy, all related to plants, and neophyte, a metaphorical reference. From ἔμϕῠτος, implanted, we get imp, originally something that is grafted, hence a young shoot, and hence a young child, often mischievous or devilish. From ϕῦλον, a race, tribe, or class, we get phylum, phylogeny, and the symphyses pubis and mandibulae.