A study published in The BMJ attracted my attention when I saw it in the print issue of 11 November: “De-adoption and exnovation in the use of carotid revascularisation”.

Neither of these neologisms, de-adoption and exnovation, has yet made it into major English dictionaries—not surprisingly, since they have only recently been introduced into scientific texts.

Searching PubMed, Embase, Medline, and PsycINFO for “de-adoption” or “deadoption” as textwords, I found 34 papers. The earliest, dating from 2006, referred to “the rates of de-adoption of a drug when negative studies are published.” After that, there were only sporadic instances, no more than one a year, until 2015, when there were six instances; there were 10 in 2016 and already in 2017 there have been 12. Not yet many, but a growing number.

The prefix de- was a common etymological feature of Latin words and it is therefore common in English. It has many uses, listed in the Table (details from the Oxford English Dictionary).

In addition to these uses, de- was also added to verbs to signify undoing or reversing the action of the verb (as in dearmare to disarm, dejungere to unyoke, develare to unveil), and to form verbal derivatives of nouns in similar fashion (as in decollare to behead (collum, neck) and deflorare, to deflower). The prefix “de-“ in “de-adoption” is being used in this sense: adding de- to the English noun “adoption” reverses its meaning.

However, “adoption” was derived from the Latin verb adoptare, which is from the prefix ad-, towards, throughout, beside, before, plus optare, to express a desire for something or to choose. The verb de-adoptare does not exist, because classical Latin never added the prefix de- to words beginning with the prefix ad-. There is a verb deoptare, but that is an intensified form of optare, to choose. Still, English is not Latin, and de- is often used in English to signify reversal, whatever the linguistic origin of the noun or verb to which is it attached; e.g. dehydrate (Greek), deactivate (Latin), decipher (Arabic), debarcation (French), degauss (German), deice (Old English/Norse), and denoising (Catalan).

In the recent uses of “de-adoption”, “adoption” means “choosing something for one’s use or practice”. But the word was also used earlier, in a different sense. For example, in a 1988 book, Beginning Child Psychiatry by Paul L Adams and Ivan Fras, in a chapter called “Divorce Adoption and DeAdoption” [sic], “de-adoption” was defined as “the undoing of a previously consummated adoption”, where adoption means “the taking of a minor who is not one’s offspring into the legal relationship of child (OED). As Adams and Fras wrote, “A tenuous marriage . . . is the hinge for the revolving adoption–de-adoption door.”

“Adoption” also has a technical meaning in linguistics, “the assimilation of a word or phrase from one language into another without (substantially) altering its form”. English has a long history of adopting foreign words and phrases, known as loan words, such as sauerkraut, paprika, lasagne, vodka, and faux amis. In this context “de-adoption” could mean the deliberate ditching of such a word, although I know of no instance of such a meaning.

In a systematic review, Niven et al suggested that there are 43 (that’s forty-three) synonyms for “de-adoption”, although not all the words they listed (e.g. refutation, inappropriateness), albeit implying related ideas, were strictly speaking synonyms. The most commonly used (see the figure) was “disinvestment”, defined as “the processes of (partially or completely) withdrawing health resources from existing healthcare practices, procedures, technologies, or pharmaceuticals that are deemed to deliver little or no health gain for their cost, and thus do not represent efficient health resource allocation.” 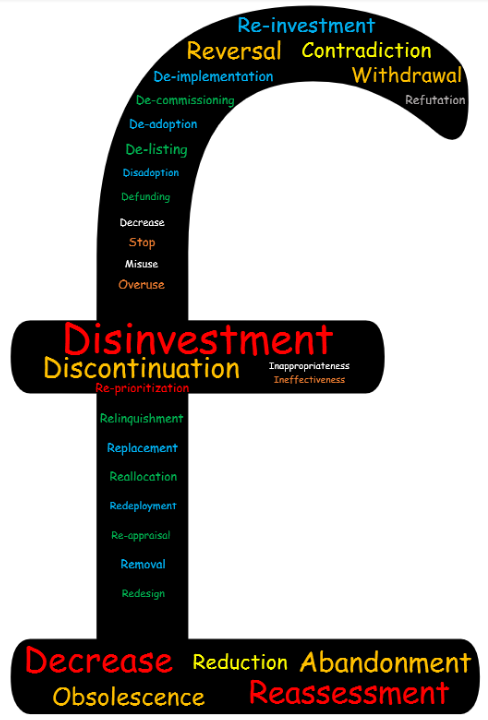 Figure: Following the example of Gnjidic & Elshaug, I have created a word cloud showing the relative frequencies of 43 words suggested to be “synonyms” of de-adoption in a systematic review by Niven et al; however, I have reduced them to 32 by combining some similar terms and omitting others and have converted them to nouns; as far as possible, I have arranged the words, particularly the less frequently used ones, in groups according to rough similarities of meaning

This idea has a long pedigree, originating with the economist John Maynard Keynes in 1930. Disinvestment has been an interest of the UK’s National Institute of Health and Care Excellence (NICE), and the word both implies casting off, like clothing or vestments, and incorporates an explicit reminder that cost is important.

The process of de-adoption could be applied to many different forms of excess: too many investigations, too much diagnosis, too much treatment, too much monitoring, in short, too much of everything. The hyphen in “de-adoption” is sometimes left out, but it is probably better left in, or the word could be read as “dead option”, although in one sense that is what it actually refers to. But it is perverse to talk about “de-adoption”, when “disinvestment” is well established, more commonly used, and a more relevant word.