Last week I referred to “‘competence’ and the more recent ‘competency’”. But both of these words first appeared in English, as cited in the OED, in 1594. So in what sense is “competency” more recent than “competence”? The answer lies in the countability of nouns.

The Danish philologist Otto Jespersen expounded the concept of count and non-count nouns in an unpublished lecture to the Copenhagen Academy of Sciences in 1911. As he explained, you can form plurals if you can collect two things alike. For example, two bananas (two of the same things). Or two fruits, an apple and an orange (two of the same kind). But we have no plural word for a magazine plus a stethoscope, except to call them two objects, and certainly no plural word for a magazine plus healthcare. The test of a count noun is that it cannot be used without a determiner or possessive (a book, that book, one book, my book). Music, traffic, and tact cannot be counted and do not need determiners; eyes and ears can—at least in English; in Hungarian the words for pairs of body parts are singular; one eye is referred to as a half eye. 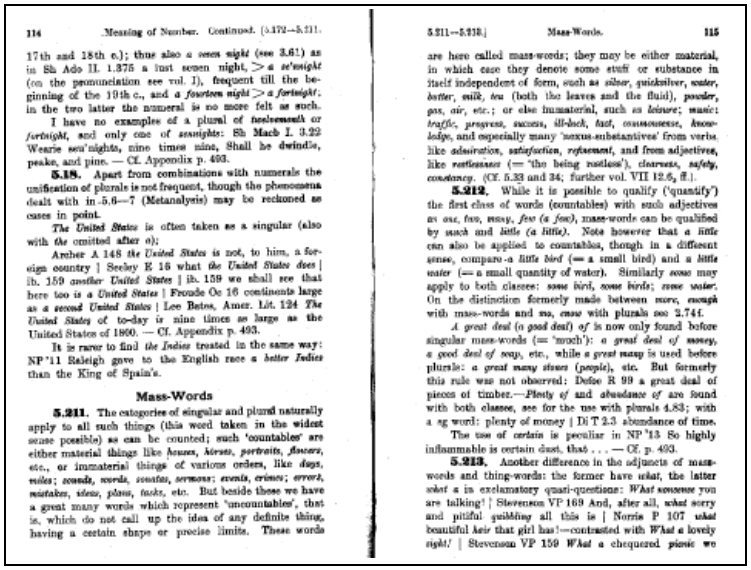 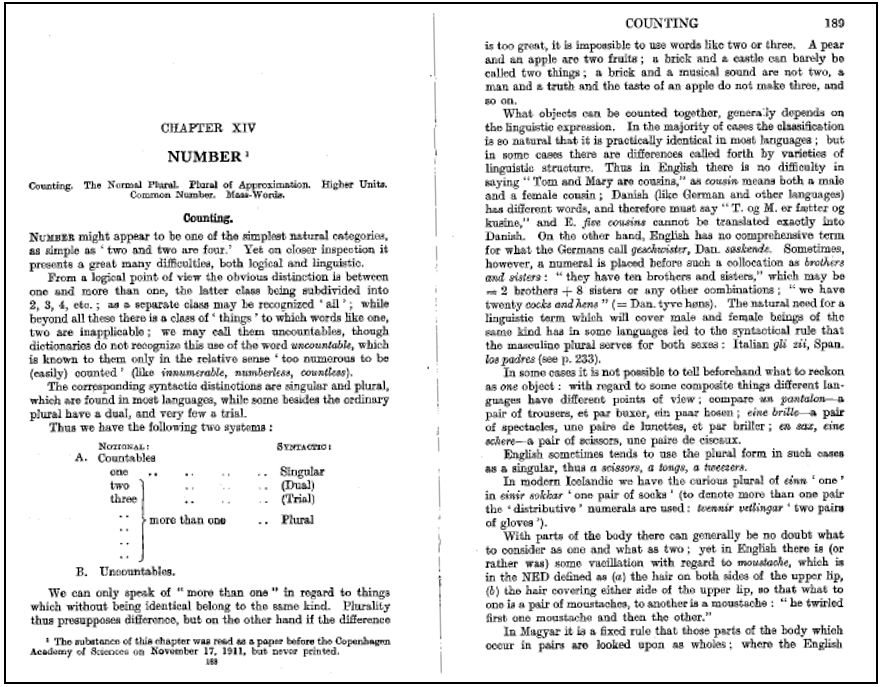 These are the first instances given in the Oxford English Dictionary of these uses of the words “countable” and “uncountable”, both from works by Jespersen.

Bottom panel: “There is a class of ‘things’ to which words like one, two are inapplicable; we may call them uncountables, though dictionaries do not recognise this use of the word uncountable, which is known to them only in the relative sense ‘too numerous to be (easily) counted’.” (The Philosophy of Grammar, George Allen & Unwin Ltd, 1924)

Some nouns have it both ways, depending on meaning. Chocolates in a box are countable—two chocolates, a few chocolates, many chocolates (but who’s counting?). Chocolate in a bar is not countable—much chocolate, little chocolate, less chocolate. Morbidity (sickness) is not countable, but comorbidities means diseases. This duality arises, for example, when a noun can mean both a countable object (a medication that you give or a prescription that you write) and an uncountable process (e.g. medication or prescription, acts of medicating or prescribing).

However, plurals of non-count nouns are often used, as in the examples given in the Table, and eventually they may become count nouns with new meanings. Here are some bête noires:

Table. Examples of plural uses of non-count nouns, chosen at random, mostly from the first page of 20 hits in PubMed in each case 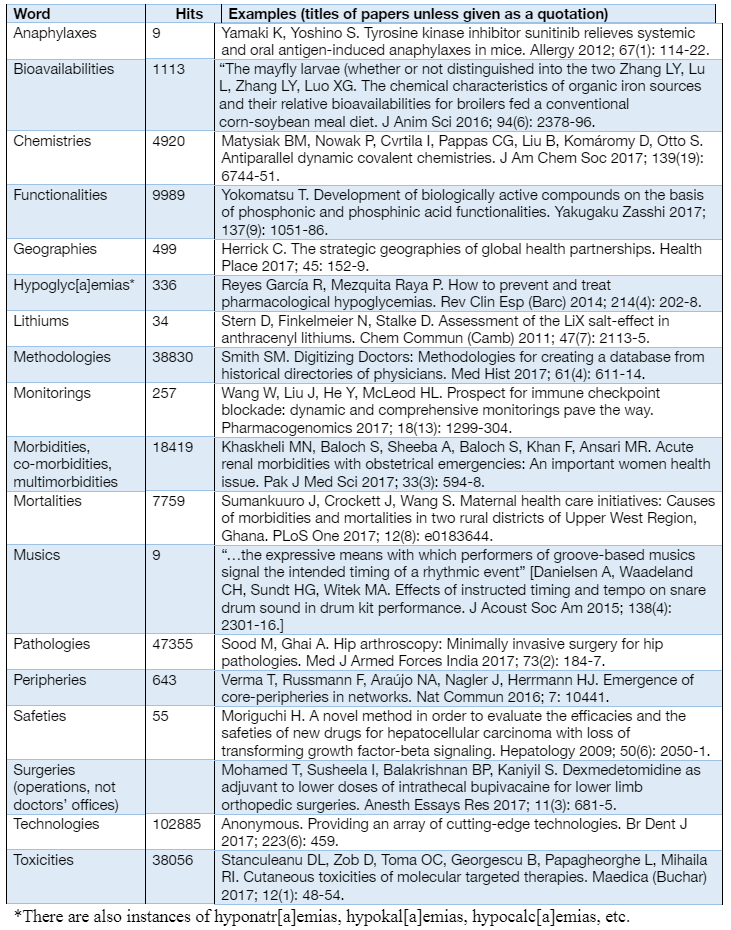 Nevertheless, some nouns that are properly non-count (also called mass nouns) can still have plural forms. This happens if there are different types of the thing, such as chemistries (organic, inorganic, physical, analytical) and musics (classical, country, electronic, indie, …). The names of chemical elements, which are strictly speaking non-count nouns, can be used in their plural forms to describe a range of different compounds in which the element occurs (e.g. “parenteral irons” for “parenteral iron salts”) or, for example, when the name of the element is used as shorthand for its concentration (e.g. sodiums of 140, 145, and 150 mmol/L).

Parallelling two meanings of “compete”, to be suitable or applicable and to rival, competency originally meant both an adequate supply of something and rivalry or competition. Both of these meanings soon became obsolete, but the idea of sufficiency persisted in later meanings: a sufficiency of means for living comfortably or having those means; sufficiency of qualification; and therefore the capacity to deal adequately with a subject, which is the main meaning that it has today. It also gained some technical meanings, which it shares with “competence”: in law the quality or position of being legally competent; in geophysics the ability of a stream or current to carry fragments of a certain size; in biology the ability of embryonic cells to develop in response to a stimulus. In linguistics, competence is what the speaker of a language knows rather than what he does (performance), a distinction, knowledge versus skill, that Noam Chomsky propounded; “competency” does not share this meaning.

However, for some years, and particularly latterly, “competency” has become a count noun, meaning an important skill that is needed to do a job, as in “key competencies” or “core competencies”. Despite being something of a buzzword, it is surprisingly old. The earliest example that I have found comes from The Anti-Slavery Reporter in 1832: “many have competencies which enable them to live well with economy in this country.”

One thing is for sure, competency certainly counts.