Dr Tedros set out his priorities on SDGs

The 67th WHO European Regional Committee meets on the Danube

Bridges bring people together. In 1849 the construction of the Chain Bridge, a triumph of artistry and engineering designed by an English engineer, joined the historic Hungarian cities of Buda and Pest. But bridges are not only physical. The city we now know as Budapest has long acted as a cultural bridge between different parts of Europe, with its architecture and cuisine influenced by its occupation, at various times, by the Hapsburg and Ottoman Empires. In 1989, the entire country of Hungary acted as a bridge, opening its borders to allow East Germans to travel to the west and beginning the process of reunifying a Europe divided by an Iron Curtain. It was therefore very apt that Budapest was the setting for the 67th Regional Committee of the European Region of the World Health Organisation, from the 10 – 14 September 2017. This brought together countries from every part of Europe, as representatives from the Region’s 53 member states sought solutions to the major threats facing the health of their people.

This wasn’t the first time that the Regional Committee had met in Budapest. The previous occasion was in 1969, at a time when Europe was very different. Among those attending then were representatives of the USSR and Yugoslavia, entities long replaced by their constituent republics. They were joined by Algeria and Morocco, still considered part of Europe, but Cyprus was absent, only joining the European Region in 2004 following its accession to the European Union. As usual, the European Union member states spoke as one on major issues, on this occasion through the Estonian delegation, as holders of the rotating Presidency, something that would have been unimaginable back in 1969.

Some items on the programme then and now were the same, reflecting the need to undertake certain formal functions. But much else had changed. An agenda once dominated by particular medical conditions and the training of health workers was now focussed on what has come to be known as “Health in All Policies”. The Regional Director, Zsuzsanna Jakab, back in her home country, led the audience on a fast-paced journey that reached all parts of the continent, touching all of the major challenges to health. Staff from the Regional Office, often working in partnership with other organisations, were working on issues as diverse as the environment, antimicrobial resistance, healthcare financing, NCDs across the life course, and health emergencies, such as the refugees fleeing to Turkey and across the Mediterranean. One often hears that the media have to resort to trivia, such as the latest scandal involving some so-called celebrity, to fill their 24 hour news schedules. Yet the work of this one Regional Office could provide enough material for hours of gripping stories. 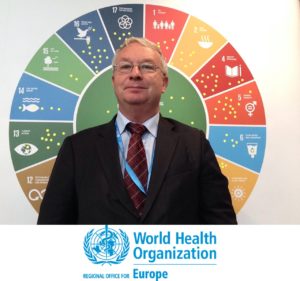 Another change from 1969 was the sense of connectedness. Although the topics covered were diverse, at all times there was a strong sense of common purpose, now provided by the Sustainable Development Goals (SDGs). Once the formalities were out of the way, the meeting began with the presentation of the Region’s Road Map to achieve the SDGs. These are incredibly important for the health community, for several reasons. First, they explicitly apply to countries at all levels of development, building bridges north and south. Whether you are the President of Nigeria or the Prime Minister of Norway, the world expects you to deliver on them. No matter how well a country is performing, it can always do better. Second, although only one of the goals, number 3, is explicitly about better health, health features prominently in many of the others. Indeed, those attending were invited to stand in front of a poster featuring all the SDGs and place stickers on those that they are working on (see photo). None was empty. This offers tremendous scope for the health community to engage with other, building bridges to often more powerful and better resourced ministries across government, as well as with civil society.

This sense of connectedness pervaded the programme. The WHO has, justifiably, often been criticised for working in silos, both in its failure to collaborate with other organisations, and its seeming inability to overcome its own internal organisational barriers. Yet, this year, there were many examples of collaboration to address some of the most complex problems, such as TB-REP is a partnership seeking to implement effective policies to tackle one of the most intractable problems, multi-drug resistant tuberculosis. Bridges are also at the heart of two major conferences in the forthcoming year, as WHO works with its partners in the the European Observatory on Health Systems and Policies and beyond looking at ways to ensure that health systems are able to respond to the challenge of non-communicable diseases and, in June 2018, a return to Tallinn, ten years after a landmark conference that demonstrated clearly the mutually reinforcing relationships between health systems, health, and economic development. 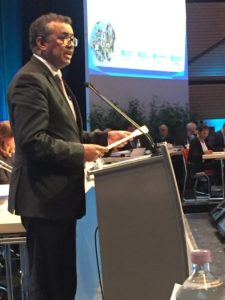 While the meeting was addressed by many well-known speakers, one in particular was awaited with considerable anticipation. This was the new Director General, Tedros Adhanom Ghebreyesus, more usually known simply as Dr Tedros (see photo). A former health and Foreign Minister of Ethiopia, he had only taken up office two months previously. Yet he has already made his presence felt in the global political arena, most notably at the recent G20 summit. All occupants of that post are different, reflecting their personal journey, their interests, and their leadership style, so it is invidious to make comparisons. But what was clear was that this was someone with a vision who was committed to making a difference. WHO is a difficult organisation, with the Director General and the Regional Directors accountable to the governments of their member states, not all of which always have the best interests of world health at heart. Inevitably, it can be difficult to challenge them. But in his first intervention, no more than a few words in the opening ceremony, he came straight to the point. While he would later range across the many challenges to health, he had one practical plea to the governments represented in Budapest. It was embarrassing that only 9 out of 53 in the European Region had ratified the Protocol on Illicit Trade in the Framework Convention on Tobacco Control. Worldwide, only 30 countries have done so and it cannot come into force until that reaches 40. In other words, he was giving the health ministers their homework.

The following day, he set out his priorities. The starting point was the SDGs. He reminded the governments that they had all signed up to them. They were committed, and now they had to do something about them. His first priority was for the WHO to respond to emerging threats, of which one of the most important was antimicrobial resistance. A second, of growing importance in many parts of the world, is to provide health services in emergencies and rebuild health services in fragile and post-conflict states. WHO did not come out well in the reviews of the response to the Ebola outbreak in West Africa. Of course, WHO is only one actor among many in emergency responses, and it will not be easy to agree who should do what, but he was clear that, whatever the WHO does, it should have real added value. The third, and something that he has demonstrated personal commitment to as Ethiopian health minister, is strengthening of health systems and the achievement of universal health coverage. In particular, he highlighted the importance of access to essential medicines, an issue that featured prominently at the Regional Committee. Again, this will be challenging, given the many interests involved and the conflicts between those holding intellectual property rights and those advocating for affordable medicines for all. He then noted that, formally, within the United Nations system, WHO is the platform for global governance for health. However, in a much more complicated world, it is increasingly only one among many actors. He committed WHO to playing a much more active role in shaping the global health architecture but added that, while one of his priorities had to be raising funds for WHO, he was just as concerned about the entire resource envelope for global health, a major departure from the view that too often has prevailed in an organisation that, too often, has seen other’s successes as somehow detracting from its own. Finally, he raised one of the most challenging issues for WHO, its relationship with its member states. While committing to building bridges with them, at all times listening to their concerns, he made it clear that he expected them to deliver on their role in the partnership.

The WHO Director General has always been a physician. Yet, one previous incumbent took time out as a mainstream politician. Gro Harlem Brundtland served three terms as Prime Minister of Norway before taking up the post in Geneva. She was able to exploit the experience she had gained and the breadth of vision she had acquired to drive forward policies that have shaped the global health agenda, including sustainable development, action on violence, and concerted international action against the tobacco industry. Tedros has also taken time out, as Ethiopian Foreign Minister. He too has the connections that open doors at the UN General Assembly, the G20, and other fora. He has already forged links with world leaders, in particular Angela Merkel and Emanuel Macron, with France and, even more so Germany, now playing much more important roles in global health.

WHO has had a very difficult time in recent years. It has rightly been criticised for high profile failings, even if these have detracted from its achievements that receive less attention. Its work has often been characterised by fragmentation, competition, and even hostility, both with its potential partners and within its own structures. It is never easy to get everyone to work together for the common good but this year in Budapest there was a definite sense that the bridges were being built rather than torn down.

Martin McKee is professor of European public health at the London School of Hygiene and Tropical Medicine.

Competing interest: Martin McKee attended the Regional Committee as an advisor to the World Health Organisation.

Photos: The photo of Dr Tedros was taken by Martin McKee.

The photo of Martin McKee and the SDG poster, credit: WHO.