Dinesh Seemakurty’s idea for a business came to him as he sat by his grandfather’s hospital bed in Kakinada, India. His grandfather had chronic obstructive pulmonary disease and had been treated initially in the intensive care unit. He’d been discharged, which Seemakurty and his family interpreted as a good sign, but during the night his oxygen level dropped without anybody realising. Nurses measured vital signs, including oxygen levels, only every six hours. The next day he was rushed back to the intensive care unit but couldn’t be saved.

Seemakurty, who was a student in California at the time, imagined while he sat with his grandfather a business that provided continuous monitoring outside the intensive care unit. During his experience, he wrote down a note about a cost effective monitoring system for all patients.

Seemakurty had worked as an emergency medical technician in the United States, going with ambulances to attend very sick patients, and he’d learnt the importance of gathering data on patients rapidly. His job was essentially to stabilise the patients and gather data that the doctors could use to decide quickly the best treatment for patients.

Seemakurty went back to college in California and began to explore what was needed to develop a system that would be widely used. He and his partner Michael Maylahn worked with trusted hospitals and found that the hospitals recognised the need for monitoring outside of the intensive care unit but hadn’t bought any systems. The technology for monitoring existed, so it wasn’t a technical problem. Nor—despite his vision of a cost effective monitor—did it seem to be a matter of cost. The problem seemed to be that doctors, despite additional monitoring, didn’t feel more connected to their patients.

The founders, who won some prizes for their ideas while still students, moved into a practical phase. They built a prototype monitor, which, says Seemakurty, “was shit. It didn’t do much.” But they kept improving it and now have a monitor that measures heart rate, blood oxygen, respiratory rate, blood pressure, temperature, and even provides an electrocardiogram. By intention, they use standard probes, making it easy for all nurses to use.

The current version, which the company Stasis manufactures in India, uses simple icons rather than numbers like most monitors. I flattered Seemakurty by saying it looked like an Apple phone. He was overjoyed. Using a mobile app, you can see the patient’s measurements graphed over time with green showing when the measurements are normal and red when they are not. One of the company’s competitive advantages is that they have a mass of data on how patients stabilise and deteriorate.

But from early on, the founders knew that monitors alone, no matter how good or cheap, would not solve the problem of getting monitoring outside of the intensive care unit widely used. Seemakurty says “I knew that there were no answers to this issue. Nobody knows how to crack this problem.”

The answer seemed to be a holistic system, not just a monitor, and one that would be easy to set up and use, that saved doctors’ time, reduced costs for hospitals, and that doctors trusted. The system needed to perfect the components of connectivity, visualisation, and dissemination of the data. The crucial step seems to be connecting the information to doctors’ smartphones. Using an app, doctors have a list of patients and can click to see the measurements of any of them. The system indicates which patients may be in trouble, but intentionally there are no notifications. The doctors have to look at the data.

“But doesn’t that mean,” I asked, “that doctors are working constantly?” It doesn’t, Seemakurty answers, because only the doctors on call look regularly at the measurements. But if they need advice from more senior doctors it’s easy for those senior doctors to see the patient data wherever they are. Indeed, they can then see if any intervention results in improvement. (Although the data can be seen in real time, the data are stored in the Cloud, meaning that they remain available if there are power failures or loss of internet connection, which are common in India.)

I ask about the problems of training and maintenance. Stasis’s aim is that they will be able to ship the system and nurses will be able to start using it without any training. They seem to have achieved that goal in that nurses without any training can start using the system within 15 minutes. Maintenance, as it’s an internet based system, can usually be done remotely.

Although Seemakurty grew up in the US and “got used to a certain lifestyle,” he and his American partner decided to launch their business in India and aim to enter the American market later. India has a massive patient load, many small hospitals, limited intensive care beds, and also problems recruiting and retaining nurses. Many Indian hospitals have a 25% annual turnover in nurses, and even “good ones,” says Seemakurty, have over a 10% turnover. An Indian hospital, they hope, will buy the system—which is affordably priced—not only because intensive care units are usually full but also to improve the reputation of the hospital. In the US, the expectation is that the system will reduce readmissions to intensive care, which carry high costs.

To develop the business Seemakurty has returned to India and finds Indian life agreeable. I met him in Bangalore, and despite the city being clearly Indian and having crazy traffic, it has all the amenities of coffee shops, gyms, cinemas, bars, night clubs that high-tech workers require. The company is selling in and around Bangalore and is expanding to Chennai and Mumbai. They aim to sell all across India with partners and online distribution. Being successful in India will, they expect, open other markets in Asia, and already they receive requests from other countries. 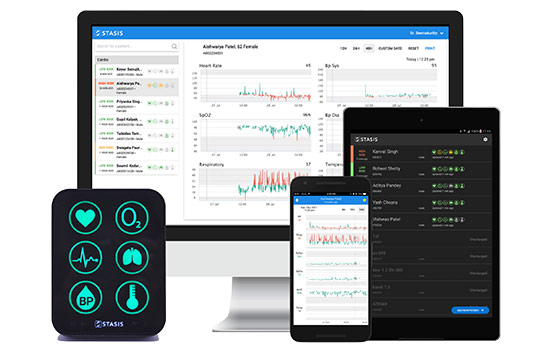 Although the business is far from established and the founders are concentrating on getting it up and running in India, they have a grand vision—a hairy audacious goal, in US business jargon: they want to be “global players” (rather than acquired by General Electric or another big company) and create “the connected hospital,” where all patients who need it are monitored. They envision a future where ventilators and other medical machines adjust themselves in response to signals from the patients. They hope as well to extend outside hospitals.

Neither I nor they know whether they will crack the problem of achieving widely used monitoring of patients outside of intensive care units, but they seem to be making good progress, particularly with the introduction of the app for doctors’ smartphones. I find the business exciting because of the energy, vision, careful study, and insights of the founders but also because it is shaping up to be a good example of “reverse innovation”—innovations that are developed in the high demand, low cost circumstances of low and middle income countries and then can bring benefit and reduced costs to high income countries.

Competing interest: RS was introduced to Dinesh Seemakurty by a friend who works in a hospital piloting the Stasis system. He has no financial relationship with the company and has received no payment from them, although they did pay for a lunch he had with them.