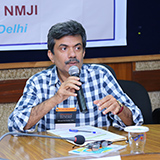 In the impoverished community in rural central India where my colleagues and I run a comprehensive primary health care programme, half of the population live below the poverty line [spend less than USD 0.5 per day] and undernutrition is rampant (median Body Mass Index 18.9 in men and 18.4 in women). With such impoverishment, it is not surprising that we witness high rates of maternal and childhood mortality, and an incidence of tuberculosis of over 400 per 100,000 population. What is surprising though, is the high prevalence of diabetes mellitus.

The typical adult diabetic patient I see weighs around 50 kilograms.

We diagnose around 450 new cases of diabetes mellitus each year. Of these, about 10% present during childhood and adolescence, and most of these require insulin to bring their disease under control. We do not test for autoantibodies to islet cells, nor GAD65, but the presentation is typical of Type 1 diabetes. The remaining 90% present during adulthood with a median age of just under 50 and suffer the familiar long term consequences of diabetics, such as retinopathy, nephropathy, neuropathy, foot infections and cardiovascular diseases. These patients would usually be classified as Type 2 diabetes, but in contrast to most people with this condition, only a third have a BMI greater than 23 (which is the Indian cutoff for overweight) and over a third have a BMI lower than 18.5. We do not have weights of these patients before they developed diabetes, but once glycaemic control is maintained, our observations show that their BMI increases only marginally and does not reach the normal range.

Overall in India, cases of diabetes are increasing at an alarming rate. The INDIAB study estimated that there were 62 million people with diabetes and 77 million pre-diabetic patients in India. Prevalence is strongly associated with affluence. This epidemiologic pattern is similar to that seen in developed countries where the vast majority of patients are overweight. Unsurprisingly, national guidelines emphasize calorie restriction and increasing physical activity—as they do in Western countries.

But what of patients such as those we see, who do not fit the typical phenotype of Type 2 DM? Interestingly, the World Health Organisation (WHO) included malnutrition-related diabetes in its older guidelines, but removed it in later iterations. Reports from Cuttack (eastern Odisha, India) and Ethiopia (Africa) describe a pattern of diabetes similar to our experience: median adult BMI of 20.6 kg/m2 with associated financial impoverishment, childhood malnutrition, younger age of onset, severe hyperglycemia needing insulin, and absence of ketosis upon withdrawal of insulin. In 1965, Tripathi et al coined the term “lean” diabetes for this pattern of diabetes and suggested that the “dual stress of intermittent starvation and overload on carbohydrate metabolism may be related to the atypical patterns of clinical diabetes”. George et al have suggested that lean diabetics may have increased cardiovascular and noncardiovascular mortality when compared to obese diabetic patients.

We believe that the standard guidelines for management of Type 2 diabetics are not appropriate for “lean diabetes” in poor rural communities in developing countries. Our patients are short of food, and many are malnourished and frail. Restricting calories further makes no sense.

What these patients do need is much more support to manage their condition and a better understanding of the problems they face. Almost half of our patients require insulin to attain glycemic control. But in rural India, insulin is often not available; nor are glucometers for monitoring therapy; furthermore, there is no reliable, steady food supply. Health systems need to address these wider issues as the burden of disease on these patients is great. People living in poor, remote farming communities have to do manual work to survive. It becomes difficult or impossible for them and their families to manage if they lose a limb due to amputation or become blind from retinopathy. And for those who develop renal failure, dialysis is not available.

There is a cruel parallel between lean diabetes at societal and cellular levels. In diabetes, body cells are surrounded by abundant glucose but cannot use it for generating energy. Similarly, our rural poor live in a country which has seen a marked rise in income and material resources, but cannot reap its benefits due to rising socio economic inequity.There is an urgent need to improve our understanding and treatment of lean diabetes and plan and deliver appropriate care to this neglected subset of patients.