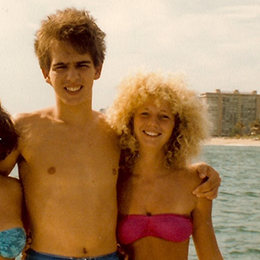 On Thursday 23 March, I conducted my usual clinic, but this was like no other day. I knew that at 1.30pm precisely, one of my closest friends was going to die.

Fabi’s death, at age 51, by euthanasia—something which, I had been utterly opposed to throughout my career—is legal in Belgium where she lived. I used to believe that if we got the balance of palliative care right to minimise distress, then “assisted dying” was an irrelevance. Yet her death dramatically reversed my own views.

I first met Fabienne “Fabi” Vanheuverbeke in Florida in 1983 on our gap years—with two other foreign exchange students (Tim and Françoise)—we formed a life-long bond. On her return to Belgium, Fabi, then 24, fell ill with a pituitary tumour and then a more widespread disorder, multiple endocrine neoplasia (MEN). She could not have children and developed multiple tumours in her pancreas, stomach, and liver over the next 27 years. In September 2016, I got the call I’d dreaded. She was now terminal, and we must all meet. In November, the four former exchange students met for one final time, along with Jan, her partner. It was a truly precious weekend—we dined, laughed, and remembered a lifetime of fun.

I last saw her in February and was so impressed by Fabi’s palliative care—it wasn’t all about drugs. Jan and Fabi’s closest friend took paid compassionate leave to share her care. In the UK, they would almost certainly have had to give up work to do so. Gazing at Fabi’s frail frame, I could just imagine what would likely have happened in the UK—ending up at some point on an A&E trolley. Yet when Belgium invests 10.2% of GDP on health and social care compared with the UK’s 8.5%, this makes the difference. Saying goodbye to my friend with a glass of Jan’s beer—he’s an award winning brewer—as she rested in her own living room seemed infinitely more civilised than a hospital corridor.

In March 2017, I got another call—Fabi was clear she’d had enough. The discomfort was too much, she was going to ask for euthanasia. Belgium has had physician assisted suicide—euthanasia—in place since 2002. In 2003, it accounted for 0.2% of all deaths, rising to 1.7%  in 2013. I was in a state of utter shock. She was clearly completely rational and with access to a superb palliative care team. Yet Fabi was asking to die, and die she would later that week. It could not be any sooner as a number of checks had to be made, to ensure that this was her fully informed decision. All patients have to give their written consent and be assessed by at least two doctors to ensure that they are mentally competent (a third doctor is required if they have a psychiatric condition).

It is utterly vital that the vulnerable are protected, yet assisted dying is fundamentally about consent and autonomy. I began to question my previous views. I totally respected Fabi’s wishes—who was I to challenge them? Fabi was pleased that I had changed, joking with a friend just hours before she died that when the UK law changed, they should call it Fabi’s Law.

I couldn’t be present for her death, but stayed with Jan on the eve of her funeral, and he explained what happened. Once the independent assessment had determined that her request was appropriate, her euthanasia was set for 1.30pm on the Thursday. That morning, Jan told me Fabi was positively counting the minutes to her time. Her family and friends were able to say their farewells by her bedside in her own home. Then, with Jan by her side, her GP, who had known her for decades, administered the injections, a sedative and barbiturate. She smiled, gave a gentle wave to Jan and her family, drifted to sleep, and died within minutes.

The doctors are required by law to report each case they attend to the Federal Control and Evaluation Committee—any deviation could result in a murder charge.

For most of us, death when it happens will be completely unexpected. For a small, but important minority, having a sense of control over how they depart this life—as Fabi did—is crucial to a good death. For those who oppose this as being a “slippery slope,” what right have they to impose their view on others such as Noel Conway?

Legalised euthanasia is available in the Netherlands, Colombia, and Luxembourg, as well as Belgium. In Switzerland, Germany, Japan, and Canada, doctor assisted dying, where patients take the final action themselves, is legal. In the US, doctor assisted dying is legal in Oregon, Vermont, Washington, California, and Montana. No one is forced to opt for assisted dying, no more than anyone is saying you are forced to get married. But in some other countries, there is now a choice. Elsewhere, for those who can afford it, there is the desperate trip to Dignitas to die. The campaign group “Dignity in Dying” estimates one person a fortnight from the UK travels to the Zurich clinic. This is an outsourcing of assisted dying to a foreign land due to our failure to deal with the legal and ethical issues.

Doctors and politicians are out of step with the public. In 2014, a YouGov poll found that 56% of the public would consider assisted dying if it were legal and they were suffering a painful and incurable disease.

In contrast, in a 2014 survey I helped organise for the Royal College of Physicians, 58% of doctors opposed a change in the law. One year later, MPs opposed a change in legislation. In the debate, Sir Keir Starmer—who, ironically, as head of the Crown Prosecution Service drafted the current guidance—stated: “We have arrived at a position where compassionate amateur assistance from nearest and dearest is accepted, but professional medical assistance is not unless you have the means of physical assistance to get to Dignitas.”

I didn’t agree then—I do now. A change in the law would enable those in the UK faced with a terminal illness the same choice that my friend Fabi had—a death with dignity on their own terms.

David Nicholl is a consultant neurologist at City Hospital, Birmingham.

The views expressed are personal and do not reflect the views of any organisation David Nicholl works for.

Patient consent: obtained from next of kin.

See also: Feature: A doctor who chose an assisted death