Universal health coverage is not just desirable, but eminently achievable 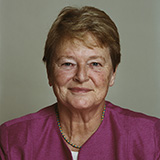 The new Director-General of the World Health Organization, Dr Tedros Adhanom, has made his priority clear: to work tirelessly to fulfil the promise of Universal Health Coverage (UHC). This was his message throughout his successful election campaign, which he reiterated during May’s World Health Assembly.

As one of his predecessors at WHO, I applaud his vision and ambition. There is a growing political consensus that UHC is not just desirable, but eminently achievable. At The Elders, where I am the deputy chair, we see UHC as the best strategy to achieve the overall health sustainable development goal.

This is an extremely important message for the global health community, which often tends to overlook the politics of health reforms in preferring to focus on technical solutions.

But across the world we know that in every country, extending health coverage is an inherently political process, especially when it comes to creating an equitable health financing system. This is because UHC can only be achieved by the state compelling healthy and wealthy members of society to subsidise services for the sick and the poor. In effect, UHC can only be reached through public financing where the state has a big role in raising revenues fairly, according to people’s ability to pay and allocating pooled resources according to health needs.

Not surprisingly, this transition to a publicly financed health system is often challenged by interest groups that tend to benefit from a fragmented privately financed system—for example private insurance companies, private hospitals, and those who are ideologically opposed to a welfare state. This opposition can be extremely well organised and powerful as we are seeing in the United States and South Africa.

Overcoming this opposition and launching successful UHC reforms therefore requires a large investment of public financing and political capital by the government. In fact, given the huge political costs and benefits involved, it is usually the case that UHC reforms must be led by the head of state, as ministries of health lack the power to raise sufficient funding and tackle UHC opponents effectively.

Thankfully political leaders across the world are increasingly recognizing that investing this political capital in equitable UHC reforms is worth it. Not only does UHC improve health indicators, it also brings economic benefits to countries in accelerating economic growth, reducing inequalities, and eliminating impoverishment due to health costs.

But perhaps what motivates political leaders most of all is that UHC is extremely popular with the majority of the population. Even in the United States, latest market research indicates that 60% of the population would like the US to adopt a publicly financed health system. People like UHC because in addition to better access to healthcare, they value being permanently protected from the financial risks of unexpected healthcare costs.

In The Elders, the group of independent leaders founded ten years ago by Nelson Mandela to work for peace and human rights, many of us have governed countries ourselves and know from first-hand experience how passionately people want better access to healthcare. For example former President Ricardo Lagos of Chile, on coming to power in 2000, increased public health financing substantially and guaranteed coverage of an agreed package of services for all Chileans.

Introducing and sustaining a publicly financed UHC system is simply good politics; not only is it objectively good for the country, it is also gives the vast majority of the people something they explicitly want. Call this “enlightened self-interest” if you want; what matters is that health outcomes are improved, and the poorest and most vulnerable in society can live with security “in place of fear,” in the words of the architect of the UK’s National Health Service, Aneurin Bevan.

We therefore look forward to working with the new WHO DG over the coming years to generate political commitment for UHC and bring the world closer to achieving the health sustainable development goal by 2030.

Gro Harlem Brundtland is deputy chair of The Elders, the independent group of former leaders founded by Nelson Mandela. She served as the Director-General of the World Health Organization from 1998-2003 and was the first female Prime Minister of Norway.