Tedros Adhanom Ghebreyesus has been elected the new Director General of the World Health Organization. Read his vision of what he hopes to achieve 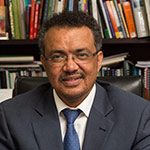 When asked why I am running to be the Director General of the World Health Organization (WHO), I always say it’s about people–their health, their lives, and their ability to achieve their full potential. Growing up in Ethiopia, I was surrounded by people who were hard-working and committed, and yet, I saw them struggle to break the cycle of poverty. I saw that no matter how hard they worked, the decks were stacked against them due to the unequal playing fields.

This inequity–not only in Ethiopia, but around the world–is what ignited my passion for “health for all” and has driven my life’s work. And this imbalance–and our opportunity to address it–is why I am a candidate for Director General of the WHO today.

I envision a world where everyone, regardless of who they are or where they live, can lead healthy and productive lives. The WHO is central to this goal. It is the only organization in the world that has the mission and mandate to protect and promote the health and wellbeing of all the people. It is no secret that we have a lot of work to do to fulfill this mandate. We saw WHO’s challenges most acutely and most recently in the response to Ebola in West Africa. We’ve also seen it in its diminishing prominence on the global stage and as the world’s leader on health issues. Member states too may have felt this directly in their voices not being heard at the headquarters level or in the WHO not being responsive to country and regional needs.

But I believe we have an opportunity to change that, and it starts with where we focus our attention and resources. If I am elected Director General, achieving universal health coverage will be my top priority, because I believe it is the best overall investment in health we can make. Where health systems are strong, we are better able to prevent, monitor, detect, and respond to health emergencies. At the same time, universal health coverage delivers disease prevention, health promotion, and treatment for communicable and non-communicable diseases alike, while ensuring individuals are not driven into poverty because of high costs.

In my tenure at WHO, I will work tirelessly to ensure universal health coverage is and remains a top priority at the highest political levels possible. We will ensure lessons and experiences–positive and negative–are shared across countries and regions. And we will work in close partnerships with countries and regions to help them tailor their programs to their specific needs.

For the WHO itself, we need to focus first and foremost on rebuilding confidence of member states and the global health community. This can start by ensuring we are honest about the obstacles the organization faces and being willing to address them at their roots. At the same time, the WHO’s ability to respond cannot be constrained by its resources. To address this, we will need to pursue increased and more flexible funding, broadening the WHO’s funding sources and moving away from vertical funding to basket funds that can be used for broad health priorities determined by its member states.

Additionally, I believe we need to invest in creating an organization that listens better. This includes ensuring the diversity of member states is represented in the leadership team, as well as strengthening regional and sub-regional organizations to represent the interests of member states. We also must build the systems to bring the voices of the often marginalized and most vulnerable into the decision-making process at WHO. By putting these voices at the center of the organization, we can ensure our policies and programs are inclusive, equitable, and meet the needs of as broad a group of people as possible.

Yes, I recognize that these are ambitious goals. Achieving universal health coverage or reforming the WHO are not simple objectives. But I believe these are exactly the types of goals we should be setting for ourselves–bold and the best we can achieve–and I have personally seen what happens when you set such targets.

Indeed, when we started our work to reform Ethiopia’s health system, we only had around one-fifth of the resources needed to deliver on our plan. But instead of limiting our thinking to what we could do with our existing resources, we set the target of covering everyone, then built the plan to get there. Certainly we haven’t achieved every goal, but setting our sights on the health system we wanted–not the one our resources said we could afford–pushed the boundaries of what was possible. I fundamentally believe this mindset is one of the key reasons we were able to achieve nearly all the Millennium Development Goals, and some of them, like reducing child mortality by two-thirds, ahead of time.

This is the attitude I would bring to the WHO. I think we should be unapologetically ambitious in the objectives we set because people around the world matter far too much to think on a small scale. Furthermore, the challenges we face today–including achieving universal health coverage, managing the triple burden of communicable and non-communicable disease, combined with health emergencies, and addressing the health effects of climate change–require bold action.

Of course, the path ahead will not be easy–and the WHO cannot achieve these goals alone. It will require strong country ownership, smart, strategic partnerships among member states, civil society, the private sector, academia, and the media and a commitment to engaging communities in their own health.

But I believe in the power of the WHO, and I believe in this moment. With the Sustainable Development Goals giving us mandate to aim for universal health coverage, we have an opportunity to make progress on health equity the likes of which we could have only dreamt about 20 or 30 years ago.

That is why I want to lead the WHO–to relentlessly work toward a world in which every individual can lead a healthy and productive life, regardless of who they are or where they live.