The term “monoclonal” is over 100 years old, having been first recorded, according to the Oxford English Dictionary, in a 1914 paper in the Philosophical Transactions of the Royal Society, by W E Agar, in which “polyclonal” was also first recorded. “Clone” and “clonal” are even older, dating from 1904. “Monoclonal” is derived from two Greek words, μόνος alone, and κλών, a twig, which descend in turn from the IndoEuropean roots MEN and KEL.

MEN, small or isolated, gives us words such as minnow, monk, and monastery. Monad is a word whose singularity gives rise to several disparate meanings, such as the number one, God, an absolutely simple philosophical entity, as described by Leibnitz, an individual human distinct from society, a flagellate protozoan of the genus Monas, a monovalent element or group, and a pollen grain or spore. Monembasia, now Monemvasia in the post-classical Greek pronunciation, from ἐμβαίνειν, to enter or embark, is a small town in the Greek province of Laconia, situated on an island in the Peloponnese, but linked to the mainland by a causeway, the sole means of reaching it on foot. From Monemvasia came the sweet wine that has come to be known as malmsey, via the Latin malmasia and Italian malvasia. Malvoisie is an alternative name for the wine.

KEL, to strike or cut off, as a twig is, gives us coloboma (Greek κολοβός, cut off), a defect in the iris of the eye, due to imperfect closure of the choroidal fissure, and Colobus, a genus of African monkeys with short thumbs. Greek κλάσις, a fracture, gives us osteoclast and iconoclast, and κλάδος, a branch, gives, among others, clade, a group of organisms that have evolved from a common ancestor, Cladocera, water-fleas with branched antennae (κέρας, a horn), and cladoptosis, falling of branches. Greek κλῆρος, a piece of land that is cut off, an allotment, and hence an inheritance, gives clerk, cleric, and cleromancy, divination by casting lots, a talent that some forecasters seem to have lacked in the election just past. Greek κλῆμα, a cutting, gives us clematis. In Latin calamus was a reed or a corn stalk, damage to which was calamitas, a calamity. Walt Whitman’s “Calamus” poems are contained in the collection Leaves of Grass. Gladius was a sword, giving us gladiator, gladioli, glaive, a lance or spear, and, via the Irish claideb, claymore. And a sword has a hilt, from the same root. Hilda means a battle and Mathilda, or Maud, mighty in battle.

Monoclonal antibodies, like other medicines, are given International Nonproprietary Names (INNs) by an expert panel of the World Health Organization, using principles that are not uniformly adhered to. When the names are confusable medication errors can occur.

Apart from the first, muromonab, the names of monoclonal antibodies all end in the stem ‑mab. Originally, substems were formed by adding a penultimate syllable, indicating the species of origin, and an antepenultimate syllable, indicating the target. The names were then topped off with a random (or “fantasy”) syllable. However, the system has evolved over the years. The most recent version is shown in Table 1, for comparison with the version that I included when I last discussed this, when I also gave examples of how the system worked. 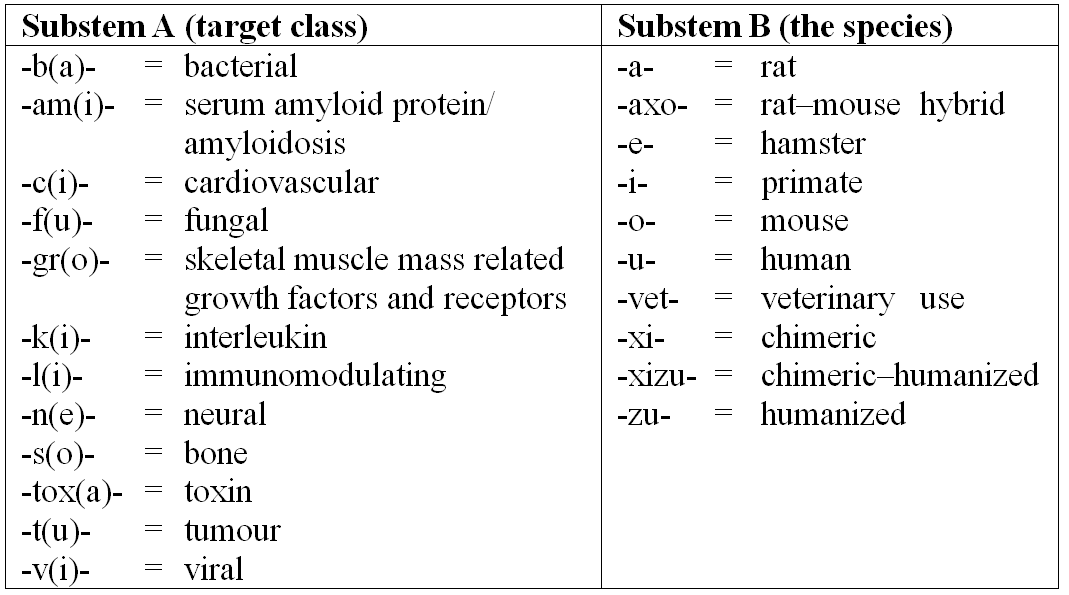 *Names are formed by joining a random prefix to a substem A and then a substem B and adding the stem (i.e. suffix) –mab; for examples see my previous discussion

The numbers of applications for new names have been steadily increasing, and there are now nearly 400 INNs in the list on the WHO’s MedNet site. About 60% end in one of only three endings: 162 in -zumab, including 56 in -lizumab, 40 in -ximab, and 35 in -mumab. The potential for confusion is obvious. Consider, for example, ruplizumab, siplizumab, and teplizumab, with their different targets and proposed clinical uses. It is now much harder to find new, distinct, easily pronounced, relatively short INNs. Furthermore, the B substems have been used for marketing purposes, and infixes have been chosen that flatter compounds in the absence of scientific evidence.

The WHO’s expert group has therefore decided to revise the nomenclature, discontinuing the B substems and simplifying the A substems, and has just published a new scheme (Table 2), to which further amendments can be expected. They claim that this will make it easier to find new INNs that are not likely to be confused with names already in use and will allow longer random prefixes, which should introduce greater diversity of names, potentially reducing confusion. The names are certainly branching out. 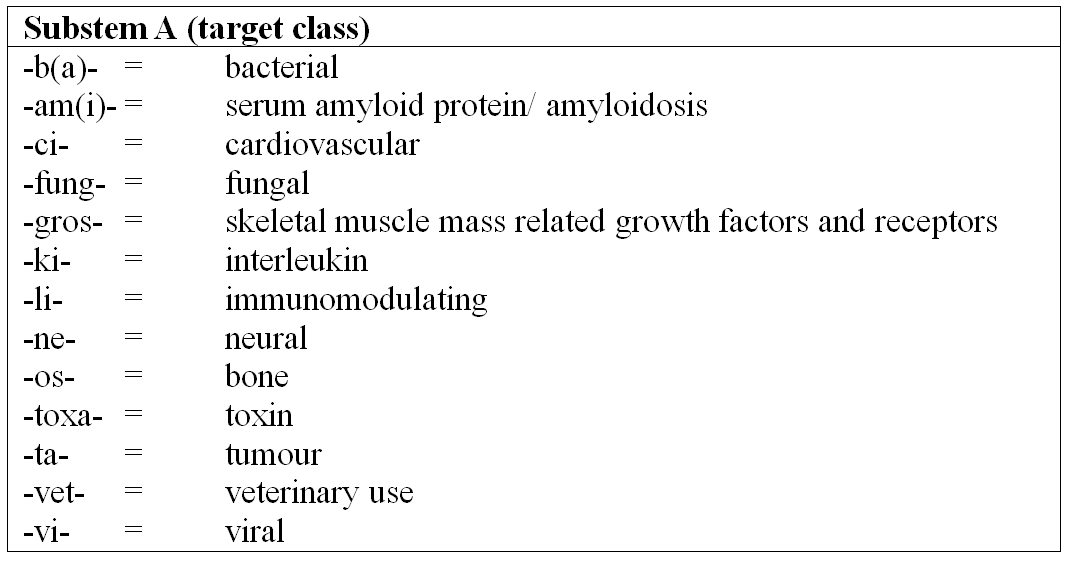