The future funding of our health and care system requires a national debate, says Niall Dickson. 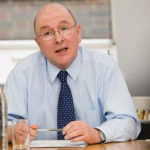 The nation faces a once-in-a-generation decision that will shape the fate of millions of UK citizens. How will it fund a health and care system under unprecedented demand?

This is not a normal election—if such a thing exists. The spectre of the referendum hangs over much of the debate, and for many of the politicians at least, it is about sealing or reopening that momentous decision. There has also been even more comment than usual about competence and personalities, all of which leaves less room for reflections on policy differences.

Yet there is a huge policy question that will require a national debate—the future funding of our health and care system. We have just undergone the most prolonged period of austerity in the history of the NHS accompanied by unprecedented levels of cuts to social care provision—the impact of this alone would demand a national conversation about Where Now?

But it is more than that because on its own that would presume we are living through a steady state in terms of demand—instead the prospects are genuinely alarming. In particular the number of people over 85 is set to more than double over the next 20 years, to more than 3.4 million. Needless to observe, this is the section of the population with the greatest health needs and earlier predictions that added life expectancy would not extend the tail of morbidity in the last few years of life have proved entirely wrong. More healthy life years have come with more unhealthy ones—and that is largely why we have a system that at best is struggling to cope.

By 2030 we are likely to have more than 6 million older people in the UK with a long-term illness or disability—that is nearly 9% of the entire population.

There is now a consensus among those running the NHS that the way services are currently run is unsustainable. They were not designed to cope with the management of large numbers of people living with long term conditions; above all they are fragmented with poorly developed provision in the community and little attention to preventing crises and maintaining people in their own homes or indeed in other community based facilities. The system cannot manage demand effectively now and simply will not cope going forward in its current form. To be fair, there are various plans in the different parts of the UK to tackle this, some of which show real promise, but there is little debate about the resources that will be needed to deliver them.

In England funding for transformation has been promised in the last two years, yet much of this has ultimately been spent on filling budget gaps. Real transformation needs a dedicated one-off fund of at least £2 billion a year for each of the next two years. It needs to be ring-fenced to protect it and make sure it is used to accelerate transformation.

However, that does not begin to deal with the underlying issue of longer term demand growth. We believe that resources for health and care are so important that they should be treated in the same way as international aid and military spending. In short it should be linked to the UK’s Gross Domestic Product (GDP). This would guarantee that as the economy grows so too would the resources for health and care and perhaps more importantly it would hold governments to account in a very visible way for the level of funding they are prepared to commit to. It would also enable us to have a relatively easy comparison with other similar economies. It is worth remembering that we currently spend 10% of GDP on health and care funding, well below France and Germany.

To determine the level of GDP spending that is needed there is a strong case for some objective assessment of need over the next ten to fifteen years. This could be determined by an independent Office of Budgetary Responsibility for Health which would not only provide a detailed analysis of what will be required to meet future need, but would also be able to comment on how well the health and care system was using the funds at its disposal; thereby holding both government and the NHS to account.

At the same time in England, bringing together health and social care into one government department.  A Department of Health and Care would encourage co-operation between the two sectors, underline their interdependence and help to drive the vital task of bringing them together in terms of commissioning and provision at local level. English social care has actually done worse than the NHS in recent years—treating the two together will help to make sure social care is not left behind in future. We cannot allow a perpetuation of the current position where one in eight elderly people is not receiving the social care they need.

The NHS Confederation has published its manifesto of 10 proposals for the new government after the 8 June election. Read the full list here.

Niall Dickson is the chief executive of the NHS Confederation.