It is no secret that the UK healthcare system is under strain. The percentage of GDP spent on healthcare is projected to fall to 6.6% by 2020/21, back to the same levels as the 1990s. For comparison, the OECD average (excluding the US) is 9.1%. Reminiscent of the 1990s, waiting times are rising and the system is failing to meet A&E waiting targets. If not a “humanitarian crisis,” this certainly represents considerable human misery.

A recent British Lung Foundation report, Estimating the economic burden of respiratory illness in the UK, finds that lung disease is responsible for £9.9 billion of direct healthcare costs. For comparison, the 2014/15 NHS budget was £135 billion. Combined with indirect economic costs due to lost productivity of £1.2 billion, this reaches a total £11.1 billion. This latter figure does not include non-remunerated costs, such as looking after children and other forms of care, so it is likely to be a significant underestimate. In addition to this financial burden, the report estimates the costs of the pain, suffering, and excess mortality due to respiratory illness. Taking the Department of Health standard estimate of a willingness to pay of £60,000 to avoid one disability adjusted life year, this equates to a monetised burden of £154 billion. 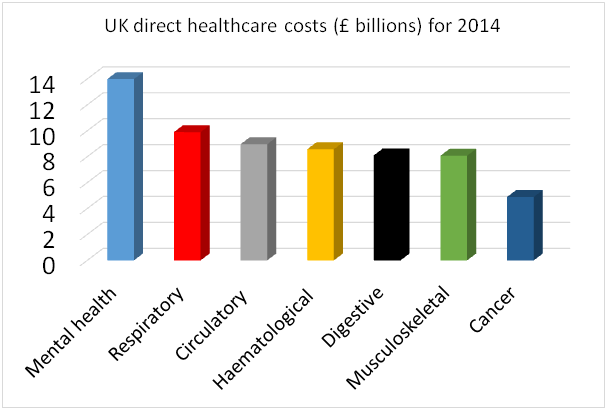 There are 550,000 new respiratory diagnoses per year in the UK, and 1 in 12 of the UK population will be diagnosed with a lung disease during their lifetime. Alongside heart disease and non-respiratory cancer, respiratory disease is one of the UK’s three leading killers, and lung cancer, COPD, and pneumonia are among the top six causes of death. Clearly lung disease is a major health problem, there are big costs associated with it, and these are on a scale similar to other large disease areas. What is striking, is the absence of a strategic clinical network to address this comparable to those for problems on a similar scale, for example, heart disease, cancer, and mental health. In the absence of this it is hard to believe that we are getting the best value that we could for this financial input. Of European countries, only Denmark, Romania, and Hungary have a higher lung disease mortality rate than the UK.

We urgently need a respiratory taskforce to guide development of an NHS strategy for respiratory health, to support improvements in identification and management of lung disease, to reduce health inequalities, and to optimise value. It’s not a competition, and the argument is not that we should spend relatively more or less on respiratory illness, but that to spend so much without structures of oversight and delivery seems like a form of institutionalised negligence. People with lung disease deserve better.