When I qualified as a doctor in 1993, trolley medicine was completely routine. Post take ward rounds would typically visit people who had been waiting patiently in corridors overnight or longer. I’m ashamed to say it never occurred to me to think of this as a “crisis”—it was just the way things were. The cause was obvious—chronic under-resourcing of the healthcare system. The Wanless report estimated that the UK’s cumulative underspend between 1972 and 1998 was £220 billion (the annual NHS budget in 1998 was ≈£35 billion). The remedy, bringing the proportion of GDP spent on healthcare in the UK funding up to the European average, was largely effective—adequate resources allowed system changes too and trolley medicine seemed to have been consigned to the past.

In an unwelcome 90’s revival, trolley waits are back with a vengeance. Patients are dying. A&E departments are struggling with the consequences of flat NHS funding since 2010. As NHS providers put it in State of the NHS Provider Sector, there is “an inability to cope with activity shocks that five years ago could have been absorbed but now cannot be.” Funding has failed to keep pace with population increase and the NHS is on course for a £20 billion/year deficit by 2020. Social care provision is under even greater strain, with an 11% reduction in local authority funding for social care of older people and a 26% fall in the number receiving it.

In this context Mike Adamson, CEO of British Red Cross, has described the situation as a “humanitarian crisis.” This has spawned several varieties of humanitarian crisis denialism. From those who are politically responsible, this is to be expected. Critics have accused NHS England of spin following memos to Trusts advising them to avoid language such as “black alert.” 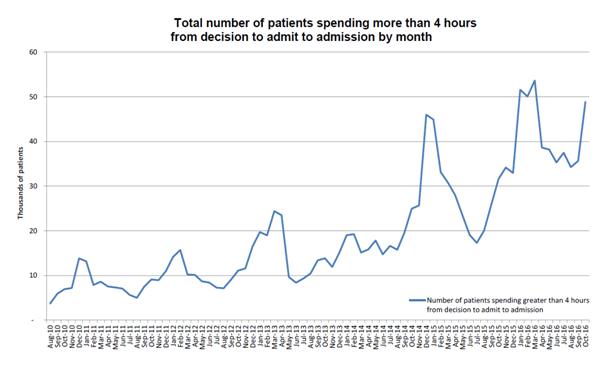 Some have argued that the phrase will put people off using the NHS so that they come to harm—this is hardly proportionate given the ubiquity of “don’t go to A&E unless you have to” messaging coming from NHS providers. In any case, it is an argument that would only be justified if there wasn’t a problem, which there patently is—see the graph above showing the increase in the number of patients waiting more than four hours to be admitted.

It’s also been suggested that use of the term somehow devalues the experience of people in worse situations. This argument, a form of inverse “whataboutery” has little justification. Perhaps the anxiety reflects moral complacency—humanitarian crises happen far away—we couldn’t possibly allow one on our doorstep. Surely if there was a crisis, a crisis long-foretold, we’d have done something to prevent it, or do more now?

A related “whataboutery” is that the phrase puts too much emphasis on hospitals rather than some other part of the system—social care, primary care, and preventive strategies. Of course people’s attention needs also to be drawn to what Mike Adamson himself describes: “Hundreds of thousands of people who used to get support from social care no longer get support as a result of billions of pounds of cuts.” It’s not a zero sum game and this is an argument for more explanation of the wide and interacting consequences of austerity, not for a down-playing of the seriousness of the problem.

Whatever term you use—the current NHS crisis was neither unpredictable nor unpredicted. Political choices are driving these crises, just as climate change drives extreme weather events. The NHS humanitarian crisis is a political crisis—what are we going to do about it?