Last week I discussed the origins of words to do with snakes, such as serpent and sepsis, derived from the IndoEuropean root SERP, meaning to creep or crawl. However, that wasn’t the only such root; SNEG was another. And while SERP led to Greek and Latin words, SNEG led to Teutonic ones, such as snail, snake, sneak, and maybe snark.

As Martin Gardner recounted in his annotated edition of The Hunting of the Snark, Beatrice Hatch, in a personal reminiscence of Lewis Carroll, a “child-friend’s sketch”, published in the Strand Magazine soon after his death in 1898, wrote that Carroll had told her in 1876 that the name of his imaginary monster, the snark, was a portmanteau word from “snail” and “shark”, although others have suggested that there is a snake there too, and “snarl” and “bark” have also been incriminated. However, these are probably post hoc rationalisations; Carroll later said that he was out walking one day when suddenly a solitary line came into his head: “For the Snark was a Boojum, you see”, which he then used as the final line of the poem. “I knew not what it meant, then; I know not what it means, now”.

Medical snakes have come in two varieties, double, in the Hermetic caduceus, and single, winding round the Asklepian staff. I think of them as snarks and boojums.

The double snake winding around a staff appeared on Babylonian objects such as cylinders and the libation vase shown in the picture (left), where it represented the god Gishzida or Ningishzida and looked like a single double-headed snake rather than two snakes entwined. Ningishzida was a messenger of the Earth Mother and was called the Herald of the Earth. His symbol therefore became a herald’s emblem. Which is why the Greeks called the double serpent wrapped around a staff a κᾱρύκειον (karukeion) from κῆρυξ, a herald. In Latin the Greek ρ (rho) became a d, giving the Roman name for the symbol, caduceum or caduceus.

In Greek mythology Hermes, as recounted in the Homeric Hymn to Hermes and Hesiod’s Theogony, was the god of thieves, mischief, dreams, and trade, and the messenger of the gods. In the last capacity he carried a κᾱρύκειον and wore winged sandals and a petasos, a winged hat. According to one story, Apollo, in return for the lyre that Hermes had invented and given to him, gave Hermes a wand, ῥάβδος, that could put men to sleep or waken them. When Hermes saw two fighting serpents he pacified them with the wand, around which they wrapped themselves. 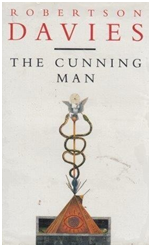 Although some have linked Hermes with the goddess of health, Hygeia, and in mediaeval times he was linked to alchemy, there is little evidence that he had a proper medical role. Nevertheless, some have used the double snake as a medical symbol, perhaps because Sir William Butts, physician to Henry VIII, chose it for the coat of arms that the king granted him on honouring him with a knighthood. It features, for example, in Robertson Davies’s novel The Cunning Man (figure, left). Others have used it since, notably the US Army Medical Corps and, in the past, the Wellcome Trust (picture, below right), who now use a different logo.

The staff with the single snake wrapped round it, on the other hand, does have medical connections. It was the symbol of Asklepios, son of Apollo, god of healing, who taught the centaur Chiron medical skills, which he passed on to Asklepios. Before that, the serpent was also described as a healing force in the Old Testament: “And the Lord said unto Moses, Make thee a fiery serpent, and set it upon a pole: and it shall come to pass, that everyone that is bitten, when he looketh upon it, shall live” (Numbers 21:8). 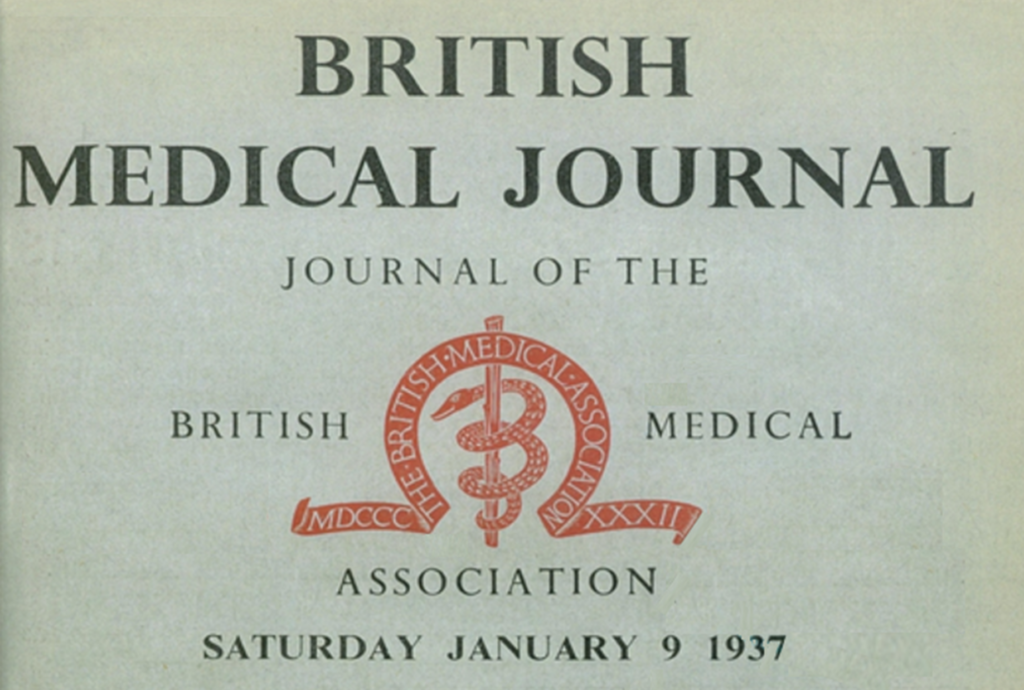 For some years, the British Medical Journal, as it was called then, used a logo that was designed by Eric Gill in 1937, depicting an Asklepian snake, as part of Stanley Morison’s cover design and accompanying a new typography. In Gill’s design, the snake, wound around a staff, was surrounded by a sash in the shape of a Greek capital omega. It was originally printed in red on a grey cover (picture above), but later appeared as black on blue. One of the instructions to potential designers of the new look BMJ in the issue of 27 January 1996 was “Drop the snake”. The BMA continues to use a different representation of the same symbol (picture, right).

The double snark really should be a single boojum.