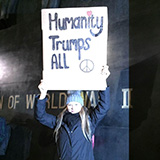 A year ago, the idea that a property magnate come reality TV star could become the most powerful person on earth was unthinkable. A week ago, the idea that he may have any involvement in the NHS seemed ludicrous. But then Theresa May was invited to become the first foreign dignitary to have an audience with Donald Trump, the new President of the US, and when questioned she refused to deny that the NHS may be on the table for a trade deal with the United States.

Liberal Democrat Leader Tim Farron said: “Theresa May must immediately clarify that the NHS will not be up for sale in any future negotiations with Trump. Hollowing out our health service in the name of a trade deal with the US would be an utter betrayal of most of those who voted to leave the EU.”

Indeed, it is an awful irony that many who voted to leave the European Union did so over concerns about UK Sovereignty, the Transatlantic Trade and Investment Partnership (TTIP), and a desire to improve NHS funding by £350 million a week. This time last year the government blocked freedom of information requests relating to legal documents regarding the NHS in the TTIP which prompted Unite, the trade union, to instruct leading QC Michael Bowsher. He opined that TTIP presented a “real and serious risk to the NHS.”

However, it seems that with Brexit we will be leaving the single market and as President Trump’s administration has removed the TTIP page from the White House website it seems a US-UK trade deal is very real and very likely to involve the NHS and its services. During their lunch the two leaders agreed to begin immediate talks on a trade deal that would come into effect following Britain’s exit from the European Union.

Alarmingly this deal would be potentially irreversible, as Mark Dearn, senior trade campaigner for War on Want explains, “If public services are combined with an investor-state dispute settlement (ISDS) “corporate court’ mechanism in a trade deal – something both the USA and UK are very keen on – a future attempt to renationalise any or all of the NHS would see US health companies suing the UK for lost profits resulting from their lost ‘market access’.”

The Shadow Health secretary, Jonathan Ashworth, frustrated by the lack of reassurance from the PM on this issue expounded “It is beyond belief that our Prime Minister is bartering away our health service in her desperation for post-Brexit trade deals……..The Prime Minister needs to urgently confirm that a rushed trade deal with President Trump will not be a Trojan horse for NHS privatization.” Instead the possibility of a President Trump fronted treaty that could bail out the struggling underfunded target-missing NHS in exchange for bringing profit of astronomic proportions into UK healthcare remains real.  May sidestepped the questions even at PMQs but did reaffirm that the Government remains “committed to an NHS that is free at point of use” cleverly without defining what it may be used for.

Over the past week many have been quick to rubbish the idea, suggesting the floundering health service would be an unattractive prospect for Trump, but imagine it viewed through his eyes; the world’s fifth largest employer of 1.2 million employees with non-competitive salaries and almost evangelical dedication. 1 million monogamous patients every 36 hours and only 30% in private hands.

Unfortunately, the shock and awe of the new president’s first week in office didn’t end with the looming prospect of a rushed US-UK trade deal involving our public services.  An executive order banning nationals of seven different countries from entering the USA was immediately enforced.  The first test of the fledgling “extra special relationship” between Trump and his “Maggie” passed with flying colours with an exemption for British Nationals within 24 hours.

It seems warm relations and trade deals are high on the agenda on both sides of the Atlantic but do the leaders speak for their electorate? When it comes to UK healthcare being propped up by US investment I suspect the answer is a very British “certainly not.”