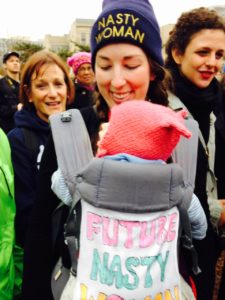 Did the Women’s March on Washington, across the US, and in major cities around the world have anything to do with medical care? Yes and no.

I’ve lived and worked in Washington, DC for more than 30 years, and I’ve seen a lot of demonstrations, and participated in a fair number as well. But I’ve never seen a demonstration quite like the Women’s March that was held the day after the inauguration of Donald Trump.

Much of the media attention before the march was on the celebrities that were planning to attend. And they were there—bold faced names like Scarlett Johansen and Katy Perry, Senators and Congresswomen, and numerous celebrities whose names I am too old to recognise. But because the permit was for an area that was much too small for the crowd that showed up, the vast majority of the approximately half million women, men, and children never saw or heard most—perhaps any—of the 4-hour program. 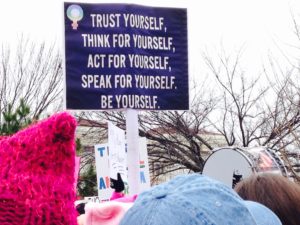 That’s why, compared to other demonstrations, the Women’s March had no one clear message imposed by the organisers. Instead it took on a life of its own, based on the signs and sentiments of those attending.  There were relatively few signs regarding the Affordable Care Act. Perhaps because it seemed so unusual, I noticed quite a few with drawings of the uterus—though the message was a popular feminist theme: “keep your laws off my body.” Abortion rights were not the major issue of the day, despite some media reports that anti-abortion female Trump voters were upset because they felt excluded from a women’s march. It seemed logical to me that Trump voters—even those who considered themselves feminists—were not going to feel welcome, because the bigger, broader message was aimed at those longing to “make America great again” like it was in the good old days:  We won’t go back! 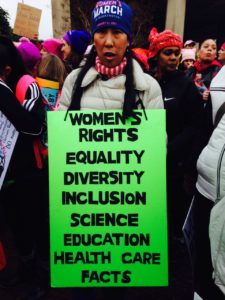 For some demonstrators, they were referring to not being willing to go back to days when women had limited reproductive rights. Others focused on not going back to a time when women were assumed to be less worthy than men and therefore merely the rare tokens in the halls of power, including the US President’s cabinet and inner circle. (Unfortunately, the new Administration has already gone back to those days in their most important Cabinet nominations.)

But what seemed to be the even stronger message was the refusal to go back to the days when sexual assault was generally dismissed as “locker room talk” rather than a public health epidemic that needed to be prevented.  The sea of bright pink “pussyhats” at the various marches—hats that many women told me they had made and given away for free to anyone who wanted them—held the key to the underlying message. There was considerable controversy before the marches about whether the pussyhats were a good joke or a terrible strategic blunder that took attention away from serious issues. But on the day of the marches, the pink hats were everywhere and the message was clear: we’re not going to forgive or forget the vulgar boast that Donald Trump made during a private conversation with a live mic, and we can’t let him or anyone else think it was acceptable just because he was elected anyway.  In other words: Women are worthy of respect and we are going to demand that respect.

The other clear message, repeated all day in what became the most popular chant at the Washington march was, “This is what democracy looks like.”  The subtext: We are peacefully demonstrating to let elected officials know that millions of Americans reject the direction they are going in, especially regarding issues of most importance to women. Those include access to affordable health care, access to safe reproductive health care, laws to protect women from sexual assault and harassment, laws to prevent violence against women and to help victims of violence, voting rights, and protections against discrimination on the basis of sex, race, or age.

Women’s marches across the US on 21 January all seemed to be much more substantial and dynamic than expected. Marches in other major cities around the world were too. I’m sure the messages varied, as they did in Washington. Here, the signs people carried had a range of messages, many hilarious, clever, or moving.  I’ve attached a small sample. A few borrowed slogans from the election, such as “Love Trumps Hate” and babies with signs announcing “Future Nasty Woman.” Some focused on traditional feminist policy issues such as reproductive rights and equal pay for equal work. But the underlying theme as we marched at the White House and the Capitol was: Women aren’t going to let elected officials take away their rights, their health, their well-being, or their self-respect.  We didn’t vote to turn back the clock, and we will fight every effort you make to do so.