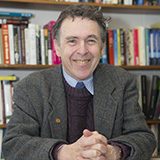 Almost 1% of the world population, mostly children, is forcibly displaced (including 11.7 million Syrians), an increase of over 50% from 2011. [1] Here I propose that the public health catastrophe in Syria be conceptualized as a canary case of “regional overload,” relevant to the emerging public health sub-specialty of planetary health. [2,3,4]

In 1990, King warned, in a prominent article in the health literature, of “demographic entrapment.” [5] Soon after, leading epidemiologist McMichael wrote of “planetary overload.” [6] Both concepts are related to Malthusian thought, and thus to the theory of evolution, which accepts, as fundamental, competition for finite resources, often between co-operating groups. [3,7]

Demographic entrapment is argued to occur in extreme cases when population growth outpaces that of development, triggering population “checks” including from conflict, famine, epidemics, and out-migration. [5] Examples include in Ireland (mid-19th century), Rwanda (1994), and, arguably South Sudan and Syria today. [6]

Planetary overload posits that the human impact on Earth is non-sustainable. [3,7] Planetary overload is unlikely to be homogenous; some regions will be overloaded before others. Plausible contemporary examples of regional overload include Yemen, the Sahel and Bangladesh; here I focus on Syria, given the magnitude of its current situation.

Two key papers have reviewed substantial evidence to conclude that climate change has aggravated the recent Syrian drought, unprecedented in severity, and, in turn, this contributed to food price shocks, rapid internal migration, and ultimately its civil war and population displacement crisis. [8,9] Analysts in support of the link between environmental stressors and conflict stress violence emerges in a “milieu” whose elements in Syria include rivalry, grievance, inequality and outside interference. Importantly, this is not “environmental determinism,” as some critics have asserted. Instead, climate change acts as a “threat multiplier” of conflict. [3,10]

The total fertility rate in Syria before the war was falling, but far above replacement. [2] High Syrian population growth reduced the “demographic dividend,” which helps to promote economic and human development in low-income settings with high population growth. A consequence of Syria’s high fertility rate was growing youth unemployment, reported as 48% in 2011, a five-fold increase from 2000. [2] Large numbers of young, underemployed, under-fulfilled men (“youth bulges”) often accompany high population growth, and have long been linked to violence. The need for economic growth to reduce Syrian poverty, accelerated depletion of groundwater, another key resource. [8,9]

The Planetary Health Commission argued that many health gains are achieved by eroding Earth’s natural systems that provide essential services “on which human civilisation depends”. It suggested that if populations attain health by exploiting the environment unsustainably then this is likely to be at the expense of other populations, now or in the future. [4]

Although humans have always modified nature, today, too many humans are feasting on the ecological underpinnings of global and planetary health. Those with ample “feed” thrive, but at an increased cost to others, including many of the Syrian population, whether killed, living in fear, or displaced.

I have argued that the population displacement from Syria can be conceptualised as a form of regional overload, in turn related to planetary health. But not all causes of regional overload are from overconsumption by the rich. Conditions in Syria, much of the Sahel, Burundi and elsewhere will be greatly improved by education, human rights, slower population growth, and greater scientific acknowledgement of these imperatives.

The problems besetting planetary health are formidable. Scientists and medical practitioners cannot, themselves, alter human destiny, yet have a duty of care to be as accurate and dispassionate as possible. A proper diagnosis may yet enable the remedies which can alleviate much future human suffering.

Colin Butler is an adjunct professor of Public Health at the University of Canberra, Australia, and co-founder of the NGOs BODHI and BODHI Australia. He is founding co-chair of Health Earth and lead author for the section on health in the forthcoming flagship Global Environmental Outlook report of the United Nations Environment Programme, called Healthy Planet, Healthy People.

Competing interests: I own stocks whose value should increase with greater action to counter climate change. I have received and anticipate future reimbursement for travel expenses, both as a speaker and co-author at writing workshops. I receive occasional book royalties (as an editor) and other author’s fees. I am a past recipient of an Australian Research Council grant. Most of my writing, speaking and the grants I have received or am applying for is relevant to the subject of this blog/opinion piece.