Richard Feynman, the great physicist, conducted a thought experiment in which he asked what one statement would he save if all of scientific knowledge was lost. His answer: “All things are made of atoms–little particles that move around in perpetual motion, attracting each other when they are a little distance apart, but repelling upon being squeezed into one another.” He added: “In that one sentence you will see an enormous amount of information about the world, if just a little imagination and thinking are applied.”

The idea that the world is made of atoms is 2500 years old and originates with Democritus, a Greek from Abdera. He was of the school of Miletus which believed that the world should be understood through observation and reason not through “fantasy, ancient myths or religion.” (The quote is from Carlo Rovelli’s Reality is Not What It Seems: The Journey To Quantum Gravity, a marvellous book. Indeed, everything I write here comes from that book.)

Democritus argued that “the entire universe is made up of a boundless space in which innumerable atoms run.” Everything, literally everything is atoms. Corelli summarises a metaphor that comes directly from Democritus: “Just as by combining the letters of the alphabet in different ways we may obtain comedies or tragedies, ridiculous stories or epic poems so elementary atoms combine to produce the world in its endless variety.”

Physics is close to poetry, and Corelli “plays a great riff” based on this idea: “Our life is a combination of atoms, our thoughts are made up of thin atoms, our dreams are the products of atoms; our hopes and our emotions are written in a language formed by combinations of atoms; the light which we see is comprised of atoms which bring us images. The seas are made of atoms, as are our cities, and the stars.”

But what prompted me to write this blog is the extraordinary list of works by Democritus, all of which are lost (see picture below). We know of Democritus only second hand, including in the writings of Aristotle. Corelli is respectful of Aristotle’s physics, but he condemns him and Plato for rejecting the ideas of Democritus “in favour of trying to understand the world in finalistic terms–believing that is, that everything that happens has a purpose; a way of thinking that would reveal itself to be very misleading for understanding the ways of nature–or in terms of good and evil, confusing human issues with matters which do not relate to us.” 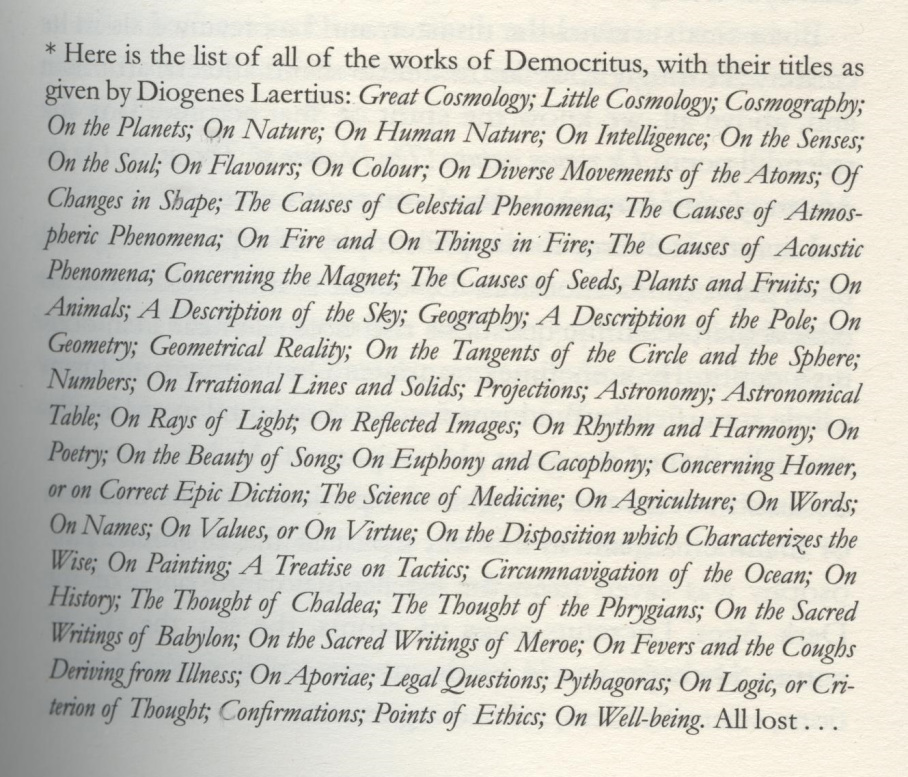 The philosophy of Aristotle and Plato led to the thinking that man was at the centre of the Universe and that the sun went round the earth and the stars were in a fixed heaven. Christianity consolidated this thinking, and it took more than a thousand years for science to be reborn.

Corelli thinks that “the loss of the works of Democritus in their entirety is the greatest intellectual tragedy to ensue from the collapse of the old classical civilisation.” The list is extraordinary, covering physics, chemistry, astronomy, biology, agriculture, mathematics, and medicine but also poetry, painting, music, ethics, geography, history, and gastronomy. The list is a poem in itself.

“What if,” conjectures Corelli, all the works of Democritus had survived, and nothing of Aristotle’s, the intellectual history of our civilisation would have been better….”