It’s unbelievable that one of the most remarkable innovations of our time—one that has prevented millions of deaths—has come under so much fire by a cacophony of misinformed voices in recent years. As the saying goes, vaccines have become a victim of their own success.

The relative rarity of vaccine preventable diseases in the US, compounded by misinformation, bad science, and unsubstantiated claims from anti-vaccine groups—which have been amplified by the media as “controversy”—have created mistrust, fear, and ill placed concerns about vaccines. This has caused some parents to be hesitant about vaccinating their children.

Pediatricians have continued to be champions and vocal spokespersons for the truth about vaccines: that vaccines are safe, effective, and save lives.

With the American Academy of Pediatrics (AAP), we wanted to study the experiences of US pediatricians with vaccine refusals, delays, and patient dismissals.

We used AAP periodic surveys in 2006 and 2013 to survey pediatricians who were members of the AAP. We asked them about their experiences with, perceived parental reasons for, and responses to vaccine refusals. In 2013 we also asked about vaccine delays. 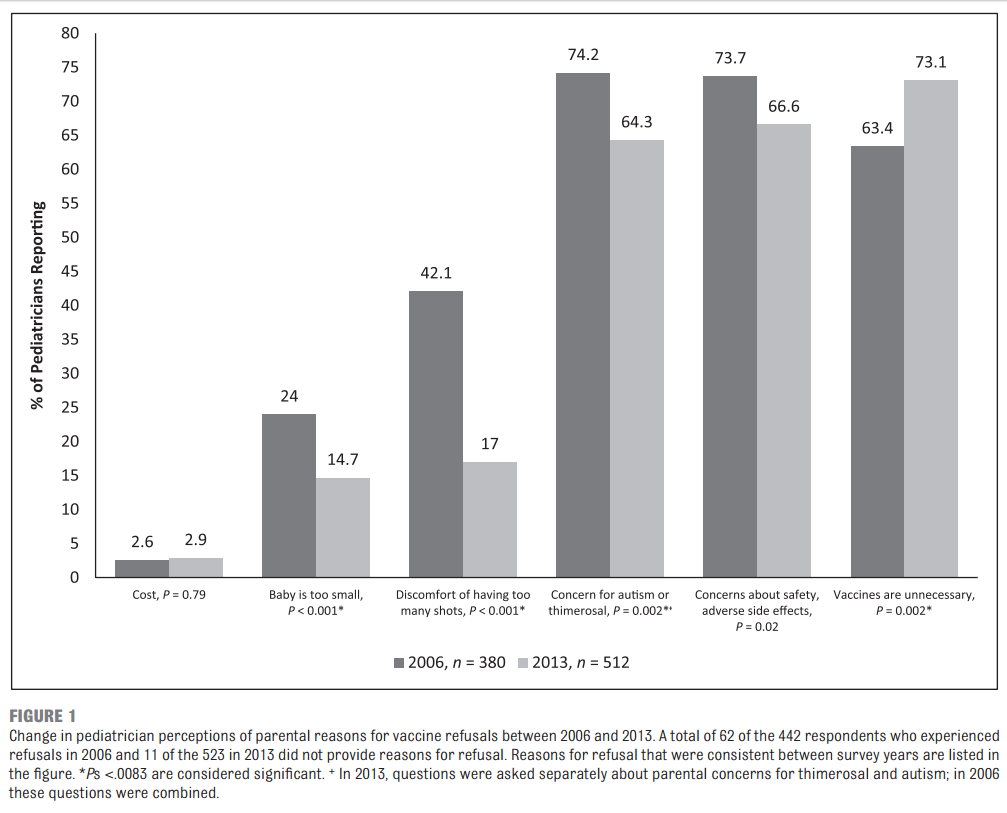 In 2013, 75.0% of pediatricians reported that parents delay vaccines due to concern about discomfort, and 72.5% indicated parents also delay because they are worried that the number of shots given may burden the immune system. Pediatricians who reported “always” dismissing patients (i.e. asking the patient to leave their practice) for continued vaccine refusal increased from 6.1% in 2006 to 11.7% in 2013 (p=0.004). They cited concern for other patients and lack of trust as the main reasons for dismissal in 2013.

In 2013, nearly all pediatricians had experienced vaccine refusals and delays. In 2013, respondents were increasingly likely to encounter vaccine refusals when compared to 2006. They reported that the number of parents who refused some vaccines had nearly doubled between study years (2.5% vs 4.8%, p<0.001), and that in 2013, almost one in five parents in their practice requested to delay one or more vaccines. For a pediatrician in a busy practice, this means that vaccine delays and refusals could be occurring daily (if not more).

Pediatricians perceive that most parents refuse vaccines because they now believe them to be unnecessary, but also continue to commonly refuse because of concerns about autism/thimerosal, as well as safety concerns about adverse side effects. They perceive that the vaccine delaying parent is doing so for different reasons than the refusing parent: delayers are concerned for their child’s discomfort and also worried that the number of vaccines given causes an undue burden to their child’s immune system. Understanding these reasons for refusals and delays can help guide conversations with these families when discussing vaccinations.

However, a recent randomized trial showed that among parents with the least favorable vaccine attitudes, intent to immunize with the measles, mumps, rubella vaccine actually declined after all strategies, including education, were employed. It is clear that better approaches must be developed and studied to achieve vaccination among hesitant parents.

Although pediatricians reported providing vaccine education at nearly universal rates, respondents in both survey years indicated that they convinced reluctant parents to give the vaccines only about one third of the time. Pediatricians who indicated that they “always” dismiss patients for continued refusal has almost doubled from 6% to nearly 12% between 2006 and 2013, despite recommendations from the AAP during that time against this practice. This month the AAP relaxed this statement somewhat in its clinical report on vaccine hesitancy, stating that, after repeated discussion and attempts to convince the parent to immunize their child are undertaken, dismissal of the patient may be an “acceptable option.”

Future research is needed to study the effect of patient dismissals on vaccination rates. Our research highlights that pediatricians must continue to advocate on behalf of their patients to receive all vaccines according to the published and studied vaccine schedules. No child should have to suffer from a vaccine preventable disease.

Catherine Hough-Telford, MD trained in pediatrics and pediatric infectious diseases at the University of Alabama, Birmingham. She is now a practicing pediatrician in Tampa, Florida.