A lecture of the type that I am used to giving is defined in the Oxford English Dictionary as “a discourse given before an audience upon a given subject, usually for the purpose of instruction”, although I always keep in mind the BBC’s mission statement, originally formulated by John Reith, their first Director–General, “to inform, educate, and entertain”, particularly the last of these. This rubric is still to be found in the BBC’s latest draft charter.

The IndoEuropean root LEG meant to gather or set in order. Anything thus eclectically gathered was ready to be read or spoken, in some dialect, perhaps to a select audience of intellectuals. The Greek derivative λέγειν meant to speak or recount and the Latin legere (supine lectum) meant to collect, take away or steal, choose, read or peruse, recite, or read about. You may read a lecture from a lectern, but you’re better to narrate it freely helped by no more than a few notes, rather than from a prepared text, boringly delivered. Lecturers can use slides as notes, but only to prompt them, not to be read out from the screen. The lexicon is full of λόγοι, the words from which you compose your text, and if you are an excellent lecturer you may become a legend, someone everyone talks about.

In this year’s course on teaching evidence based medicine, held by Oxford’s Centre for Evidence Based Medicine, I gave a lecture on how to give a lecture, with entertainment as the main purpose. I used as my main narrative structure a poem by Rudyard Kipling:

I keep six honest serving-men
(They taught me all I knew);
Their names are What and Why and When
And How and Where and Who.

Not Kipling’s greatest poem, but it gave me a handle for discussing the basis of giving a lecture, starting with when and where and going on with who, why, what, and how. Discussing the different circumstances in which medical scientists might be called upon to give different types of lecture, I invoked Jaques’s famous speech from As You Like It:

All the world’s a stage
And all the men and women merely players;
They have their exits and their entrances,
And one man in his time plays many parts,
His acts being seven ages.

This reminds us firstly that lecturing is a performance. Then, while Jaques takes us from infancy to senescence, I had a more limited life span in mind. Here are my seven ages:

Well, I hope they enjoyed it. 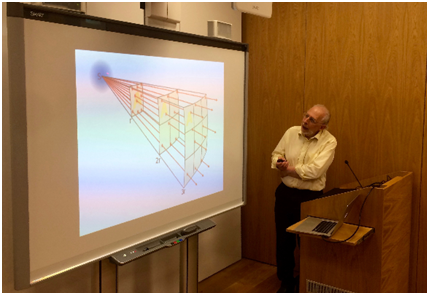 The senescent lecturer discussing the importance of the inverse square law when making yourself heard in the lecture theatre, while pointing out that reverberation helps and that the desk microphone is badly placed, being too far away from the speaker.