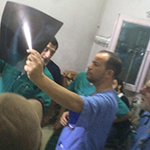 In my first medical mission to Aleppo in October 2013, I was asked to examine a toddler who had arrived at our hospital after being shot in the head by a sniper one hour earlier. He was just 3 years old. His heart was beating, but he exhibited no other signs of life. I was told that snipers had targeted him, his mother, and his sister as they tried to sprint through the passage separating the opposition-controlled east side of Aleppo to the regime-controlled west.

That two block street has now come to be known as “The Corridor of Death.” Snipers perched on the roofs of three regime-controlled buildings at the end of the passage have turned the place into a killing ground. His mother and sister were killed instantly. Their bodies were rushed to the hospital in the back of a car owned by bystanders. I keep a photo of him intubated on mechanical ventilation. He was brain dead.

During my dozen medical missions to Syria, I have had to trust smugglers and brave Aleppo’s sniper alley, crawl under border fences, jump walls, walk for hours without light over mountain passes, and wait in basements for jets overhead to pass.

But the memories that haunt me, that I cannot escape, are not of personal danger. They are the ones from the hospitals where I have worked, of those I did not have the time, the staff, or the equipment to save. 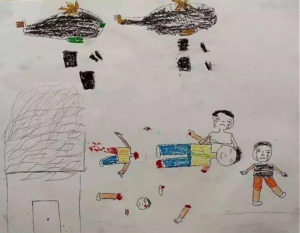 I keep a photo of a colleague inspecting the debris of M1 hospital, trying to salvage any medical supplies that can be recovered. In Aleppo, like many besieged areas in Syria, there is a shortage of basic medical supplies. Any medical items are treated as a precious commodity. The hospital was the target of what is called double-tap. A regime helicopter circled the skies before it dropped its first barrel bomb and hit the upper floor.

Hospitals are targeted frequently in Syria, especially in Aleppo, mostly by the Syrian government and lately by the Russian jets. Physicians for Human Rights reported that there have been 373 attacks on 265 medical facilities in Syria between March 2011 and this May, and 750 medical personnel killed. Most of Aleppo’s doctors have left. In the besieged eastern part of the city, only about 35 remained. My organization, the Syrian American Medical Society, reported that July has been the worst month for attacks on healthcare since the beginning of the conflict. There were 43 attacks on health facilities in the month—more than one a day. By comparison, this number of attacks occurred over six months in 2015, with 47 attacks from January to May.

My colleague, Dr Hariri, was in his office when the first of two barrel bombs hit the roof of the hospital, one of four remaining surgical hospitals in that part of Aleppo treating trauma patients. Luckily, he survived, and no one in the hospital was killed. But an intensive care patient who had chest surgery one day before sustained head injuries from the flying glass. Dr Hariri oversaw the evacuation of the hospital, relocating patients and sending emergencies to a different building, while trying to keep calm and reassure everyone. The second barrel hit the street in front of the hospital 30 minutes after the first bomb. It was a tradition in Aleppo. It is meant to cause as many injuries and deaths among the medics and volunteers who rush to help the victims.

On the way to the hospital, I saw children pointing to the sky. I could see a small dark dot and the chop-chop sound of a distant helicopter. The children were not amused, they were scared. In Syria, helicopters drop barrel bombs—barrels in different shapes and sizes stuffed with half ton of TNT and sharp metallic objects.

The high flying “dot” throws another dot. The barrel takes 30 to 40 seconds to hit the ground and explodes. It can destroy a whole building—a hospital, a fruit market, a school, or a residential block. It is a cheap weapon of mass destruction, a dumb bomb, made locally. More than two million civilians were displaced from their neighborhoods in Aleppo alone because of the barrel bombs. They ended up as internally displaced people or refugees in Turkey and Europe. Most of the patients I have seen on my medical missions were polytrauma victims of barrel bombs—children pulled from under the rubble of their destroyed homes with multiple fractures and internal bleeding, pneumothoraces, intracranial bleeding, and crush injuries. People bleed to death, lose limbs, or end up in shock after long surgeries. Many end up with lifelong disabilities due to amputation of one or more limbs, losing an eye, or being paralyzed from spinal cord injury.

I keep a picture of a drawing from a second grader in Aleppo, showing helicopters bombing the city, blood and destruction below. The dead children are smiling while the living ones are crying.

I keep a picture of a cardiologist from Hama, who had to work in a hospital called the “Central Cave Hospital.” It was dug in the heart of a mountain for protection. What kind of world are we living in where doctors and nurses have to work in cave hospitals? I visited the hospital a few months ago and was amazed by the resilience of these individuals. They insist on staying and serve their patients in spite of the risk to their lives. They deserve our utmost respect and support.

My last medical mission to Aleppo was the riskiest. I was joined by two doctors from Chicago, an orthopedic surgeon and pediatrician, to show our solidarity with the 35 remaining Aleppo doctors serving 300 000 civilians. We felt that it was our humanitarian duty to be with the doctors and nurses of Aleppo after they were deserted by the world. The road to Aleppo was under constant shelling and airstrikes by the Syrian regime and Russian jets. The regime was trying to encircle the eastern part of Aleppo that was controlled by the opposition. We survived the trip, miraculously unharmed. Other passengers were not as lucky and we saw their car wrecks on the sides of the Castello road. The stench of their trapped decomposing bodies filled the air.

I worked in an underground hospital called M10 hospital. The hospital itself has been bombed more than a dozen times. The floor often shuddered from explosions nearby.

Recently a photo of Omran Daqneesh went viral, like many other photos of Syrian children. The photos of the dead body of Aylan Kurdi washed ashore after drowning, the starving children of Madaya, the dead children of Ghouta, the victims of sarin gas, and the many children in refugee camps. We look at their photos and tweet about them. We hug our children and shed some tears. We say that they are powerful photos, but will it translate into meaningful action to protect these children? Syrian children are not dolls to cry over and then move on from.

I took care of another young boy. He was hit by shrapnel that severed his spinal cord and penetrated a lung. He was breathing hard. I had him intubated and placed on life support. The surgeon said he should be evacuated to Turkey, but the road was too dangerous. He died one day after I left. He had a cardiac arrest. He could have been saved if the skies of Aleppo were free from helicopters or jets that throw bombs or if the roads from Aleppo were safe for evacuation.

A week after we miraculously left the city, the Syrian regime cut off the last road to Aleppo. No one could get in or out for weeks. There were critical shortages of food, water, baby milk, fuel, medicine—even blood products after the regime bombed the blood bank. The only remaining female obstetrician in besieged Aleppo sent me a message that she is using the house threads to suture her patients as she ran out of surgical sutures. Children are ventilated manually as the hospital has run out of ventilators. There is a looming catastrophe over hundreds of thousands of besieged people. “In Aleppo,” the United Nations’ humanitarian chief warned last week, “we risk seeing a humanitarian catastrophe unparalleled in over five years of bloodshed and carnage in the Syrian conflict.”

See also: What can doctors do to help in Syria?

Zaher Sahloul is an associate professor at the University of Illinois in Chicago, a pulmonary and critical care specialist, and a volunteer member and senior adviser to the Syrian American Medical Society (SAMS).