According to Galen, whose views influenced the practice of medicine for hundreds of years, each of the four fluid humours of the body, αἷμα, blood, φλέγμα, phlegm, χολή, [yellow] bile, and μέλαινα χολή, black bile, was associated with a mood, called a temperament: sanguine (optimistic), phlegmatic (stoical), choleric (irascible), and melancholic (depressive). Others described other bodily fluids as humours, but Galen’s account became the universal standard.

Galen described this analysis in his book Περί κράσεων. The Greek verb κεραννύναι meant to mix or blend, often applied to wine and water, and hence to cool by mixing, or to temper. The related noun was κρᾶσις, and so Galen’s title meant On Blending Fluids. The word could also mean climate, particularly if temperate, or the temperature of the air, and also temperament of the body or mind. Crasis in English originally meant the blending of humours in the body that determined one’s state of health or disease. It was later used by grammarians to describe the combination of the vowels of two syllables into one long vowel or diphthong, as sometimes occurred in ancient Greek.

The title of Galen’s text in Latin was De Temperamentis, since temperamentum meant the same as κρᾶσις. The IndoEuropean root TEMP was an extended form of TEN, to stretch. Tempus in Latin meant both time, which stretches out behind and before us, and the temple of the head, where the skin is tightly stretched. “Temporal” describes both, although “temporary” relates only to the former. TEMP also gave the Greek word τᾰπήτιον, a diminutive of τάπης, a woven cloth, whose production involved stretching the fabric over a loom. The Latin word was tapetum, which gave the French tapis, a carpet, and the English tapestry, originally tapissery. Taffeta is from the Persian taftan, to twist or weave.

Temperare in classical Latin meant to mix in good proportions. Bach’s Well-Tempered Clavier was tuned in equal proportions, and a good temperament was one in which the four humours were in perfect balance. In postclassical times distemperare meant to mix disproportionately and hence to soak or macerate; distemper is used to paint in tempera. Distemper also meant a disordered condition of the body, ill health, or disease. Claudius tells Gertrude (Hamlet, Act 2, Scene 2) that Polonius has found “The head and source of all your son’s distemper”, but she already knows: “I doubt it is no other but . . . His father’s death and our o’erhasty marriage.” Distemper now usually describes a disease of dogs.

The four movements of Carl Nielsen’s second symphony, subtitled “The Four Temperaments” (Op. 16, 1901–2), which he dedicated to Busoni, are Allegro collerico, Allegro comodo e flemmatico, Andante malincolico, and Allegro sanguineo. Paul Hindemith’s The Four Temperaments, on which Diaghilev based a ballet, has five movements, a theme, and four variations: Melancholic, Sanguinic, Phlegmatic, and Choleric.

Emil Zola wrote, in the preface to the second French edition of his novel Thérèse Raquin, “I have sought to study temperaments and not characters. In that lies the entire book. I have selected personages sovereignly dominated by their nerves and their blood, destitute of free will, led at each act of their life by the fatalities of their flesh.”

In Tristram Shandy, Lawrence Sterne describes his alter ego, the parson Yorick, whose family was, he says, of Danish extraction, although Yorick “seem’d not to have had one single drop of Danish blood in his whole crasis; in nine hundred years, it might possibly have all run out . . . The fact was this:―That instead of that cold phlegm and exact regularity of sense and humours, you would have looked for, in one so extracted;―he was, on the contrary, as mercurial and sublimated a composition,―as heteroclite a creature in all his declensions;―with such life and whim, and gaité de coeur about him, as the kindliest climate could have engendered and put together.” Heteroclite meant eccentric but was also used grammatically to describe words that were irregularly or anomalously declined or inflected. Thus Sterne extracts linguistic humour from the temperamental humours. 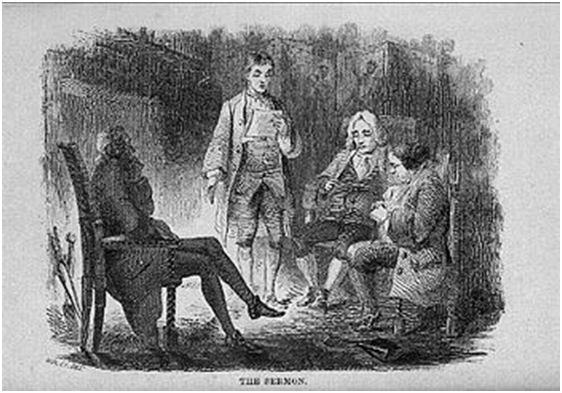 Corporal Trim reads out a sermon by Yorick at Shandy Hall (Tristram Shandy, Book II, Chapter XVII). Sterne’s Sermons and A Sentimental Journey Through France and Italy were both published under the pseudonym of Yorick.