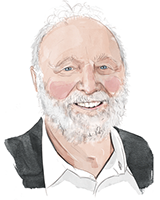 The Francis Crick Institute for bio-medical research will open today. The present Government will claim credit for it. But the project is nearing completion only because of far-sighted decisions by the Labour science minister David Sainsbury and, above all, by the personal commitment of Gordon Brown. It is a shining example of a government working with scientific institutions to keep Britain at the forefront of research and innovation.

In 2006, the Medical Research Council proposed to transfer the National Institute for Medical Research from Mill Hill to be near the existing cluster of bio-medical research facilities in London WC1 and NW1. So they bought the National Temperance Hospital site to the west of Euston Station. This proved too small for such an ambitious project and they turned their attention to a bigger site behind the British Library to the east of the station. This was owned by the Department for Culture, Media and Sport and was likely to come on the market in mid-2007.

In March 2007, the Medical Research Council, Cancer Research UK, the Wellcome Trust, and University College London set about establishing a partnership to progress the project. Gordon Brown made clear to all parts of the government machine, including the Department of Culture, Media and Sport, that the project had his full support, that it shouldn’t be delayed by wrangling over the cost of the site or protracted arguments about the eventual contributions of the various partners. The cabinet secretary, Jeremy Heyward, had the full authority of the prime minister’s office to expedite all decision making.  The creation of the new institute was announced at the end of 2007.

Gordon Brown was personally involved in the discussions with the various partners including Sir Mark Walport, director of the Wellcome Trust. To avoid all the usual complications about who would pay for what and from which budget, the prime minister got the Wellcome Trust to buy the site and hold it on behalf of all the partners under a “warehouse” agreement pending the transfer of the freehold to the consortium members as tenants in common. A special executive project team was established in early 2008, led by John Cooper, formerly director of resources at Wellcome. They supervised the work of a multi-disciplinary group of engineers, architects, cost managers, planners, lawyers, and security advisers. A scientific planning committee was set up to advise on the design and equipment of the laboratory to ensure it met the needs and reflected the aspirations of the scientists and clinicians. This was chaired by Nobel Prize winner Sir Paul Nurse who went on to become director and chief executive of the Francis Crick. The design was unveiled at the end of 2009.

Originally the cost of the institute was to be met from the central government large facilities capital fund, from the sale of the Temperance Hospital site and the eventual sale of the site at Mill Hill when it was vacated. The whole project was approved in early 2010—a record short time-scale for such a complex project especially in view of the potential delays from the involvement of so many “partner” organisations. The incoming coalition government agreed to let the scheme go ahead. However, business secretary Vince Cable and chancellor George Osborne refused to finance it from the larger projects capital fund but insisted instead that the central government contribution should be met by a £220 million capital funding raid on the Department of Health.

Bio-medical research is a sphere in which Britain excels and which brings great benefit to humankind by identifying new and better ways to promote good health and to prevent and treat ill health. The research itself provides worthwhile and challenging jobs with a future. But it doesn’t end with the research.   Developing, manufacturing, and promoting the use of its products and treatments will provide other worthwhile jobs with a long-term future as well as a welcome favourable contribution to our balance of trade.

The Francis Crick is set to play an important role in our scientific and industrial future. The project itself is the product of remarkable individuals and far-sighted organisations working in partnership to achieve a common goal. They must all be congratulated. However, I am convinced that without the assertive personal commitment of Gordon Brown and his louring presence, the whole thing would have been enmeshed for years in the coils of inter-departmental wrangling that so bedevil and delay the usual processes of government. So when they open the Francis Crick, I hope they will raise a glass to the man from Kirkcaldy.