The President of the Royal College of Surgeons of Edinburgh has asked Jeremy Hunt, the secretary of state for health (the SoSH), in a letter that also dealt with other more important matters, to find a less pejorative term to describe “junior” or “trainee” doctors, since “they are highly skilled, dedicated professionals and should be recognised as such.” Possible alternatives include “young doctors” and “non-consultant hospital doctors,” which isn’t very catchy; another suggestion, “Doctors In Training,” would make them acronymically ditzy.

“Junior” is from the IndoEuropean root YEU, vital force, youthful vigour. A yeoman was originally a young noble who served with the royal family. A Junker was a young German noble, then a narrow-minded, overbearing younger member of the Prussian or other aristocracy, and later a reactionary aristocrat who aimed to maintain class privileges.

The name of Jupiter, king of the Roman gods, comes from a different IndoEuropean root, DYEU, meaning the shining sun or the sky, and hence heaven, giving all sorts of divine names, such as Jupiter’s Greek counterpart Zeus; Diana, Dionysus, Aphrodite, the Dioscuri (Castor and Pollux), Dione, and Diomedes; Divona, a queen of the Roman gods, later known as Juno; the Sanskrit god of the sky, Dyaus; and the Norse god of war, Tiu. Jupiter is literally “deus pater,” “god [the] father,” but was there a hint of YEU in it too, flattering the god’s youthful vigour? Iuventus was the goddess of youth, but also a name that some gave Jupiter.

“Junior” is the Latin word iunior, a shortened form of iuvenior, the comparative form of the adjective iuvenis, young. The iuniores were young men of military age, which the Romans counted to be somewhere between 17 and 46 years; not necessarily so young. As an adjective, iuvenis could also mean young in appearance or in a youthful condition, fresh and vigorous like a plant. As a noun the word was epicene, referable to either men or women. The adjective iuventus meant young and iuventa aetas was youth. The noun iuventus, like the football club, meant young men collectively, and specifically men of military age. Princeps iuventutis was a title given in republican times to the leader of the equites, members of an equestrian order who provided their own horses; it was later applied to any imperial son.

YEGUA was a related IndoEuropean root meaning youthful force. Hebe, Ἥβη, was the Greek goddess of youth and the gods’ cupbearer, and ἥβη was youthful vigour or early manhood, around the age of 16. The German psychiatrist Ewald Hecker coined the term hebephrenia in 1871 to describe a form of psychosis that began in adolescence. In Greek ἔϕηβεία meant a citizen aged 18–20. The English word is ephebe. Ephebic doctors perhaps?

Of course, “junior” can sometimes be used pejoratively. One recalls for example, Indiana Jones’s annoyance at constantly being called “Junior” by his father, Henry Jones, in Spielberg’s film “Indiana Jones and the Last Crusade”, in which Sean Connery played the father, although only 12 years older than Harrison Ford, playing the son.

When Joseph McCarthy hounded those he suspected of being communists during the 1950s, he was denounced by the journalist Edward R Murrow, who called him both “Senator McCarthy” and, with clear critical intent, “the Junior Senator from Wisconsin”, which McCarthy was. David Strathairn portrayed Murrow in George Clooney’s movie “Good Night, and Good Luck” (2005), well conveying Murrow’s style.

In The Anatomy of Melancholy (picture), Richard Burton, who didn’t mind using the pseudonym “Democritus Junior”, tells how Solon poured spring water steeped in black Hellebor into the water supply of a city he was besieging, “and so either poysoned, or else made them so feeble and weake by purging, that they were not able to beare armes.” Black hellebore (Helleborus niger) is indeed a purgative, by virtue of the cardiac glycoside-like compounds it contains, but you would need to take a large and potentially dangerous dose to achieve the desired purgative effect. It is no surprise therefore that Burton also reports that “[Hellebor] is still oppugned to this day by Crato and some Junior physitians.” Wise Juniors. 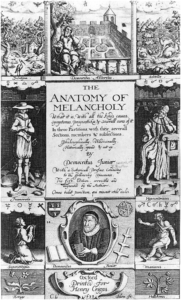 The frontispeice [sic] to The Anatomy of Melancholy by Richard Burton. Burton (“Democritus Junior”, as he called himself) is shown in the picture at the bottom.

The bottom left and right panels (or “sceanes”) depict Borage and Helleborus,

Soveraigne plants to purge the veines,
Of melancholy, and cheare the heart,
Of those blacke fumes which make it smart.
To cleare the Braine of misty fogges,
Which dull our sences and Soule clogges.
The best medicines that ere God made
For this malady, if well essaid.

Postscript from the author (added 9 September 2016): There are other areas in which the word “junior” is not considered pejorative. In a letter to The Times on Wednesday 7 September, Anthony Radevsky wrote from the Falcon Chambers in London, reminding us that all barristers who are not QCs are called “juniors”, however old or experienced they may be. One recalls that John Mortimer’s creation, Horace Rumpole, was in fact rather proud of being “a junior barrister in status if not in years”. There is a difference between being young and being youthful.